The American Association for Justice (formerly the American Trial Lawyers Association) has published a list of the 10 worst insurance companies (in terms of customer abuse). Given the source, this needs to be taken with a big grain of salt. But still, it makes one nervous to see one's insurance company near the top of this particular list...

Posted by Unknown at (permalink) 11:39 AM No comments:

The upcoming campaign (McCain vs. Obama) is going to produce a lot of political humor – including the iconic political bumper snickers:

Posted by Unknown at (permalink) 11:28 AM No comments:

Residents of the San Diego Rural Fire District voted recently on whether to assess all property owners a new tax ($120/year for homes, other amounts for other kinds of property). The tax was voted down, by a very narrow margin. The votes were weighted according to assessed value of property, but the margin was so small that a single vote could have swung the outcome the other way.

I was against this proposal, for reasons I detailed in this post. I'm glad it failed. Two things particularly bother me, however.

The first is the cost of running the election. When I saw the slick, multi-color pamphlet promoting the new tax (this came with the ballot, and no counter-argument was included), I knew this was an expensive election. Now I know how expensive it was:

The election, which was run by a private firm, Koppel & Gruber Public Finance of San Marcos, cost about $26,000, Nissen said. The district mailed 3,458 ballots. On Wednesday night, two members of the consulting firm and three people from the fire district counted the 1,338 ballots that were returned.

That's money we could have used for actual fire protection. Just to cite one obvious example: we could have cleared a lot of brush around structures for $26,000!

The other issue bothering me is the lack of secrecy in the vote. As the Union-Tribune article says:

At a public hearing before votes were counted Wednesday, several residents said they were upset about the non-secret ballots. They said they feared firefighters wouldn't respond to an emergency at their houses if they voted against the tax measure.

You don't have to be a rocket scientist to know that having firemen count the vote, looking at every ballot, is going to be intimidating to some voters. The most likely result is that some voters who opposed the tax measure would simply not vote – afraid to vote no, unwilling to vote yes.

Shame on the Fire District for (a) wasting taxpayer money on a sham election, and (b) structuring the election to intimidate the voters.

I'd sure like to see reform of our disjoint fire districts along the same lines as the way San Diego County Operations reformed itself decades ago. Governments from around the world come to see our county operations, marveling at its efficiency and service levels (which are, in fact, stellar compared with most governments – though, sadly, not when compared with for-profit businesses). People everywhere marvel at the unrelieved stupidity of our fire protection organizations, and they wonder how many massive firestorms the population will have to endure before they throw the bums out and get a real fire protection organization...

Posted by Unknown at (permalink) 10:00 AM No comments:

Just ran across this clip, which caused me for the (approximately) 80 millionth time to wonder just what the hell is wrong with the electorate who keeps returning this guy to the Senate:

Here's an interesting resource that I just came across: a web site that provides current MLS real estate listings for San Diego County, and also recent closed sales. Looking at the listings and closures nearest to me, and which I have personal knowledge of, it appears to be accurate...

Posted by Unknown at (permalink) 5:35 AM No comments:

In a daring bid to wrench attention from his Democratic rival in the 2008 presidential race, Sen. John McCain (R-Ariz.) today embarked on an historic first-ever visit to the Internet.

Given that the Arizona Republican had never logged onto the Internet before, advisors acknowledged that his first visit to the World Wide Web was fraught with risk.

But with his Democratic rival Barack Obama making headlines with his tour of the Middle East and Europe, the McCain campaign felt that they needed to "come up with something equally bold for John to do," according to one advisor.

McCain aides said that the senator's journey to the Internet will span five days and will take him to such far-flung sites as Amazon.com, eBay and Facebook.

I can't believe I just linked to the Puffington Host! 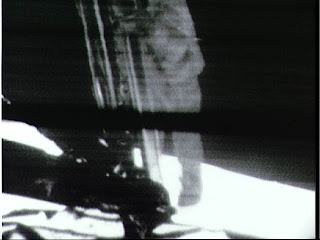 Here's yet another fantastic resource appearing on the web: an archive of NASA's imagery. The collection stretches all the way back to NASA's earliest days.

Wandering through this collection this morning triggered all sorts of happy memories for me. I was a young lad during NASA's first years, and I followed the space program with intense interest. Relatively little of it was available on television (the public just wasn't all that interested, and the technology was a bit primitive). Mostly I read news reports, read books, and perused the images in National Geographic. Those were heady days for me, and the few live events that I got to see are vivid memories. The best of them all: watching television in my uncle's basement in the middle of the night when Armstrong and Aldrin landed and walked on the moon (Apollo 11, TV frame at right).

The Ranger project (small satellites aimed at the moon, taking photos until they crashed into the surface) and the Surveyor project (robotic lunar landers that provided the first detailed information about the surface of the moon) were particular interests of mine in the early '60s. I was fascinated by the challenge the engineers faced, using the very best of the day's technology to explore our nearest neighbor in the solar system. It's probably hard for young people today to imagine just how daunting the engineering challenge was. The early robotic missions had very high failure rates. I remember well on the earlier Ranger missions that the little satellites either missed the moon completely, missed their target on the moon, or had failures that prevented them from operating correctly. Only on the last few Ranger missions did the engineer succeed: they hit the moon, they hit their intended target, and the instruments and cameras operated all the way until impact. Today we do amazing things like manuever the Cassini satellite with pinpoint accuracy in its travels around Saturn and visits to its satellites, and put down a Martian lander right where we wanted it – utterly unthinkable feats in the '60s.

If you have any interest at all in space exploration, you'll be amply rewarded by a visit to this site...