Ah, the joys of home ownership!

Ah, the joys of home ownership!  Or not.

A couple of weeks ago I noticed that our water pressure tank slowly lost pressure even when every tap was off.  That's the sort of thing associated with a slow leak, like a dripping faucet – but I had none.  I made a note to myself to keep an eye on it, as this would cause our cistern pump to operate more than it should – and that means wear and tear on the pump, and higher electricity cost.  It took almost an hour for the pump to cycle on, so I didn't think of it as urgent.

A week ago, I checked the cycle time.  Oh oh – it was down to 10 minutes.  The leak is getting bigger!  I turned off the water coming into the house (the pressure tank is outside, in our pump house).  Still leaked.  Ok, that proves the problem isn't in the house – but that's worse, as all the places for a leak are in pipes four feet underground.  Those sorts of leaks are notoriously difficult to locate, because all you can do is look for a wet spot – and the leak could be anywhere within 20' of that spot.

So I started checking very carefully around the yard where I knew the water line was running.  Naturally, the wet spot, when I found it, was in the very last piece of the yard I checked: the stretch of pipe between the pump house and our underground cistern.  That pipe is just 12' long –  and 3' from the cistern I found a (very) wet spot.  There was standing water on the surface, over a week since the last rain.  Not good. 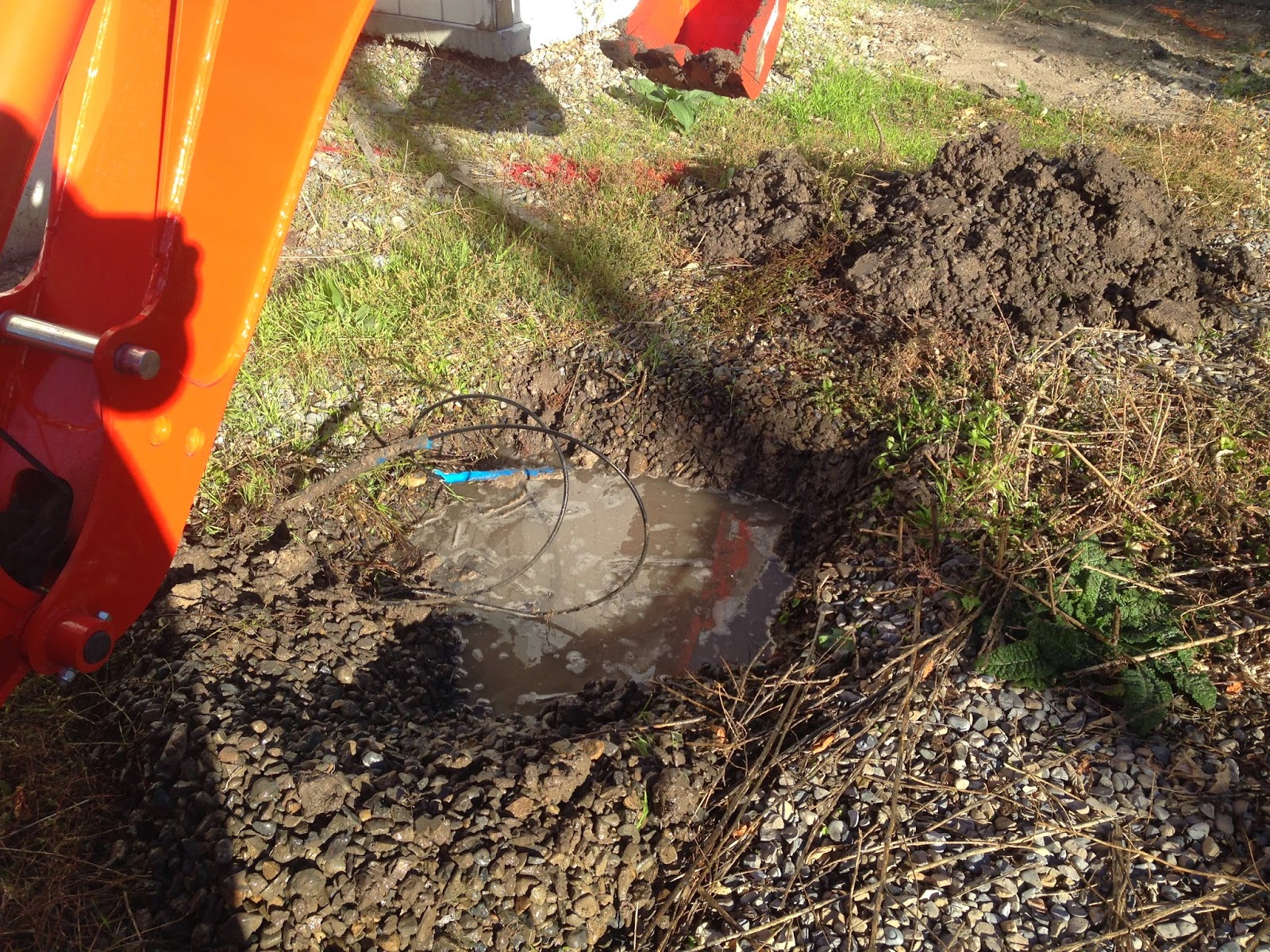 Yesterday morning I cranked up the tractor (backhoe attached) and headed over to that wet spot.  I knew the pipe was 46" underground, because I could actually see (and measure) where it went into the cistern: a 2" galvanized pipe.  So I dug a hole about 6' in diameter and 40" deep, so I didn't risk chewing up the pipe (or the close, parallel conduit for the pump's power).  The photo at right shows the place after my first few buckets of glop came out.  The blue conduit is for a disused piece of cable TV coax that I knew was there and just chewed through.  When I finished that backhoe work, the bottom of the hole had about 3" of standing water and the bottom soil had the consistency of wet modeling clay: a sticky, gloppy, gluey mess.  There was one piece of good news, though: I could see a swirl of clear water coming up through the otherwise muddy glop.  That was where the leak was, and it was within the first hole I dug – I got lucky on that.  Once I knew roughly where the leak was, I shut off the pump (so no more water would leak into the hole) and moved on to the next step. 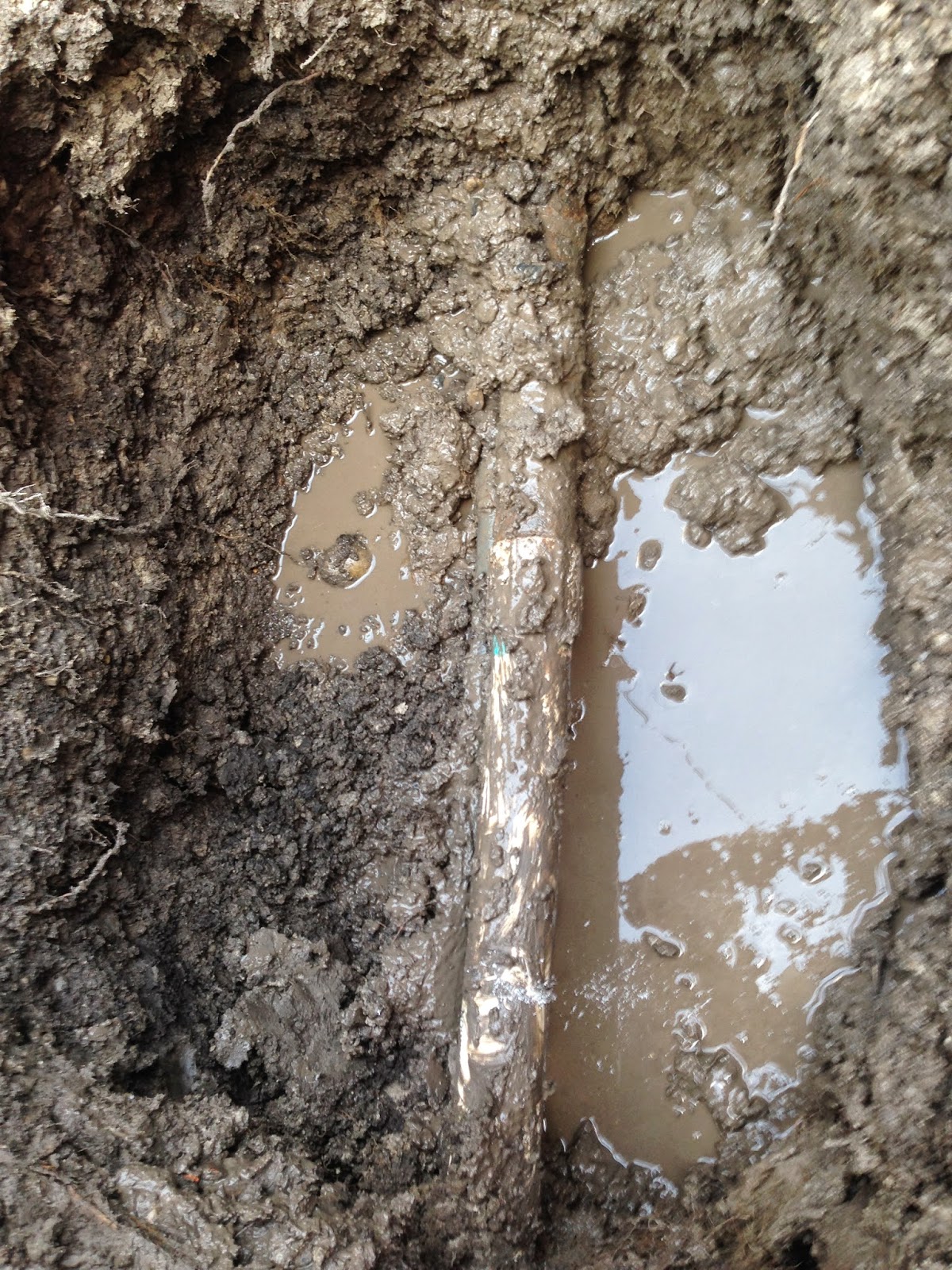 I had no real choice but to hop down into that lovely mess at the bottom of the hole with a shovel and start digging, so I did.  Man, that stuff was really hard to dig in!  Before I jumped in, I used a sump pump to get most of the water out – I only had a gallon or two left.  It took me just over three hours to get that last 6" of soil off, locate the pipe and conduit, and then dig another 6 inches to get the pipe in the clear.  The photo at right shows what the pipe looked like after I got it clear the first time.  I had to do this repeatedly, as the sides of the hole kept slumping in (because they were so soft and gloppy).  Once I could see the pipe, I could tell that the leak was occurring right where a PVC adapter screwed onto the threaded male end of the galvanized pipe that went into the cistern (visible just above center in the photo).  I turned the pump back on, and I could see water coming out exactly where the galvanized pipe became visible.  It seemed like the most likely source of the leak was a crack in that PVC adapter (these occur when people over-tighten them).  So I ran to our local hardware store and bought a slip-joint repair coupling and a new adapter.  Then I sawed through the PVC about a foot from the end of the galvanized pipe and unscrewed the adapter. 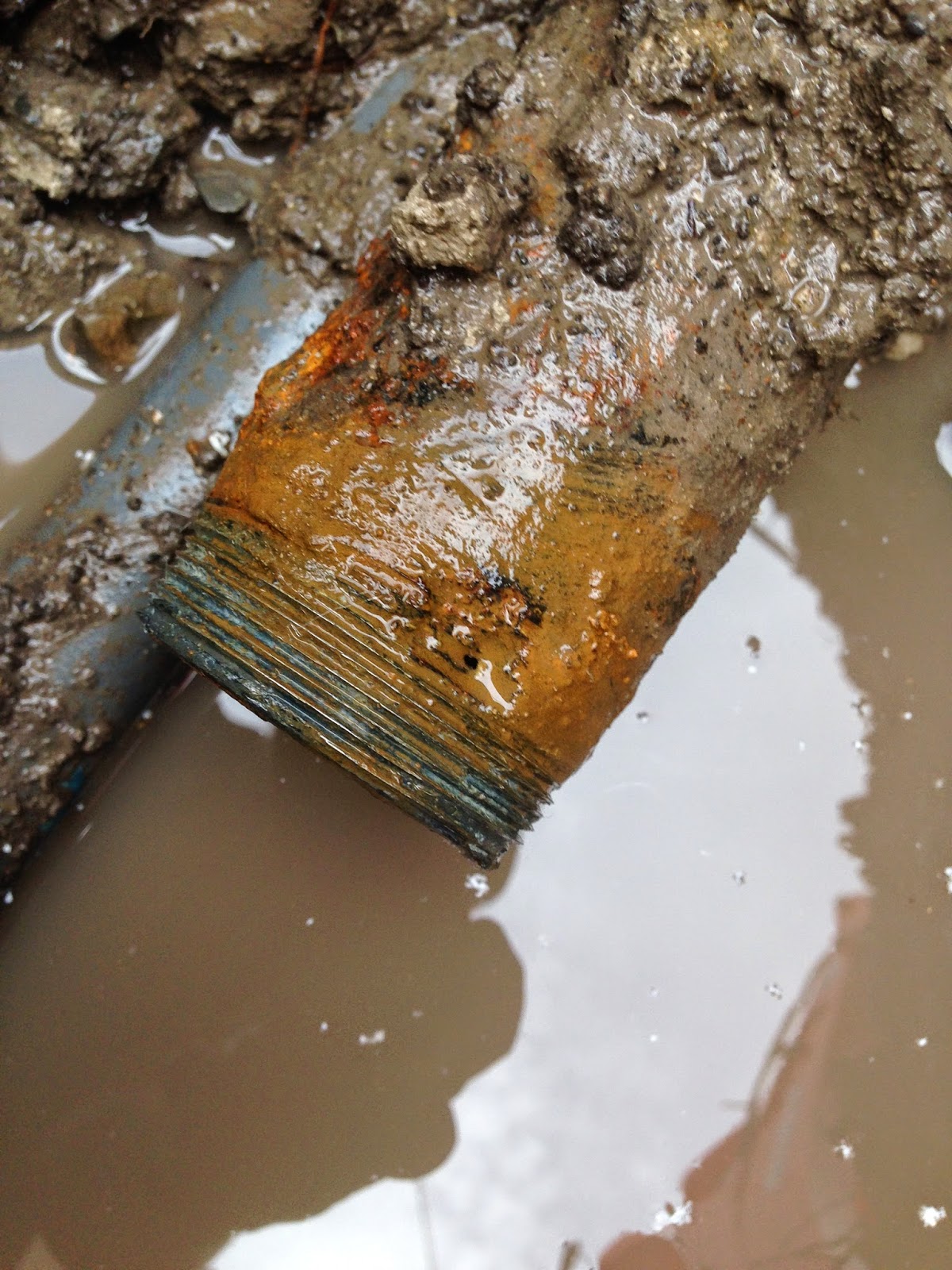 That's when I discovered that my assumption was wrong: it wasn't the PVC adapter after all – there was a tiny hole in the galvanized pipe, right in the thread cut, where it was just barely hidden by the PVC adapter but not covered in any water-tight way.  This is visible in the photo at left, a tiny black void with brightly reflecting water just to the right of it.  Galvanized pipe is a real pain to work with.  The right way to fix this would be to saw off a few inches of that pipe and re-thread it – but the tools used to thread 2" steel pipe are quite large, and I'd have to have a gigantic hole to make that work.  At this point my goal changed: I wanted a temporary fix that would let me turn the water back on – and then call in the pros, who hopefully would know a way to fix this right.

So off I went to Lowe's to get some epoxy putty that cures in wet spots.  I figured I could apply a patch to the inside of the galvanized pipe, then reconnect the PVC with the repair coupling.  When I got home, I put the putty on – and that appeared to work great.  Then I ran into a completely unexpected problem: the repair coupling wouldn't fit onto the PVC pipe.  The problem was that the PVC pipe and the galvanized pipe weren't perfectly aligned, which the coupling requires.  Dammit!  How could the pipes get out of line?  Well, my best guess is that the ground shifted over time since these were installed in 1992, and that caused the PVC pipe to bend to accommodate that shift.  When I sawed the PVC pipe, it straightened itself out – and now wasn't aligned.

At this point it was getting late in the day, I was really beat, and I was covered in mud from head to toe.  I just wanted to take a shower and go to bed – but the water wasn't connected.  Dang.  So I ran back to Lowe's and bought a different kind of repair coupling that I'd seen, one that uses compression fittings and can accommodate slight pipe misalignment.  Back home I went, and installed that thing.  I was able to install it, but I couldn't get the compression fitting to properly seat itself.  When I turned the pump on, it leaked about 10 times as much as the original leak.  That's the wrong kind of progress!  But I decided to pack it in for the evening.  I turned on the pump, took a quick shower, filled the teapot (for my morning tea), and ran out to the pump house in my bathrobe to shut it off.  Then I went to bed, exhausted and not a little frustrated.

Before I went to sleep I remembered a trick we used back on the farm I grew up on, to connect pipes at weird and arbitrary angles.  The trick took four 90° elbows, but it had the distinct advantage of always being able to accommodate the angle.  I resolved to run to Lowe's in the morning, get the parts, and implement that solution. 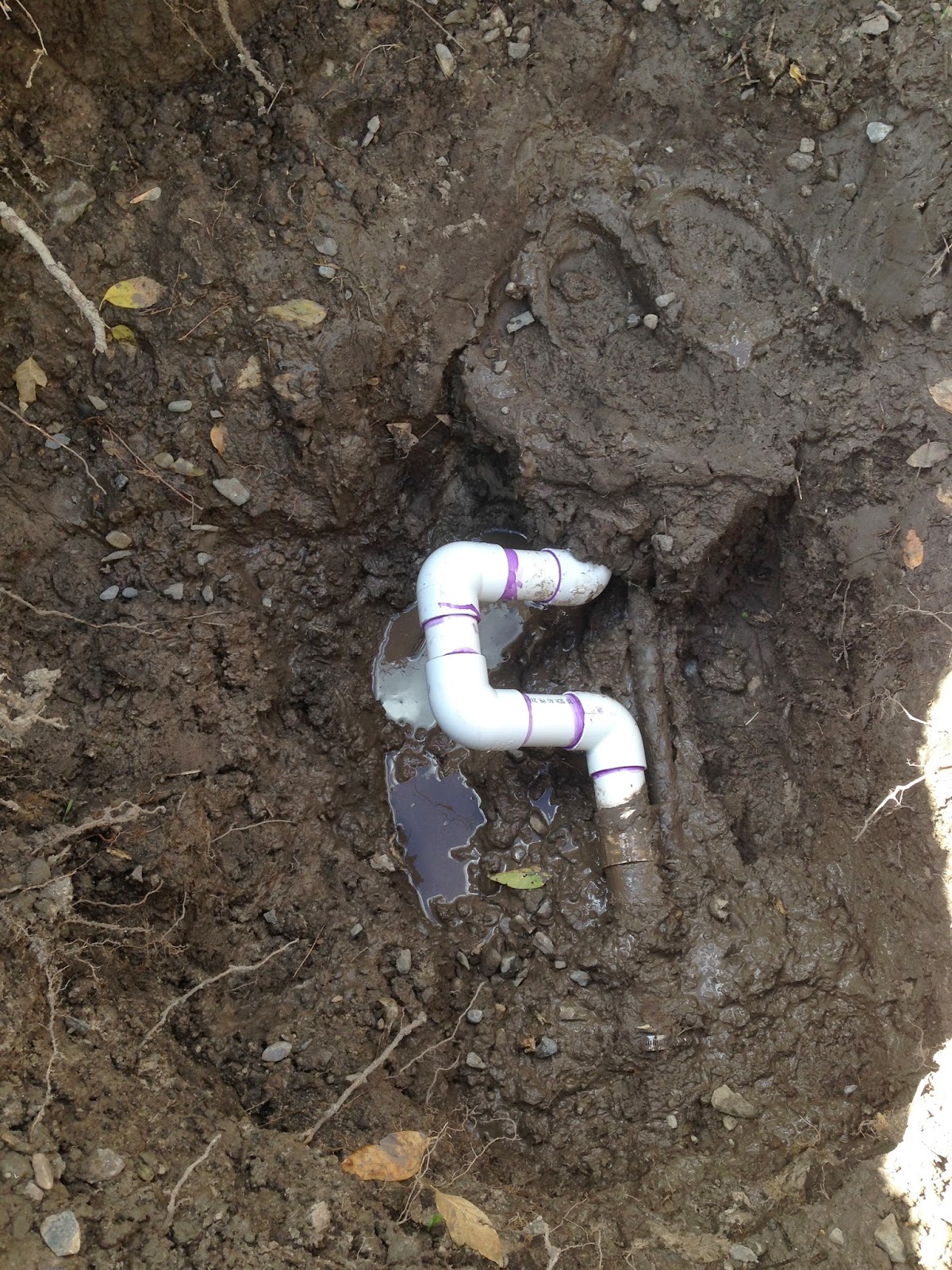 Which I did, and the finished repair is in the photo at right.  The top elbow is partly hidden by some overhanging mud where I sat to make the repairs.  This looked so good!  All the pipes fit properly, and I expected this to do the trick.  And when I turned on the pump and carefully inspected it (which I jumped down into the hole to do), everything looked great.  The pressure went up to 80 psi (our normal pressure), the pump shut off, and the pressure held steady.  Hooray!  I started to clean up all the tools and junk lying around when all of a sudden there was a big pop! and a huge geyser of water shot up out of the hole.  One of the joints had popped out, and my entire pressure tank was emptying into the hole I'd dug.  Sheesh.  The joint that popped was in the elbow at top-left, the joint to the right.

So I shut the pump back off.  I felt like crawling into a closet somewhere and crying, but I pumped the hole back out, shoveled out the mud that the flood let in, and set about figuring out what went wrong, and how I could avoid it again.  First thing I did was to saw off the two elbows and vertical piece of pipe in the photo above.  Once I did that I got a good look at the joint that popped.  I could see that it hadn't been seated all the way into the elbow.  Problem one.  Then I read the glue can carefully, and discovered that at the temperature outside (49°), I should have let the glue cure for two hours before pressurizing the system.  I'd only let it set for five minutes or so, which is what I'd done for the last few hundred PVC joints I've made. 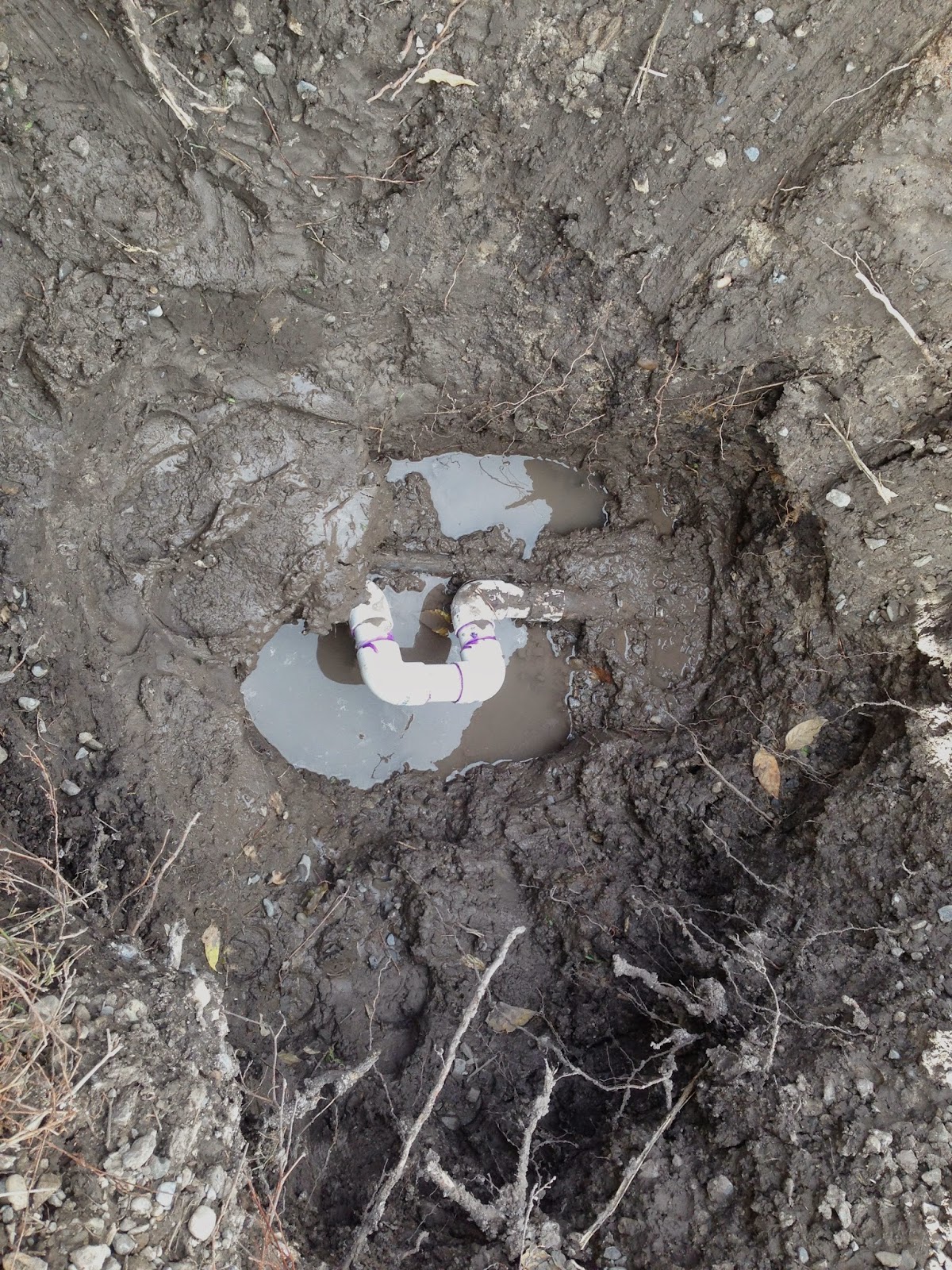 So ... back to Lowe's I went, bought two more elbows, came home, and rebuilt the repair joint with slightly shorter arms.  The result is in the photo at right, as viewed from a different side of the hole.  I finished this at 2:45 pm, and I'm waiting until 4:45 pm – just a few minutes from now – before I turn on the pump.  If it fails at that point, it's too late – and I'm too tired – to fix it tonight.  I'm not sure what I'll do in that case.  Hopefully it will just work.  I'll update this post with the results...

Update 4:55pm: it worked, at least for now.  I'm taking a shower before something else goes wrong :)
Posted by Unknown at (permalink) 3:35 PM No comments: I find this completely unsurprising...

I find this completely unsurprising...  92% of all mass shootings in the U.S. since 2009 occurred in areas where ordinary citizens aren't allowed to carry guns.

Where we live today is most definitely not one of those gun-free zones :)
Posted by Unknown at (permalink) 7:19 AM No comments:

The story of PING...

If you're a programmer of a certain age...

If you're a programmer of a certain age ... I'm sure you've had an experience like this: you write a program, it's released, then years later you check out the source to extend or fix it – and discover, to your surprise, that you're the author of it.  It's happened to me on quite a few occasions :)  Here's a great story of it happening to someone a tad younger than I...
Posted by Unknown at (permalink) 7:15 AM No comments:

Presidential speeches, going downhill...  According to the study that produced the graph at right, the reading level (sophistication, wordiness, vocabulary, etc.) of presidential speeches has been going down for a long, long time.  The study used the Flesch-Kincaid readability tests to objectively assess the speeches, which are somewhat controversial amongst language scientists.  The analysis points out something that these tests completely miss: the impact of a speech upon its listeners (or readers).  The Gettysburg Address, for example, scores very modestly on the Flesch-Kincaid tests, but has had an outsized impact.

I'm not sure what to take away from this, but it's definitely ponder-worthy...
Posted by Unknown at (permalink) 7:11 AM No comments: