The trailer goes to work... 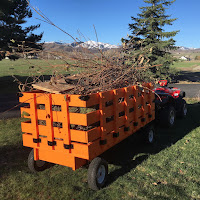 The trailer goes to work...  I actually used it a bit yesterday, to pick up trash.  But this morning I used the trailer for its intended purpose, for the first time: hauling brush.  Prior to building this, I had two inferior choices.  I could use the small commercial trailer I have for the ATV (holds 1/3 cubic yard, and nothing over 30" long), or I could use the forklift on my tractor (great for big branches, but worthless for the smaller stuff that is the vast majority of the waste I produce when pruning).  Over the past couple of days I pruned three trees and two shrubs, making four good-sized piles of brush scattered around the yard.  With the trailer I was able to compress them all down into a single load, and take them to my brush pile without leaving a trail of trash behind me.

One of the trees (a red-leafed plum) and the two shrubs (unidentified, but I think they may be Syringa) were originally grafts – one plant was used for the root-stock, and the other for the more decorative above-ground plant.  All three of these have sprouted prodigiously from the root-stock, sending nearly vertical branches heading for the sunlight.  On the plum some of them had reached 8' in length.  On all three plants, when they were in leaf I couldn't see the trunk and didn't realize that I had sprouting root-stock.  Right now, with no snow and the leaves just starting to bud out, I could easily see what was going on.  It took quite a bit of pruning to get them all.  Between the three plants, I'd guess there were close to 100 of these branches, from 1/4" or so to an inch in diameter.  About half of them were too big to cut with the short-handled loppers I have (at right), so I had to saw all of them.  The plants sure look a lot better now!  The plum had been struggling, so I'm hoping that the roots will be devoted to nourishing the desired top-stock now, and it will get healthier...
Posted by Unknown at (permalink) 8:03 AM No comments:

Paradise ponders...  Debbie and I drove up to Hardware Ranch (and on toward Ant Flats) last night, late enough so that the sun had just set when we got back.  For much of our trip, the sun was at a low angle, just over the Wasatch Mountains to our west.  This made for some interesting lighting.  We also took my spotting scope, and I tried for some wildlife photos.  Given that I was hand-holding the camera (as they don't make a holder for the iPhone 6S+ that I have), I'm pleasantly surprised by the results.  The photo at right was taken looking down toward the residences and barn at Hardware Ranch, from a corner of the “back” way up to the visitor's center.  We don't know what those trees are with the yellow branches, but we've been watching them get more and more yellow as spring approaches.

We spotted this raptor sitting on the ground about 150' from Ant Flats Road, sitting in grass nearly as tall as it was.  After looking at it for a bit in the binoculars, I set up my spotting scope to get a photo.  Naturally, that caused the bird to fly away – to about twice as far from me :)  The photos would have been much better if the little so-and-so had stayed put!  After considering its perch-on-the-ground behavior and its appearance, we're pretty sure this is a juvenile Northern Harrier.

At the 5M cabin (by a set of gorgeous waterfalls), Debbie spotted this pair of Sandhill Cranes; female on the left, male on the right.  She spotted them first as we were driving behind a little knoll that obscured them, and when we popped out from behind the knoll it took her several minutes to find them again.  I thought she had imagined them :)  These two were brightly backlit by the sun at a low angle (see their shadows), which is a difficult photographic setup, as my spotting scope was looking nearly into the sun.  I'm really surprised how well this shot turned out.

After we turned around and headed home, we spotted a large herd (around 50 animals) of elk on a hillside about a mile west of us.  At that point we were in the shade of the mountains alongside us, but the elk were around 600 or 700 feet higher than us, and brightly lit by the setting sun.  It was a pretty scene even by eyeball, and even better in the binoculars or spotting scope.

What a great drive that was!
Posted by Unknown at (permalink) 5:39 AM No comments: