WTF? How Could This Be?

Someone observed a strange phenomenon and wanted an answer:


Every once in a while, my eighth-inch audio jack will slip loose and I'll seemingly lose only the voice part of a track -- leaving somewhat of a "karaoke" version. What I would guess about how audio plugs work suggests that I'd be making this up; however, I've asked and others tell me they've experienced this as well.

What causes this stripped vocals from audio when a 1/8' audio jack is partially unplugged?

The author of this question couldn't believe this was happening himself.  But I can easily imagine observing this myself, and becoming obsessed with getting an answer to this unexplainable, but repeatable, observation.  It's a bit like walking outside and seeing your car floating three feet in the air – but only when you've accidentally left your front door ajar on your way out.

Naturally, our geeky questioner went to the best crowd-sourcing site around for answering questions on electronics: Electronics StackExchange.  And they got an answer – a sensible, plausible, clever, and unexpected answer.  Go there and read the first answer on this post – it's a classic...
Posted by Unknown at (permalink) 8:25 AM No comments:

Iran Sanctions Appear to be Working...

Iran's currency is in hyper-inflation.  Bad for Iran's citizens, but worse for Iran's addled government...
Posted by Unknown at (permalink) 8:18 AM No comments: 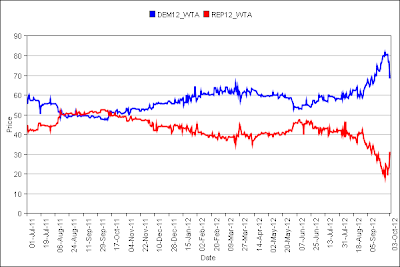 That's the consensus, from every point on the political spectrum.  Achieving a consensus like that is an achievement in and of itself :-)

I've got a big link roundup below for your edification. I don't think I'm exaggerating a bit when I say that the conservative pundits are over the moon, and the liberal pundits are howling in despair.  Speaking as someone whose desired outcome from this election is “not Obama”, if this same mood percolates to the electorate, then I'm a happy guy.

But I didn't have anything like the intensity of the emotional response of either group of pundits.  If I said the response of the liberal pundits was a “0”, and that of the conservative pundits was a “99”, then my own response is about a “51”.  Why?  Because I heard Romney making lots of big-government arguments last night, and that's most definitely not what I'd like to see in the country's chief executive.  For example, Romney made it clear that he has no intention of cutting federal education spending, or of even rationalizing military spending.  That's a big-government pol speaking, not the kind of pol that wants to slash the size of government.

Here's how I put it to my wife last night: it's as if we were planning a big night out, but someone forced us to choose between going to McDonalds or going to Burger King.  I badly wanted squash soup, lobster, and tira misu – but the choices I have are limited to a Big Mac or a Whopper.  I like the Big Mac better than the Whopper, but damn it, I wanted the lobster!  That's how I felt after last night's debate.

My own analysis, for what little it's worth: as a debater, Romney won – he absolutely smashed Obama into the dirty stage floor, and looked like he enjoyed doing it.  On the merits of the arguments, Romney also won, though much less convincingly.  There were some good zingers (pointed out in the linkfest below), mostly in favor of Romney.  The Iowa Electronic Markets took a bit jump this morning, in Romney's direction (though they still favor Obama by better than 2:1), an indication that people putting their money where their mouth is are having a similar reaction...

Bob Owens' tweet must sum up how the Obama team is feeling this morning (sorry, Bo):


Some people eat when they get depressed. I hope Michelle put Bo outside for the night.