Bolton on Israel and Iran...

Today's Wall Street Journal has a fascinating short analysis piece by John Bolton (aka “The Mustache”). His forthright manner and adult analysis stand in stark contrast to the gobbledegook we're treated to by the Obama administration on this topic. His conclusion:

This brief survey demonstrates why Israel's military option against Iran's nuclear program is so unattractive, but also why failing to act is even worse. All these scenarios become infinitely more dangerous once Iran has deliverable nuclear weapons. So does daily life in Israel, elsewhere in the region and globally.

Many argue that Israeli military action will cause Iranians to rally in support of the mullahs' regime and plunge the region into political chaos. To the contrary, a strike accompanied by effective public diplomacy could well turn Iran's diverse population against an oppressive regime. Most of the Arab world's leaders would welcome Israel solving the Iran nuclear problem, although they certainly won't say so publicly and will rhetorically embrace Iran if Israel strikes. But rhetoric from its Arab neighbors is the only quantum of solace Iran will get.

On the other hand, the Obama administration's increased pressure on Israel concerning the "two-state solution" and West Bank settlements demonstrates Israel's growing distance from Washington. Although there is no profit now in complaining that Israel should have struck during the Bush years, the missed opportunity is palpable. For the remainder of Mr. Obama's term, uncertainty about his administration's support for Israel will continue to dog Israeli governments and complicate their calculations. Iran will see that as well, and play it for all it's worth. This is yet another reason why Israel's risks and dilemmas, difficult as they are, only increase with time.

My read of his piece is that he fully expects Israel to attack Iran's nuclear facilities, and sooner rather than later. He sees the Obama administration's stance as accelerating this possibility, rather than delaying it (as Israel must be less certain of U.S. support now than at any time since at least the Carter era, and probably back to the time of Israel's founding). The longer Israel waits, the worse the tactical situation. Mr. Bolton also believes that the inevitable Iranian retaliation for such an Israeli attack will most likely take the form of “unleashing” Hezbollah and Hamas for terror attacks inside Israel.

I'd sure feel better about the Obama administration's foreign policy if we got this kind of analysis, supporting their positions, from someone on the team...

Posted by Unknown at (permalink) 4:09 AM No comments: 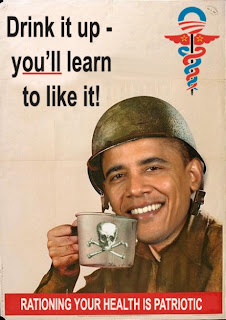 Over at Michelle Malkin's place. There's lots more like the one at right...

Posted by Unknown at (permalink) 3:42 AM No comments: