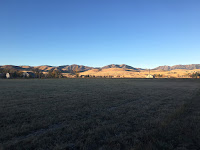 Paradise ponders: beautiful fall morning edition...  It's another gorgeous day in Paradise, folks.  I took the photo at right a few minutes ago.  It's looking southwest over our alfalfa field, with the morning's first sun rays lighting up the Wellsville Mountains to our west.  Our valley floor will get sunlight in the nest few minutes...

Debbie's coughing persists, so yesterday morning we ventured off to the urgent care again (if you're counting, that's the fourth time since she first got sick on the 7th).  We were ... less than satisfied with the outcome there.  The doctor on duty listened to us politely.  One of the things we told him is that the cough medicine Debbie had used for years to combat her cough-after-a-cold problem was benzonatate – but it no longer worked for her.  He recommended that we try a different cough medication.  We went to the drug store, picked up the prescription he gave us – and it was benzonatate in brand name form!

At that point we decided to make an appointment with our GP, despite the fact that we might have to wait a while to see her.  Debbie  called in, and it turned out that our regular GP was out on maternity leave (she just had a baby boy), and would be until January.  But ... there was a doctor covering for her, and we could get in on that very afternoon.  Awesome!  So off we went again, to see the new doc.  This fellow we both really liked.  In fact, Debbie's first comment upon leaving was that she wanted to switch GPs to him. :)  He listened, was full of questions and comments, and had a cracking good sense of humor.  We were most excellently entertained, and we left with a smile, a prescription for hydrocodone-based cough medication (the only one that's worked for her this year), and an inhaler that he thought might well help.  An hour later her coughing had stopped.  Last night she got her first good night's sleep in over a week.

In between trips to the doctor, I beavered away on my C program again.  Right at the moment I'm writing a replacement for the ancient getopt library.   I've got getopt working, so I really have no need to do this – but I'm offended by the unnecessary complexity of its API.  Further, writing a replacement looks like a tasty practice exercise to me.  So far it's turning out to be simpler and easier than I was anticipating, which really makes me wonder why it wasn't replace aeons ago...
Posted by Unknown at (permalink) 7:52 AM No comments: