Paradise ponders: a confluence of contractors...

Paradise ponders: a confluence of contractors...  So many things happening yesterday!  All good, too, though it meant that my day was basically one giant interruption.  :) 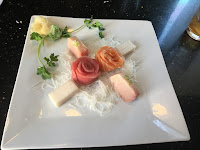 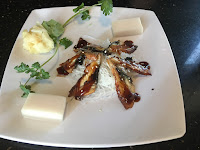 But first: on Monday Debbie and I both had a craving for sushi.  That meant an afternoon out at the Black Pearl, where we both had sashimi (along with our standard avocado egg roll as an appetizer).  The photo at far right was mine, with ahi, hamachi, sake, and white tuna.  Debbie's was in the near right photo, unagi and white tuna.  Yummy, they were!

Afterwards we went up to Aggie's Creamery for an ice cream cone, and this time Debbie walked in with me – first time in over a year she felt up to that!  She's making much progress, exercising hard nearly every day.  Her strength and endurance are steadily building, and her gait improves a little every day.  So nice to see this!

Our sprinkler contractor was here, with three people hard at work.  Until living through this myself, I had no idea how much destruction was involved in putting sprinklers in.  The three views below give you some idea, but I assure you that it's even worse than it looks!  The contractor brought the “clock” (the indoor, 24 station version of this) and I installed it in the cedar shed – the first irrigation component to go in there.  I also got to see one of the filters that will go in the shed soon – they're huge!  The contractors installed the filter temporarily outside, on the pressurized irrigation line, so that they could pressurize the line they're installing and use it to wet our (burned, dry) lawn down. 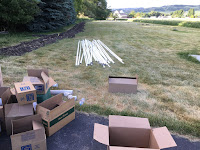 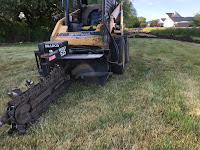 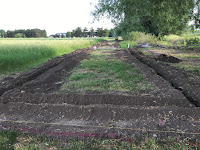 I got a most pleasant surprise in the afternoon: the plumbers who are going to install the pumps in our filling station arrived and started working.  The first step was to drain fuel out of the existing lines (I helped a bit with that) and then to disassemble all the fine work they did three weeks ago.  This morning they're supposed to be back to do the pump installation.  Hooray!

Then our electrical contractor contacted me yesterday to confirm that he will be here on Monday to wire up a subpanel in the cedar shed, and run an explosion-proof circuit out to the new fuel pumps.  Amazingly enough, the timing on all these inter-dependent jobs is going to work out just fine.  The only bad news there was that he insisted that I must be sitting down when he presents me with the cost (before he starts working) for the fuel pump circuit.  He's afraid I'm going to keel over when I find out what those parts cost.  Just to give me a heads-up, he told me that the junction box inside the filling station costs him about $200.  If you're not familiar with junction boxes, a typical one at Home Depot goes for about $3 (but that's not explosion-proof).  Yikes!

I got a phone call in the morning from a vendor in Logan who I'd contacted a couple weeks ago to find a source for western red cedar, 3/4" tongue-and-groove, that I'm planning to use for our deck's ceiling.  It was good news: he's found a source, and he's going to call me this morning for the pricing.  He's getting the raw wood, then milling the tongue-and-groove, so there's some work for him to do in order to get the price.  But I'm going to be able to get the wood.  That western red cedar is getting quite difficult to source, worse than redwood.  But this fellow found a Canadian source, at the quality level (small, tight knots) that I wanted.  Yay!

Finally, late in the afternoon a roofer referred to me by a contractor whose work I really like showed up to look at a repair job we have.  Our little second-floor balcony's floor is a disaster.  We just had it installed two years ago, and the contractor who did it really messed it up.  This fellow was all about doing it right.  He had lots of ideas, good ones, and was very straightforward about what things were done well and which were not.  He ended up poking around for about an hour, and will be calling me back today or tomorrow with an estimate on the materials.  He's working “off the books”, so I'll be paying for the materials up front and then for his time.  Ordinarily I wouldn't proceed this way, but he's got a stellar reference from someone I trust, and I was most impressed with his attitude, knowledge, and creativity.  Plus he could hardly be worse than the guy who did it before!

This afternoon my new router should show up, and then I'll be focused on getting my office back up and running, IT-wise.  I think I'll be installing the WiFi controller on my deck today, unless I get a whole bunch of interruptions. :)
Posted by Unknown at (permalink) 8:30 AM No comments: