Where did Native Americans come from?

Where did Native Americans come from?  Several places, including Australia!
Posted by Unknown at (permalink) 7:41 AM No comments:

Losing the thread...  Virginia Postrel on some technology we rarely think about or appreciate.  A very good read, as is so much else that she's written...
Posted by Unknown at (permalink) 7:39 AM No comments:

RIP, Lou Lenart...  We've lost another of the greatest generation, a hero to both the U.S. and Israel...
Posted by Unknown at (permalink) 7:38 AM No comments:

Morning in Paradise...  Miki, Race, and I took our usual morning walk, but just a bit later than usual – the sun burst over the mountains just as we started our walk.  The day is cloudless, so we had bright sunlight for our entire walk.

There wasn't any particular excitement along the walk, but lots of interesting and pleasant things.  White-faced ibis were flying in just about every direction.  I think they're searching for some wet ground, and there aren't very many sprinklers going nearby this morning.  One wheelie line we passed that was going had hordes of ibis under each sprinkler.  I think that field will have a depleted population of worms and grubs!  Barn swallows – dozens and dozens of them – were skimming the tops of alfalfa and barley, gobbling up any bugs that were stupid enough to leave the shelter of the plants.  In this way the swallows are helping the bugs evolve – any bug that likes to hide down low is likely to have more progeny, and eventually those will be the only bugs.  The swallows will then have to look elsewhere. 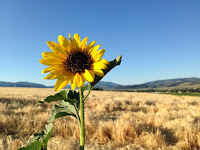 The sunflowers are out in force right now.  Along our walk there are perhaps 200 of these in bloom.  They'll continue to bloom all summer, and in the fall the stalks will die and dry out.  When that happens, they turn into seed-eating bird attractors.  Last year we had a bunch of these in our “garden” area, and in the late fall we had bazillions of finches all over them.  Their cheerful song was present for several weeks all day long.

Along the road we encountered a fat vole, sitting stupidly right in the middle, totally exposed.  The dogs, of course, immediately demanded a vole breakfast and set out to serve themselves.  The vole just sat there, blinking at us, with two dogs doing their very best to break the leashes or topple me (and they came pretty close to the latter!).  For a good 15 seconds or so, the dogs were right in that vole's face, lunging and snapping their jaws in the air 3 or 4 inches away.  The vole appeared to be completely unperturbed, and, worse from the dog's perspective, completely unintimidated.  They redoubled their efforts, but I finally managed to drag them back and safely around the vole.  On our way home it was gone, but I saw little tracks in the dust leading off to the alfalfa field beside the road.  Amazingly, the world's stupidest vole lived to see another day. 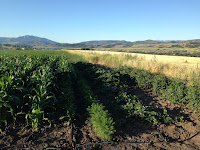 We stopped to admire the corner garden I've photographed before.  I know now that it belongs to Roger R., who lives about a half mile southeast of us.  It just keeps getting better and better.  Beets, carrots, squash, tomatoes, and corn – he's going to have a feast in a few weeks time! 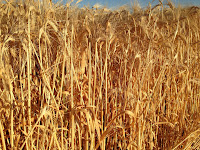 A little higher up, we walked alongside a barley field that is nearly all brown now.  The light breeze made the stalks and seed heads rustle in a most attractive way.  I could listen to that all day, much as I could listen to a burbling stream all day.  Just in the barley I took a photo of was a pair of quail.  I spotted them hunkered down and still, but the dogs did not.  Unlike the vole, they objected to our presence.  When I crossed some imaginary line, they simultaneously burst into flight, crossing about a foot in front of the two dogs.  Miki practically did a backwards somersault trying to get away from them, while Race did his best to pull my arm out of its socket.  I was laughing so hard at the two of them that I didn't feel any pain.

On the way back down, we spotted a tractor coming up the road toward us.  It was Mike C., a local farmer with a substantial dairy about 4 miles north of us, coming up to bale alfalfa on a field right at the end of our walk.  The tractor was towing a very modern Case baler, much like the one at right.  It's a sleek machine, and not all that big considering that it spits out gigantic rectangular bales that weigh about 2 tons each.  Mike was about to bale roughly 250 acres, and he figures it will take him 90 minutes.  Amazing machines.

Just before we got home, we passed our neighbor's pasture with (currently) four Paso Fino horses in the luxurious forage.  This morning one of the stallions decided to be indignant at our presence, and he led the four over to give us a piece of his mind.  In the last photo you can see the rather glorious barn these guys live in. 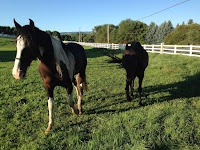 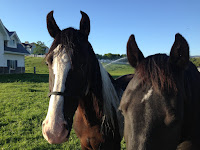 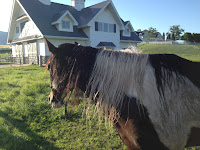 Yesterday the farrier was here, re-shoeing all these horses.  He works out in the same road we walk on.  That means there are hoof fragments all over the road from the farrier's trimming.  Miki and Race completely lose their minds in the presence of these clippings.  There is no dog treat we've ever tried that attracts them the same way these clippings do – they're like chocolate-covered cocaine for dogs.  After each farrier's visit, I have to short-leash these two and march them through the edge of the alfalfa field to avoid the clippings, else I'll have a big fight on my hands.  This morning I forgot, and I spent five minutes getting those two dogs to move 25 feet.  You wouldn't think that two dogs that together weigh half what I do could keep me from moving – but when they try really hard, they can do it.  Horse hoof clippings motivate them to do this :) 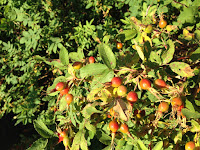 As we passed over our irrigation canal bridge, I noticed that the rose hips are just starting to turn red.  Yesterday there wasn't a hint of red on them.  Look at them now!  In a week or so, they'll be a beautiful cherry red.  We've got wild roses all over the property.  The biggest, lushest bunch is right at our bridge, but all along the canal and in our back yard we must have 100 more clumps of them.

I love these morning walks, even when they're unexciting...
Posted by Unknown at (permalink) 7:31 AM No comments: