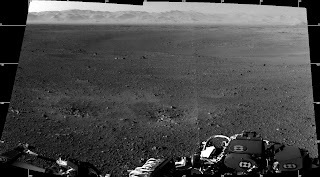 All the news from Curiosity is good.  The mast is up, and the photo at right ( a composite of two) was taken with one of the mast's cameras.  All the checkout and shakedown work so far shows no problems at all.

Curiosity is tweeting, by the way...
Posted by Unknown at (permalink) 5:24 AM 1 comment:

Suppose you were badly in need of some money.  Let's say you needed $10,000 to buy something you desperately wanted.  You might be willing to pay a somewhat higher-than-usual interest rate to get a loan of that much money, and you'd realize that you'd be paying back more than you borrowed.  So, for example, if you borrowed that money for 10 years at 20% interest with a balloon payment, you'd be unsurprised that you'd end up paying back about $30,000.  That's a lot, but hey – that was something you really wanted.

But now suppose you were told you'd have to pay back $100,000?  Wouldn't that make you wonder whether it was worth it?  Well, apparently such considerations – especially since the taxpayers would be footing the bill – never even occurred to school district officials at Poway (in San Diego County).  And the Poway officials were not alone.

An anonymous commenter yesterday asked if I would “be willing to divulge the location of Japatul Lane”.  Well, certainly!  But it's no secret – even Google Maps knows where it is. The flat-bottomed valley just to the east (right) of the two ponds is where we reliably spot the deer:


View Larger Map
Posted by Unknown at (permalink) 4:32 AM 2 comments: