I will not register my weapons should this bill be passed, as I do not believe it is the government's right to know what I own. Nor do I think it prudent to tell you what I own so that it may be taken from me by a group of people who enjoy armed protection yet decry me having the same a crime. You ma'am have overstepped a line that is not your domain. I am a Marine Corps Veteran of 8 years, and I will not have some woman who proclaims the evil of an inanimate object, yet carries one, tell me I may not have one.

I will not be disarmed to suit the fear that has been established by the media and your misinformation campaign against the American public.

We, the people, deserve better than you.

And yes, we most certainly do deserve better...
Posted by Unknown at (permalink) 7:14 AM No comments:

Curiosity: Checking Out the Neighborhood... 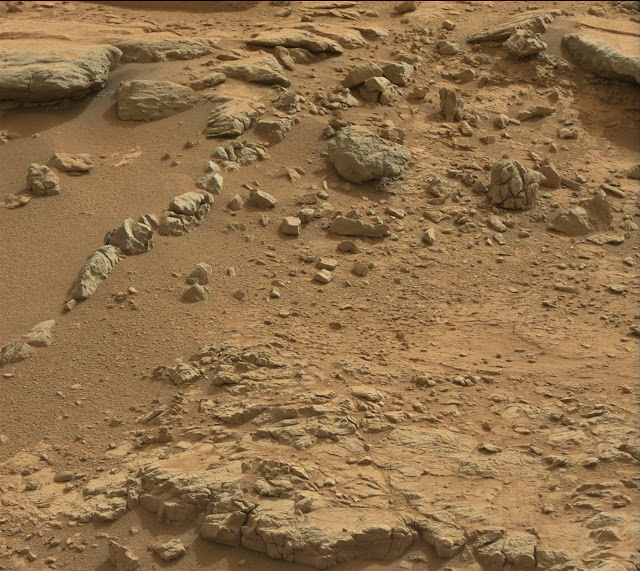 Helene is one of the tiny moons of Saturn.  In 2011, Cassini made a close fly-by of Helene, and two of the images are here combined in an anaglyph to give a beautiful stereo view of the tiny satellite.  Put on your blue/red glasses and have a look-see!  Via APOD, of course... 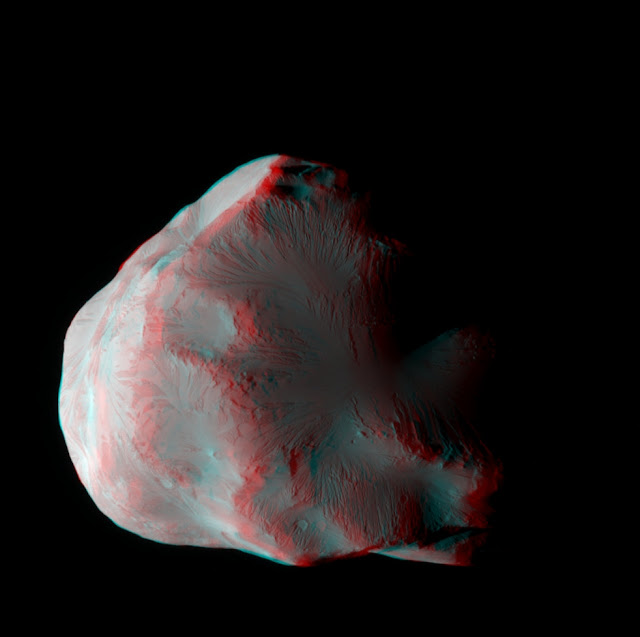 Posted by Unknown at (permalink) 7:03 AM No comments:

Nice little article about what we can expect this year...
Posted by Unknown at (permalink) 6:58 AM No comments:

Many older ciphers (and some less sophisticated current ciphers) are based on letter substitution (instead of “a”, write “m”, instead of “b”, write “j”, and so on).  A basic tool for cryptanalysts trying to break such a cipher is tables of “letter frequencies”.  These tables show how often each letter appears in ordinary writing for any particular language.  Even more importantly, the tables will include how often each “digram” (pair of letters) and “trigram” (triplets of letters) appears.  With these tables and a little additional cleverness for polyalphabetic substitution ciphers, all you need is enough encrypted messages and you can break the code.

Letter frequency tables have been readily available for a long time.  I remember first seeing them in the 1970s (when I was studying cryptography in the U.S. Navy), and the tables I saw then were quite old – WWII-era.  The English letter frequency tables most often used today were generated by a fellow named Mark Mayzner in the early 1960s.  He analyzed (the hard way!) some 20,000 English words to generate his tables.

It turns out that Mr. Mayzner is still alive, and just last month he wrote Peter Norvig to ask if he might update those tables using today's much easier methods and vastly larger accessible texts.  Peter did exactly that, and the results are here – and freely downloadable!
Posted by Unknown at (permalink) 6:57 AM No comments: 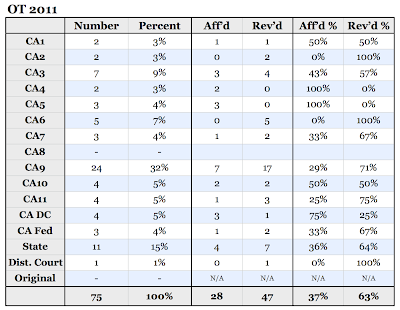 This was certainly unexpected: the Ninth Circuit court has overturned the 2003 District Court ruling that San Diego had violated the constitution (both state and federal) by leasing land in Balboa Park to the Boy Scouts of America.  I say “unexpected” because the Ninth Circuit is by far the most liberal of the Circuit courts, and routinely issues opinions that (a) comport with progressive viewpoints, and (b) get reviewed and overturned by the Supreme Court (chart at right courtesy of the invaluable SCOTUSBlog's 2011 “stat pack”).  Out of the blue, contrary to their usual progressive position support, nearly 10 years after the original ruling, the Ninth Circuit reverses this.  A nice gift for the Boy Scouts!
Posted by Unknown at (permalink) 6:40 AM No comments:

Gary Becker and Kevin Murphy are noted economists, both professors at the University of Chicago and both fellows at the Hoover Institution.  In addition, Mr. Becker is the 1992 Nobel Economics prize winner.  In other words, they are both mainstream economists – not fringe lunatics like me.

They argue persuasively for an end to the war on drugs, and for legalization (whether limited or complete) of currently illicit drugs ($WSJ).  Their arguments are the mostly same as mine: the war on drugs hasn't worked at its primary purpose (lowering the rate of use of potentially dangerous drugs), it's enabled a huge criminal enterprise, and the cost (measured any way you'd like, including dollars and the criminalization of private choices) is outrageous.  The only argument of mine that they left out is the moral argument: that government has no right to prevent me from freely choosing to use drugs, so long as in doing so I don't harm anyone else.

Most of those arguing for decriminalization of drugs, unlike me, are primarily motivated by their desire to use these drugs without risking their liberty.  Our politicians know that this group, treated as a demographic, has little impact at the polls and doesn't significantly contribute to political campaigns.  Therefore they get little attention compared with the rest of Americans, who still support the war on drugs by large (though declining) majorities.  So I'm not anticipating change anytime soon, and perhaps not within my own lifetime.  Still, it's nice to see my own position laid out so nicely by mainstream thinkers in a mainstream publication...
Posted by Unknown at (permalink) 6:13 AM No comments:

The irreplaceable Mark Steyn on the fiscal cliff “deal” – ridiculous, unseemly, repulsive, and wicked.  Yup, that about sums it up.  An excerpt:


Around the world, the only interest of friends and enemies alike in this third-rate Beltway hokum is (to return to the theme of my book) the question of whether America is capable of serious course correction – and, from debt ceiling to supercommittee to fiscal cliff and now back to debt ceiling, the political class keeps sending back the answer: No, we're not. For a good example of how Washington drives even the greatest minds round the bend, consider Charles Krauthammer's analysis on Fox News the other night:

"I would actually commend Boehner and Paul Ryan, who in the end voted 'yes' for a bad deal. But they had to do it."

If courage is the willingness to take a stand and vote for a bad deal because you've been painted into a corner and want Obama to fly back to Hawaii at the cost of another $3 million in public funds that could have gone to algae subsidies so he'll stop tormenting you for a week or two, then truly we are led by giants.

If you think politics is a make-work project for the otherwise unemployable, then the system worked just fine. And I don't mean only the numbers:

On Monday, 300 million Americans did not know what their tax rates would be on Tuesday. That's ridiculous.

Then, Senate Minority Leader Mitch McConnell spent the night alone in a room with Joe Biden (which admittedly few of us would have the stomach for). And when they emerged they informed those 300 million Americans what their tax rates now were. That's unseemly.

Then, in the small hours of the morning, the legislature rubber-stamped it. That's repulsive.

There's a term for societies where power-brokers stitch up the people's business in back rooms and their pseudo-parliaments sign off on it at 3 a.m., and it isn't a "republic of limited government by citizen-representatives."

There are arguments to be made in favor of small government: My comrades and I have done our best over the years, with results that, alas, in November were plain to see. There are arguments to be made in favor of big government: The Scandinavians make them rather well. But there is absolutely nothing to be said for what is now the standard operating procedure of the Brokest Nation in History: a government that spends without limit and makes no good-faith effort even to attempt to balance the books. That's profoundly wicked. At a minimum, the opposition, to use a quaint term, should keep the people's business out in the sunlight and not holed up in a seedy motel room with Joe Biden all night.

But you'll definitely want to read the whole thing...
Posted by Unknown at (permalink) 5:55 AM No comments: