More memories ... from my mom's photo collection.  The photos in this post are all modern copies of older photos.  I do not have the originals.

Here my mom is holding her little sister (my aunt) Bonnie on her shoulders.  On the back, in mom's handwriting: “Bonnie + Elinor 50-51”.  I recognize the front yard as my maternal grandparent's home, the one I knew as a little boy.  This was roughly a year before she married my dad.  How young she looks!  At that point my dad was 27 years old, returned from the war and starting his own business – quite an age and experience difference.

This was taken in the living room of my maternal grandparent's house.  On the back, in my mom's handwriting: “Christmas 53-4?”.  I'm remembering it from a few years later, I'm sure.  I remember that wallpaper, though – thought it was terribly ugly even then! :)  Left-to-right in the photo are my mom's dad (my grandfather) Donald, her sisters Bonnie and Betty (my aunts), Betty's son Mike (my cousin), and my mom's mom (my grandmother) Mable.  I've discovered that my grandmother's name is spelled “Mable” on her birth certificate, and “Mabel” in many other places (including some official documents).  Even my mom spelled it differently at different times.  I'm going with the birth certificate as authoritative, but for all I know that was the typo!

This bevy of bathing beauties all looked like strangers to me, but on the back in my mom's handwriting it says: “Mom – top right”.  The bathing suits were the height of fashion in the '20s.  I don't know my maternal grandmother's birth year, but it must have been in the first few years of the 1900s – which would make her 20 years old around 1925, so that actually fits the scenario.  That means this photo was taken sometime around then, which makes it (so far, at least) the oldest photo of my mom's family that I've found.

Finally, there's this photo of (left-to-right) my mom, my maternal grandfather Donald, and my uncle Donnie.  On the back, in my mom's handwriting: “Dad Don & Elinor”.  I don't recognize the house, but from the city-style mailbox it must be their Locust, New Jersey home – I know from mom's stories that it was actually in the city, unlike their later homes.  Mom looks to be 3 or 4, which would place this in '38 or '39.  My grandfather certainly looks very young there!
Posted by Unknown at (permalink) 7:09 AM No comments:

My hands look like a war zone, and I really don't know why.  I have one large, deep blue bruise under my right thumbnail.  There are two places where my skin has cracked in a crease.  There are two other places where a piece of skin has been pulled off somehow (those hurt!).  Then there are three or more scrapes and punctures of various types.  The weird thing is that I have no idea how I managed to get any of these wounds!

I've started walking every day with the puppies, between two and three miles on each walk, with (usually) 700' of elevation change in the walk.  With our current cool weather, these walks are very pleasant affairs – it's usually in the 50s, with clear blue skies and a light breeze.  There are sunflowers everywhere.  Barley and oat fields have all turned a golden brown.  Alfalfa fields are mostly about ready for the year's third cutting; many of them are being irrigated right now.  The air is crisp and clean-smelling, full of farming's botanical perfumes (the field north of our home was just baled, and smells wonderfully of mown hay).  The foothills to our east are getting tinged with fall color, less than 1,000' above us – it's looking like an early fall here on the valley floor, possibly as early as the end of September.  Yesterday we saw a pair of Sandhill cranes browsing in a oat field that had recently been cut for straw.  They're actually visible near the center of the first photo below, if you embiggen it enough.  Some photos from the last couple of walks: 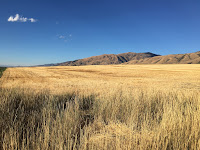 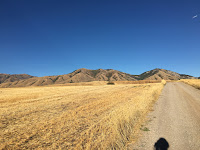 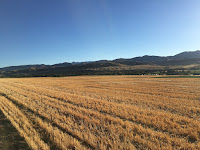 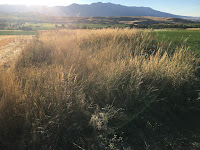 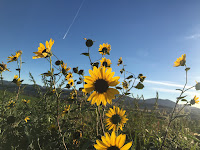 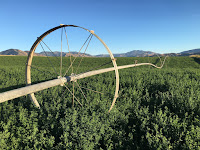 Despite many other things competing for my time, I was able to get a bit of work done on the electrical wiring for our sun room.  The job I thought was going to be easy has (of course!) gotten a bit more complicated.  It turns out that the end wall (of our house) that I'm trying to get the wiring into wasn't made with single studs that are two stories high, as I expected.  Instead the first story was framed exactly like a one-story house, then a second story was built right on top of it.  That means I can't just slip wires down in the void between two studs.  Instead, I have to drill through the upper plate on the first story, the lower plate on the second story, and the sub-floor on the second story – and then thread the wiring through all three of those holes.  Oh, such fun that will be!  I have to do this in two places, too.

This morning on the dog's first outing, around 5 am, I had a beautiful encounter with a big barn owl.  It's really eerie how silently they fly!  I was sitting on a lawn chair in a spot that was shaded from our rear porch lights, but the owl, flying about 10' over our heads, was fully lit up.  It circled us, slowly, about three times – as if trying to make up it's mind about whether a dog would be good prey.  It finally gave up and flew up and over our house to the south.  But for 30 seconds or so I had a spectacular view of it.  The dogs, of course, never saw a thing...
Posted by Unknown at (permalink) 5:59 AM 1 comment: