The main Curiosity site has a bunch of new photos up, including all those below showing the various bits of hardware strewn about the Martian landscape by Curiosity's landing.  All of these bits and pieces are within a few kilometers of each other.  MRO took these photos from its orbit around Mars, proving that the scientists know exactly where Curiosity has landed.  This is in stark contrast to past lunar and planetary missions, wherein it took weeks or even years to figure out the precise landing spot.  This is a testament to the skill of the folks operating these missions and to the capabilities of the hardware we have flying around Mars. 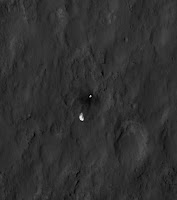 Pure geek stuff, on Bresenham's algorithm for rasterizing curves...
Posted by Unknown at (permalink) 5:50 AM No comments:

The farm I spent my childhood on grew holly trees (mainly Americal Holly, Ilex opaca) through the 1960s.  I got very familiar with this tree, especially the horticultural varieties that my father favored.  My dad told us kids that the American Indians used a tea made from holly leaves during their feasts.  They'd eat until they could eat no more, then drink a cup of this tea.  The tea was an emetic, so they'd go off in the bushes and puke – and then come back to eat their fill again.