Most of you are likely familiar with Redbox, a video rental service that operates out of an iconic red vending machine.  I was not familiar with them (the last time I rented a video, it was on Betamax tape :), so I had to do a little research when reader Celeste S. emailed me the photo below, just to figure out what the heck she was showing me!

Celeste apparently happened by a Redbox that was opened (for servicing, I presume), and she snapped this photo.  The vertical cylindrical unit is basically a big storage carousel that can spin around under the control of a computer.  Each of the seven levels appears to hold about 60 DVDs, so the total capacity is around 420 DVDs.  The “picker” on the right just moves up and down, between levels.  The Redbox's computer can load or unload any slot by moving the picker to the right level and spinning the cylinder around to put the right slot in front of the picker.

Celeste took the picture so she could show her (homeschooled!) kids how a Redbox actually works.  There are quite a few explanations available on the web, I discovered – along with some incorrect information and some speculation that dwarf trolls live inside of every Redbox :) 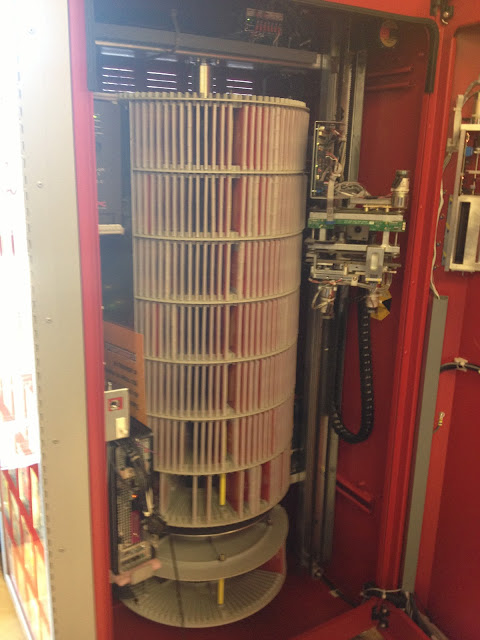 When I first saw Celeste's photo, it reminded me of machines I worked with almost twenty years ago: robotic tape libraries.  These were quite popular at big companies in the '90s (and still around today, though less common).  Some of the tape libraries could hold thousands of tapes; others just a few dozen.  The cylindrical design – very much like the Redbox machine – was very common for the smaller tape libraries.  That design allows a simple mechanism to get at a reasonably large number of tapes (the tapes, by the way, were considerably larger than a DVD!).  Larger tape libraries tended to use a linear design, reminiscent of large libraries; they could generally be extended to be as large as you'd like them to be...
Posted by Unknown at (permalink) 9:44 AM 1 comment:

Here's a wonderful post talking about the process of writing code that decoded floppy disk data read in realtime, on a 6502 processor.  Readers who are geekly and of a certain age will identify with this.  Younger folks will probably just shake their heads at the lameness of their elders :)

What struck me about this post was the way the author brings back the challenges of programming on those old, slow microprocessors – and the way we engineers glommed onto tricks like the “illegal” op codes (almost every microprocessor had them).  I never wrote any code that decoded floppy data, but I did many other similarly challenging things.  A couple that spring to mind: variable-slew stepper motor control (to speed up and quieten floppy disk positioners) and realtime FSK radioteletype decoding, with multipath and single-side dropout handling.  Both of these would be trivial today; your average smartphone could do it in a high-level language.  But back then, the microprocessors could only do things like that if you pulled out every trick in the book, and perhaps invented a new trick or two along the way...
Posted by Unknown at (permalink) 9:23 AM No comments:

If you were a sentient being on July 20, 1969, then almost certainly you spent that evening and night glued to a television set, watching and listening as Apollo 11 landed on the moon, and as Armstrong and Aldrin took that first, too-short “moon walk”.  That was me – in the basement of my Uncle Donald's house, watching a little black-and-white screen for 10 hours or so straight.

I was the only one in that household interested enough to watch; my Aunt Marion was completely disinterested, my cousin Jonathan too busy chasing willing maidens, and my Uncle Donald (who was generally interested in science) was dismissive for reasons I never understood.  But I was eagerly vacuuming up every scrap of information I could get my hands on.  That information was quite limited back then – there was no Internet, of course.  Printed publications were always days to years behind, absolutely useless for this purpose.  The only media that could provide near-realtime images and sound was television – so, like hundreds of millions of others, I sat in front of the magic box.

The voice network called “CAPCOM” was available for the public; it was running (foreground or background) during all the contemporaneous coverage.  Some other voice networks were occasionally patched in, but they were full of acronyms that nobody bothered explaining, so while they sounded cool they didn't really help elucidate what was going on.  The science and technology reporters had a really tough job – they were trying to explain some pretty complicated things in a way that “Joe Everyman” would understand.  I was frequently frustrated by their failure to talk about more interested and more complex aspects.  But...this coverage was as good as it got, back then.

Now someone has put together an awesome web site that shows how one might experience Apollo 11 if it occurred today.  I watched, enthralled, as the entire descent phase of Apollo 11 played out before my eyes.  CAPCOM was on, along with the Flight Director's net.  Transcripts for both play live.  Video from the sequence camera is on screen.  All of this is synchronized, and you can jump around any way you'd like.

For me, watching this was almost like traveling back in time.  I was back in my uncle's basement, watching on the little black-and-white screen – and fully immersed in the excitement and anticipation of the moment.  I didn't have a heart monitor going, but I'm certain my pulse and blood pressure were elevated.

Highly recommended!
Posted by Unknown at (permalink) 9:15 AM 2 comments:

Interesting new web-based photo sharing site: Everpix.  $49/year to host any number of photos.  Well, maybe not quite unlimited – there are some weasel-words there to the effect that Everpix can shut down anyone with “excessive” use, whatever that means...
Posted by Unknown at (permalink) 9:00 AM No comments: