Paradise ponders...  It rained intermittently yesterday, so the boys (Miki and Race) and I missed our walk.  This morning it's a little nasty out (humid and cold), so we're going to wait until later this morning, or maybe even early this afternoon.

Debbie and I took a ride in the Hardware Ranch area late yesterday afternoon.  We had some great viewing of several kingfishers under the shadow-less light of a cloudy day.  It's interesting what the lighting does to your view.  Through the binoculars the colors were dull and flat by comparison to bright sunlight, but we could see the details of the birds much better in the lower contrast.  We also caught a fleeting glimpse of a dipper, and Debbie spotted just one deer as it hightailed it over a hill.  Hunting season is open, and the deer are smart enough to stay out of sight when the hills are swarming with orange-jacketed hunters.

Elray (the well driller) showed up in the afternoon to start our well, and I went out to observe and chat a bit.  Elray is quite a character – a lifetime resident of the general area, as were his parents.  His dad was also a well driller.  Elray told me about a fun project he's got going – to restore his dad's first well drilling rig to working condition.  It's made mostly of wood, which has deteriorated over the years, so he's got a bunch wood working to do.  That's all new to him, as everything he does involves steel.  That old rig also works completely differently than today's rigs.  It didn't use a rotary drill bit; instead, it used a round “bit” that got pounded into the ground with a heavy weight that was repeatedly dropped on the top of the pipe.  This is essentially the same idea as a modern pile driver, but with the weight lifted via a cable instead of a diesel piston.

The first photo below shows the rig while drilling.  Note the American flag flying at the top.  What you're seeing there is the drill shaft turning (which turns the bit far underground against the hole's bottom), and compressed air (at up to 900 cfm!) blowing the debris right up the hole and out of the top, in the form of gray mud mixed with gravel that you can see at the bottom of the rig.  The mud is gray because he's drilling through a layer of clay that underlies the entire valley.  The second photo is the same, except with a closer view of the operator's panel and the top of the hole.  The third photo shows Elray using the hoist mechanism to add another 40' length of drill shaft.  He's doing this because the first 40' piece is now almost entirely underground, so he has to add another segment to go deeper.  The last photo shows a later stage of that same operation. 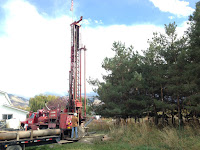 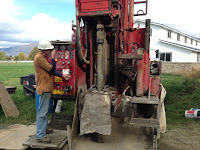 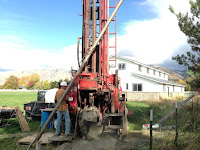 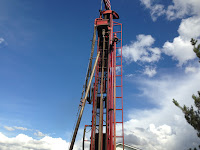 I was fascinated by Elray and his rig.  Watching him work through an entire cycle of drilling and adding a “stick” to the drill shaft, I could see just how cleverly this entire system worked together with a skilled operator.  The end result is that a single man, nearly 70 years old, can drill a well up to 1,200' feet deep.  The rig is full of things that surely were developed after years of in-the-field experience and innovation.  To pick on just one example: the system that allows “sticks” to be screwed and unscrewed from one another without requiring the precise alignment of (say) pipe threads.  That system is simple, relying mainly on tapered threads (sort of like an “easy-out”, if you're familiar with them), but incredibly robust and easy for the field workers to use.  Another: the center-of-gravity hoist mechanism (which you can see in the last two photos) makes it easy to maneuver the 400 lb. “stick” into the proper position.  There are probably two or three hundred such bits of cleverness in this rig's design.

When I mentioned to Elray how impressed I was with the rig's engineering, he launched into an apologia of sorts.  I had to stop him to ask why he was doing this – and it emerged that the rig I was so impressed with is, by today's standards, obsolete.  It's as if someone started praising the cleverness of vacuum tubes to someone like me.  The modern rigs, Elray tells me, make this one look sort of silly.  They're full of computers that monitor the entire operation and automate much of it.  But those modern rigs are extremely expensive (as in well over a million dollars), and with his small business he can't justify that sort of expense unless he raised his fees beyond what the local market would bear.  He actually had a relatively sophisticated analysis of the business case, though expressed in the language of a country boy.  So he's making do with his two old, obsolete rigs.  The cost of maintaining them in working order is a small fraction of the cost of a modern rig's financing, and that allows him to keep his fees low.  About the only regret he seems to have is missing the increased safety of the modern rigs.
Posted by Unknown at (permalink) 7:17 AM 3 comments: