Good news in Paradise!  Debbie had another followup exam this morning, and ... the doctor cleared her for full weight bearing on her knee – whatever she can tolerate.  She's now got a shoe on both feet, and is starting to walk around kinda-sorta like a normal human :)  I've told her I expect her to be doing jumping jacks by the time I get home from my trip next week.  Woo hoo!
Posted by Unknown at (permalink) 11:16 AM No comments:

What's the purpose of an education?

What's the purpose of an education?  Several of my neighbors – each with lots of kids :) – have a passionate interest in education.  Of course, their interest is primarily on behalf of their kids.  Since this is also a topic I'm interested in, this has led to quite a few interesting conversations.

Speaking with one mom, it dawned on me partway through our conversation that she had a big question about what the purpose of an education actually was.  She graduated from a liberal arts institution, where the idea was pounded into her that the only important purpose of an education was to prepare her to think on her own, and to learn on her own.  But now, as a mom, she wished something else for her kids: the education she didn't get, one that would have prepared her to contribute in a meaningful way to human society.  She's open about what that contribution might be – it could be a productive job, but it also could be some charitable venture or even a religious vocation.  But she's torn about her own feelings, as they conflict with what she was taught was right and proper.

I was just stunned to see a mom feeling guilty about wanting her kids to get an education that directly prepared them to make a living.

The idea of a “liberal education” (which is not the same as being politically liberal!) made a lot more sense before the early 20th century, when the vast majority of ways to earn money really didn't require much more than a functioning brain and sufficient brawn (depending on the nature of the job).  Almost any job could be reasonably learned through a bit of on-the-job training, by almost anyone.  Even today we have many such jobs.  However, for the past hundred years or so an increasing proportion of jobs require a significant amount of knowledge to perform them.  For instance, one cannot reasonably start designing aircraft (at least, not any that I would want to fly in!) after a few months of on-the-job training.  There are simply too many things one has to know before you can do that.  The same thing is true of many other jobs, and that is increasingly the case.  My agonizing neighbor hasn't really internalized that change, and the need for an education to directly prepare the student to perform well in their chosen field.  I think she has also not internalized the fact that simply training one's mind is insufficient.  When I was hiring software and hardware engineers, I would never have considered an applicant who had excelled in a liberal arts school, but had zero education or experience in software or hardware engineering.  Wouldn't have happened.

I wonder how prevalent my neighbor's angst is?  How much does that drive our educational institutions?
Posted by Unknown at (permalink) 6:26 AM No comments:

Thirty-eight...  That's how many Republicans – so far – have declared their candidacy for the 2016 Presidential race.  Democrats?  A measly seventeen.  Third-party candidates?  Just twenty-eight.  That's eighty-three candidates in all (and nary a normal human amongst them).  Is that a record number?  Jeez, I sure hope so...
Posted by Unknown at (permalink) 5:44 AM No comments:


“Every normal man must be tempted, at times, to spit upon his hands, hoist the black flag, and begin slitting throats.”

But ... what if you are tempted at all times?
Posted by Unknown at (permalink) 5:07 AM No comments: 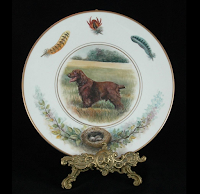 Field spaniel painting ... on a “cabinet plate”.  I'd never heard the term before, but apparently it just means a plate intended for display, rather than for actual use.

If you're a regular reader of this blog, then you know that we have two field spaniels (Miki and Mo'i), and had another (Lea) in the past.  We'll likely have more in the future.  We've grown very fond of this breed over the past couple of decades.  For the past ten years or so, we've collected some nice pieces of art that features field spaniels: a few original pieces, but mostly prints and one bronze sculpture.  Today we were lucky enough to win an auction (in England) for the plate at right, which will make a very nice addition to our little field spaniel-themed art collection.

Now we just have to hope it gets here in one piece!
Posted by Unknown at (permalink) 4:58 AM No comments:

“…a Munich-like arrogance...” Victor Davis Hansen on the Iran deal.  His conclusion:


We are seeing this predictable caricature as well, as the Obama administration keeps insisting that there was no alternative to the deal other than either an apocalyptic nuclear Iran or yet another ill-starred Western preemptive attack in the Middle East — even as sanctions had crippled the Iranian economy to the point that the theocracy in extremis limped to the negotiation table seeking relief.

Today we see a Munich-like arrogance that men of assumed reason and sobriety, by their winning charisma, rare mellifluence, or superior wisdom, can convince Khamenei of the errors of his ways. Western humanists habitually preen that they can demonstrate to authoritarians why their bellicosity is supposedly against their own self interests — as if autocratic aggressors envision risking war, and shorting their own people, as unimaginable evils in comparison with the acquisition of honor, glory and respect that follows from easily bullying neighbors and successfully gobbling up real estate. John Kerry believes that the bomb is not in Iran’s real interest; Iran believes that so far even the idea of a bomb most certainly has proved very much in Iran’s interest.

As the democracies negotiated away Czechoslovakia to Hitler at Munich, the Japanese and Italians had earlier offered the world clear instruction about the wages of appeasement. Their serial aggressions in China and East Africa throughout the late 1930s had sated neither dictatorship, but rather convinced both that there were lots of weak countries that could be safely harvested without incurring a larger war with the West.

While John Kerry ignored the long-term security of Israel and the Sunni states in the Middle East, Vladimir Putin had earlier demonstrated that Ossetia led to the Crimea that led to Eastern Ukraine that may well soon lead to the Baltic states. Failed reset no more wised up John Kerry than Abyssinia or Manchuria had enlightened Neville Chamberlain. Munich’s 1938 hype led to catastrophe in 1939, in a way that the current 2015 self-congratulation may well become frightening in 2016.

The Iran deal is not Munich, but the same naiveté, vanity, and foolishness of Western leaders is close enough to warn us about what happens next. And it will not be good.

Read the whole thing...
Posted by Unknown at (permalink) 4:37 AM No comments:

The Far West...  I've no idea how valid this “cultural map” is, and I'm automatically skeptical of such broad generalizations.  But ... I can't help but like the fact that we moved to almost the perfect geographic center of a region whose culture suits us almost perfectly.

Now if only that region was growing, not shrinking.  Oh, well, at least the borders are far enough from us that we might hang onto this culture for our lifetime...

Posted by Unknown at (permalink) 3:56 AM No comments:

It's not a terrifically good simulation, but it does manage to give you a sense for the mechanical peculiarities of typewriters.  I particularly like the way the simulator works better if your keystrokes are evenly spaced – that's exactly how those old manual typewriters worked...
Posted by Unknown at (permalink) 3:46 AM No comments:

Eternal peace...  Via my pistol-packing mama, who just found out about the subject of this short video.

While I was in the Navy, in the '70s, there were several ceremonies at the facilities I served in, honoring veterans of WWII and the Korean War who had died.  In one of those, the ashes of one veteran were scattered on the approach to the runway at Coronado Naval Air Station, in accordance with his wishes.  He was the only survivor on a plane that crashed on landing there during WWII, and his ashes were scattered on the very site of that crash.  After recovering from his injuries, he went on to serve all over the Pacific theater.  I don't remember much about the ceremony, but I do remember being surprised that it was happening, and at the pomp and solemnity of it.  I just happened to be walking along the beach nearby when it was taking place, and watched from a small dune nearby.  The aviator's daughter spoke about him for a few minutes, which is the only way I knew of him...
Posted by Unknown at (permalink) 3:23 AM No comments: 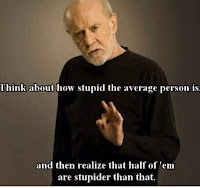 Wisdumb...  Via reader Simi L.
Posted by Unknown at (permalink) 3:11 AM No comments:

Proton arc over Lake Superior...   What a gorgeous photo!  Via APOD, of course...
Posted by Unknown at (permalink) 2:48 AM No comments:

Climate change alarmism...  This sort of thing is in the media all the time, but this particular one caught my eye.  The writer is trying to scare the public into thinking that climate change is threatening future supplies of coffee.  Oh, noz!  My morning cup is doomed?  Better support [insert wealth redistribution scheme] to fight climate change!

The wonderful thing about the mainstream media (the BBC in this case) is that they see no need to base their assertions on that pesky old reality, and especially not on anything as boring as “facts”.  Even the most cursory investigation would have shown them that worldwide coffee production has been increasing quite steadily for over 500 years, including in recent years when you'd think they'd be negatively affected by climate change.

Their “concern” is entirely made up.  It's bullshit with a veneer of self-righteousness, coolness, and sophistication.

But it's still bullshit.
Posted by Unknown at (permalink) 2:46 AM No comments:

Peace = pacifism?  That certainly seems to be the belief of a great many people, of just about every political perspective.  To be labeled a “hawk” is the same, to many people, as being labeled a warmonger.  This article is a great example of that notion: condemning Stephen Hadley, the head of the Institute of Peace, for believing that peace in the Ukraine will come only after the West intervenes militarily (he advocates supplying the Ukrainians with heavy weapons).

This ignores the fact that virtually all conflict at the nation level, throughout all of human history, has been resolved not through diplomacy but through the “hawkish” exertion of military force.  If there was any lesson one could take away from a reading of history, it would be that Stephen Hadley is right: negotiating with Putin is futile, and sending some Russian soldiers home in body bags is what it will take to bring peace to the Ukraine.

For this piece of common sense he is roundly condemned by U.S. progressives, libertarians, and even some conservatives.

When I read things like this, I always wonder how the proponents of diplomacy maintain their optimism, given diplomacy's dismal record of conflict resolution.  I forget who said this (maybe Patton?) and I forget the exact words, but there's a wonderful quote that goes something like this:


Diplomacy is generally useless, except when negotiating an enemy's terms of surrender.

That's the only kind of diplomacy Putin is likely to pay attention to...
Posted by Unknown at (permalink) 2:31 AM No comments: