I feel sorry for (almost) all of you...  Why?  First because you missed Debbie's chicken-mushroom soup.  We ate it all; finished it off yesterday afternoon.  It was so good!  Then because you're going to miss Debbie's baked Ora King salmon this afternoon (except for my brother Scott, who's joining us for dinner).  Much deliciousness around here!
Posted by Unknown at (permalink) 9:24 AM No comments: 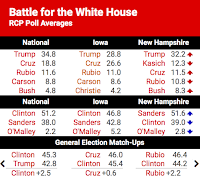 I read articles ... like this one, and I wonder: does anyone believe a word she says?  That article is from NPR, and you'll note how carefully it avoids any judgment – or push-back, or statements of alternative views, etc.  If this (and other outlets just as carefully pro-Democrat) was your only source of news, you might be forgiven for siding with The Hillary.  But are their any prospective voters like that?  The chart at right (from RealClearPolitics this morning) says ... yes, there are.

That's quite amazing to me.  And depressing.  Though if you're a Democrat and you think your only alternative it The Bernie...
Posted by Unknown at (permalink) 3:30 AM No comments:

Those burrowing humans!  This is the first I've heard of a proposed project (lots more here) to build a 92 kilometer (about 55 mile) long tunnel under the Baltic Sea between Helsinki, Finland and Tallinn, Estonia.  The estimated costs are up to 13 billion Euros.  Politicians nearly always underestimate such costs, so likely it would be more like 20 to 30 billion Euros (or $18 to $27 billion at today's exchange rates).

I suspect the benefits for such a tunnel would be primarily for the Finns, who by virtue of their geography are relatively isolated from the rest of Europe.  That tunnel would give them direct access to all of Europe by rail, which is much less expensive than air travel.  Of course, it would also do the reverse: give all of Europe direct rail access to Finland.  One likely consequence of that I personally find unfortunate: there will be many more people traveling to the relatively isolated (and very beautiful) hinterlands of Finland...
Posted by Unknown at (permalink) 3:18 AM No comments:

Some very unsettled science...  Our understanding of human history has been constantly changing throughout my entire life (and of course, before that as well).  This, despite the very confident and (dare I say?) settled tone of all the texts and science books on the subject I've read, up until about 20 years ago.  At that point the relevant science communities seemed to collectively decide they were better off not claiming that they actually knew anything – instead, they've been concentrating on finding actual evidence (like the mammoth in this story).

Why did that science community take the humbler approach, and the climatologists their fervently preachy approach?  The answer seems obvious: money.  There's no grant money riding on any particular answer from archaeology and anthropology.  Climatologists, on the other hand, know their grant money derives from fear of global warming.  It's conspicuously true that the (relatively few) dissenting voices in that community are almost entirely immune to this grant money influence, because of tenure, impending retirement, independent resources, etc.
Posted by Unknown at (permalink) 2:51 AM No comments: