As long-time blog readers know, I have visited little Estonia many times.  When I first visited in 1992, it was an economic wreck – only in its first year as an ex-Soviet satellite nation, and struggling with basic concepts of capitalism.  Over the years that I visited there (last time in 2004), the country adopted an enlightened tax policy, established the firm rule of law, and enacted legislation that created a very business-friendly environment.  Somehow, miraculously, they've also had a series of leaders that were not only not disastrous, but in some cases were downright visionary.

So it's interesting to look at how they fared in the recession of 2008:


In the midst of a world embroiled in economic turmoil, a few nations have managed to do surprisingly well—among them, Estonia. After near economic collapse during the 2008–2009 financial crisis, the country has managed to successfully bounce back with substantial GDP growth, a vibrant trade environment, and a notable budget surplus.

Here's a bet for you: Estonia will be amongst the first to opt out of the European Union.  The looming disaster there is going to look very ominous to one of the few high-performance economies in the EU – and given their tiny size, it's easy to predict that they'll be asked to shoulder a completely disproportionate share of the EU's miseries...
Posted by Unknown at (permalink) 5:09 PM No comments:

The little fellow at right is a male black-chinned hummingbird.  I managed to catch him at the right angle to see the bright purple iridescent band around his neck (at most angles, it looks black).  This is a very common hummingbird around here.  It's slightly smaller than the other three species we see, and vastly more aggressive.

Many of the individual male black-chinned hummers have another interesting habit: they eat from our feeders without ever landing on them.  You can see this behavior at left.  This is the same individual shown hovering above right – but note that from this slightly different angle you can not see the purple band.  Sometimes they'll hover in the same position as at left for 45 seconds, apparently guzzling the whole time.  It's avian mid-air refueling!  Only very rarely do we see any of the other species exhibiting this behavior...
Posted by Unknown at (permalink) 4:58 PM No comments: 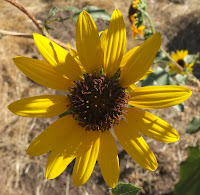 Out near our bird feeders we have a small sunflower plant, currently sporting about a dozen blooms.  Almost certainly it sprouted from the “sterilized” sunflower seed we buy as bird food.  We haven't pulled it for two reasons: we enjoy the cheerful flowers, and the birds use it for both perching and food.  We've seen about eight species on it, but primarily hummingbirds and house finches...
Posted by Unknown at (permalink) 4:52 PM No comments:

How do you get four bad dogs to sit still for a moment?  You train them.  In particular, you teach them that they have to sit still, until called, if they want to get their afternoon meal.  And trust me, they really want their afternoon meal!  Left-to-right (click to enlarge), meet Race, Mo'i, Miki, and Lea.  All sitting oh-so-nicely until Debbie puts their food down and calls them, one at a time.

What happens after that?  Well, if you look at this picture (at left) closely you can pick up some distinct differences in their behavior.  This photo was taken at 1/100th of a second.  Note that Race (upper right hand corner) is blurred – that's because he eats as though his life depends on getting his kibble into his stomach as quickly as possible.  He attacks his food like a rabid badger.  But Miki (lower left) actually eats even faster than Race – but he's much more methodical and efficient about it, like a furry vacuum cleaner, slurping up the food.  Then he takes his time licking his bowl until it gleams like a freshly-detailed car.  Mo'i (lower right) attacks his food with vigor, but with much thought.  Stuff goes everywhere while he's eating, so some bits of kibble pass through his mouth multiple times.  From his perspective, that's probably a good thing.  Finally there's Lea (upper left).  She eats her food at about 1/3 the speed of the others.  She pauses frequently to growl preemptively at her fellow munchers, and we think that's her main pleasure in eating.  Eventually, after everybody else wanders away, she'll finish her meal.  We have no doubt that she has regrets when the meal is finished – not because the food is gone, but because the opportunity to growl at the others has ended...
Posted by Unknown at (permalink) 4:46 PM No comments:


When I went to lunch today, I noticed an old lady sitting on a park bench sobbing her eyes out. I stopped and asked her what was wrong. She said, 'I have a 22 year old husband at home. He makes love to me every morning and then gets up and makes me pancakes, sausage, fresh fruit and freshly ground coffee.' I said, 'Well, then why are you crying?'

She said, 'He makes me homemade soup for lunch and my favorite brownies and then makes love to me for half the afternoon. I said, 'Well, why are you crying?'

She said, 'For dinner he makes me a gourmet meal with wine and my favorite dessert and then makes love to me until 2:00 a.m.' I said,'Well, why in the world would you be crying?'

She said, 'I can't remember where I live!'