Christopher Tolkien is not happy about the Lord of the Rings movies, and anticipates the worst from The Hobbit.  The word “eviscerated” is used...
Posted by Unknown at (permalink) 7:17 AM No comments:

Bet You Didn't Know These Were Visible!


I noticed a couple of things while driving up from Hannibal, Missouri into Iowa last weekend.  The first was that the bottom had completely fallen out of the thermometer and taken the temperature with it.  Second, and there is really no polite way to describe this observation, … but when the temperature drops below 18 degrees Fahrenheit, one can actually see cow flatulence.  I know it's not a savory thought.  Nor is the phenomenon easy to see.  In fact, its almost as elusive as a partial lunar eclipse, or the backbone of a Republican, but I saw it just the same.  Which, of course, set me to thinking about what passes from Washington DC these days.

And then just keeps getting better.

How can you not love a post that starts by discussing the phenomenon of visible cow farts (which I have observed myself)?  Mr. Carter is hands-down my favorite truck driver...
Posted by Unknown at (permalink) 7:14 AM No comments:

Where Are People Moving Too? 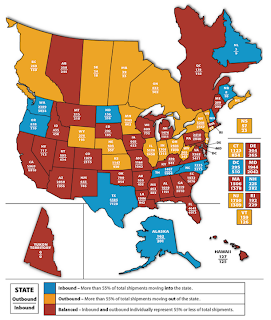 Mind you, this view is a bit biased: it measures moves by Atlas Van Lines, which means it's looking at a slice of relatively well-off movers (a great many people cannot afford to pay the likes of Atlas for their services).  Another thing to watch: some of the absolute numbers are very small.  For example, 3 people moved out of Newfoundland, and 9 people moved in.  With a sample that small, I don't think we learned very much about Newfoundland!

I'm Not Sure How This Ended...

...because it cuts off in mid-action:

Posted by Unknown at (permalink) 7:00 AM No comments:


EMPLOYEE NOTICE
**************************
Due to the current financial situation caused by the slowdown in the economy, the Government has decided to implement a scheme to put workers of 50 years of age and above on early, mandatory retirement, thus creating jobs and reducing unemployment.

This scheme will be known as RAPE (Retire Aged People Early).

Persons selected to be RAPED can apply to the Government to be considered for the SHAFT program (Special Help After Forced Termination).

Persons who have been RAPED and SHAFTED will be reviewed under the SCREW program (System Covering Retired-Early Workers).

A person may be RAPED once, SHAFTED twice and SCREWED as many times as the Government deems appropriate.

Persons who have been RAPED could get AIDS (Additional Income for Dependents & Spouse) or HERPES (Half Earnings for Retired Personnel Early Severance).

Obviously persons who have AIDS or HERPES will not be SHAFTED or SCREWED any further by the Government.

Persons who are not RAPED and are staying on will receive as much SHIT(Special High Intensity Training) as possible. The Government has always prided themselves on the amount of SHIT they give our citizens.

Should you feel that you do not receive enough SHIT, please bring this to the attention of your MP, who has been trained to give you all the SHIT you can handle.

Sincerely,
The Committee for Economic Value of Individual Lives (E.V.I.L.)

PS - Due to recent budget cuts and the rising cost of electricity, gas and oil, as well as current market conditions, the Light at the End of the Tunnel has been turned off.

Posted by Unknown at (permalink) 6:57 AM No comments: