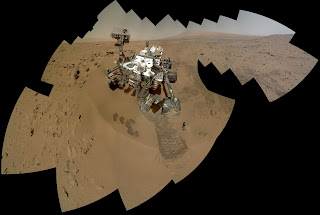 Curiosity delivered several interesting things today.  First, there's the self-portrait at right (full resolution, more info), produced as a composite of many images acquired by the MHLI camera.  Mission controllers use imagery like this to document and assess the state of the rover – at least that's the official excuse.  It's also just plain awesome.  Once again, I'm astonished by the advance Curiosity represents over its “ancestor” rovers. 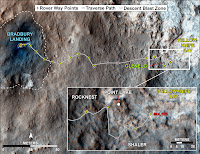 At left is a map of Curiosity's travels since its dramatic landing just over two months ago (full resolution).  Not so long ago we were lucky if we knew for sure that a Martian lander actually landed, and we had a vague idea what quadrant it had landed in.  Now we know the rovers' positions to within a few centimeters – much more accurately, in fact, than I know my own location on Earth.  Awesome stuff!

Finally, there's a new stereo view (an anaglyph, full resolution) that's amongst the best yet to emerge from Curiosity's travels.  The dark spot near the center foreground is the location of some digging that Curiosity did.  If you've got a pair of red/blue glasses, slap 'em on and treat yourself to a 3D view of the surface of Mars.  It's something straight out of the science fiction of my youth:

Suppose you have an opening for a secretary (does anyone actually have secretaries any more?).  Further suppose that 100 people have applied for the job.  You're the only one who can interview them, but you have conflicting goals: you would like to choose the very best candidate for the job, but you would like to interview as few of the candidates as possible.  What's your best strategy?

It turns out to be the following:
By following that strategy, there's a 36.79% probability that you will select the very best candidate of the entire lot.

Go read Nick Berry (at DataGenetics) as he proves it...
Posted by Unknown at (permalink) 4:47 AM No comments:

Just watch.  You'll like the world a little better...