This time by Forbes, for the best states for business...
Posted by Unknown at (permalink) 7:47 AM No comments:

...what's making this girl (on the right) so happy – but whatever it is, I want some!


Something about that happy face of hers really makes me smile...
Posted by Unknown at (permalink) 7:45 AM No comments:


A young girl came up to me in the parking lot this morning and asks, "Excuse me, sir, can I use your phone?  I'm locked out of my car."

She replied, "No.  Fortunately I have my keys right here.  But I think the battery in my unlocked died."  She said this as she showed me the key fob.

When I took her keys and showed her how they unlock the car door, she gasped audibly out of shock.  She had no idea that the ignition key for a car unlocked the door.

I wanted to show that girl a crank window so badly.  That would have blown her friggin' mind! 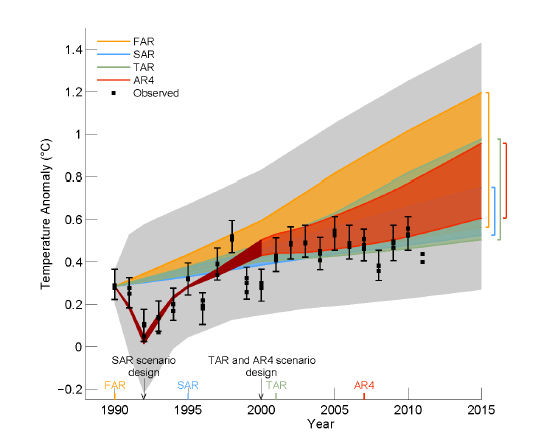 As Anthony Watts says, this is a major bombshell.

The IPCC is in the midst of its process for finalizing and releasing AR5, its next report on anthropogenic global warming.  Alec Rawls is one of the IPCC “expert reviewers”, and he decided to break his confidentiality agreement with the IPCC and released the working draft.  You can read all about his reasons, and download the working draft itself, from Mr. Watts wonderful site WUWT.

I know of two big pieces of news in the leaked report, though I'm sure there will be more, as more people get to chew on the data.  The first one is illustrated in the graph (from the report!) at right: the IPCC is itself reporting that observed temperatures have not trended upwards since the late '90s, in direct contrast to the upward trends predicted by all of the IPCC's climate models.  Skeptics have been reporting this for five years, and until now the IPCC has been denying it.

Probably even more relevant, though, is the discussions in the draft report about solar forcing.  The IPCC scientists (some of them, at least) are reporting strong evidence for amplified solar forcing, even though they don't know the mechanism.  This is precisely what many skeptical scientists have been saying for years: that there is strong evidence that climate variations are caused (in large part, anyway) by variations in solar radiance.  Much of the evidence is observational: high correlation between solar radiance and global temperature.  Some is experimental, most especially the recent experiments (and related observations) about solar wind, cosmic rays, and cloud seeding.  The IPCC has heretofore resolutely denied that solar forcing was playing any part at all in climate change – this represents a radical revision of that position.

This is the first time a draft IPCC report has been leaked.  The first thought I had upon reading the news (and the report) was this: has this same sort of information been in prior reports, but then removed before publication?  That would be precisely the sort of thing a corrupt science bureaucracy would do to protect its own funding...
Posted by Unknown at (permalink) 7:22 AM No comments:

We've had 1.9 inches of rain since Thursday, and there's more in the forecast...
Posted by Unknown at (permalink) 7:00 AM No comments:

Twenty innocent little kids (and six adults) killed in a horrifying way by an armed nut case.  The killer's mother murdered.  The killer committing suicide.  We've seen this movie before, and all too often.

Our minds recoil in horror.  We try to imagine what it must have been like to be one of those victims...and what it is like to be a survivor or someone who loved one of the victims.  It's terrifying, and more terrifying the more we think about it.  We wonder what the reasons might be.  And we see this latest mass murder as part of a pattern of increasing incidence, increasing danger.

On that last point: we're mostly wrong about the pattern of increasing incidence (though there's one small way in which we're right).  There are four main things that contribute to our mistaken pattern detection:
All of the above cause us to perceive that there are more mass murders today than in years past (and also, perhaps, that they are worse).  These are perceptual errors, and they are very difficult to remove.

There is one actual increase in mass murders that I'm aware of, albeit one that's nearly impossible to measure (though its effect can't be very large, as the overall statistics show little increase in the mass murder rate over the past 200 years).  In the 1950s there was a broad push in many countries to stop the practice of committing and institutionalizing the mentally ill.  In the U.S., this culminated with the Community Mental Health Centers Act in 1963, which banned the practice of institutionalization except for very specific cases where the mentally ill person was a clear and present danger to themselves or others.  Before this act went into effect, it was relatively easy for a family (generally with the cooperation of their family doctor) to commit a mentally ill person to an institution for life.  After the act went into effect, commitments to a mental institution were difficult and revocable (in fact, regularly reviewed).  As a very direct result of this act, tens of thousands of mentally ill people who would have been institutionalized under the old system are now as free as everyone else.  Some of these people, one must presume, are amongst the perpetrators of mass murders since 1963.

However, we must be very careful contemplating this – and I want to be perfectly clear that I am not advocating a return to easy commitment.  First of all, the previous system was demonstrably rife with gross miscarriages of justice – people who were merely inconvenient to their families, and not mentally ill at all, were committed to a life sentence in those institutions.  Such abuse proved impossible to stop; it was just too tempting for the unscrupulous and evil.  Secondly, it's demonstrable that many of our modern mass murders would never have been committed, even under the previous system.  We often hear, with famous hindsight, that the perpetrators were “odd” – but that's very different than saying that they were sufficiently odd or disturbed that they would have been committed.  The vast majority of the time these perpetrators surprise those who knew them best.

It's no comfort to know that the rate of mass murders isn't actually dramatically increasing.  But maybe it will help us organize our fears a little better.  You (and your children) are vastly more likely to die of a car “accident”, lightning strike, bee sting, or cancer than as the victim of a mass murderer...
Posted by Unknown at (permalink) 6:58 AM No comments: