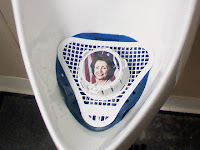 The only problem I have with this idea is that you'd need quite a few urinals to hold the entire rogue's gallery that I'd like to piss on...
Posted by Unknown at (permalink) 11:53 AM No comments:

Tech hiring is picking up...
Posted by Unknown at (permalink) 11:29 AM No comments:

Where Have All the Hackers Gone?

Interesting piece that's related to a plaint I make often: young programmers often (but certainly not always!) know relatively little about how computers actually work.  I keep getting surprised by how possible it is for such engineers to be very creative and productive – but every once in a while, the knowledge that was so essential as I began my career is still essential.  And becoming less and less commonly available, despite the vastly larger number of programmers these days than in the days of yore when I first met hexadecimal...
Posted by Unknown at (permalink) 11:28 AM No comments:

There's likely to be little-to-no blogging here, from tomorrow through next week.  My company is putting on its annual user conference, and I'll be there presenting and meeting our customers.  This year's attendance is much higher than we anticipated, and the event is completely sold out.  Should be exciting!  And busy...
Posted by Unknown at (permalink) 11:04 AM No comments:


In years to come – assuming, for the purposes of argument, there are any years to come – scholars will look back at President Barack Obama's Nuclear Security Summit and marvel. For once, the cheap comparisons with 1930s appeasement barely suffice: To be sure, in 1933, the great powers were meeting in Geneva and holding utopian arms-control talks even as Hitler was taking office in Berlin. But it's difficult to imagine Neville Chamberlain in 1938 hosting a conference on the dangers of rearmament, and inviting America, France, Brazil, Liberia and Thailand … but not even mentioning Germany.

As always with the inimitable Mr. Steyn, read the whole thing...
Posted by Unknown at (permalink) 11:00 AM No comments:

Political Cartoons of the Day... 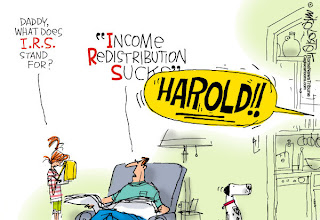 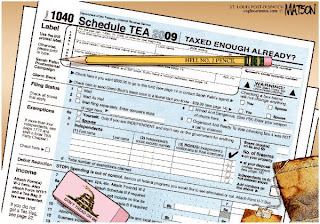 Posted by Unknown at (permalink) 10:56 AM No comments:

Interesting map via Real Clear Politics in a post I linked to yesterday.  This map got me thinking, so I'm highlighting it here.  The dark blue states are where Obama has a +10% or more approval rating, the light blue a +5% or more, and so on down to the dark red where his rating is -10% or more.

Note first that the blue states are all those with our largest cities, the traditional strongholds of both Democrats and unions.  The dark red states are all completely unsurprising – exactly where you'd expect a (now proven) progressive to be disliked.

But there are a few surprises to me on this map, and I think this bodes very ill for the Democrats in November, barring some kind of miracle (like, say, a spectacular economic recovery).  Consider these states: Ohio, Michigan, Pennsylvania, Vermont, and Florida.  These are all states you'd expect to be gung-ho supporters of a progressive President – but they are not.  There are varied reasons for this per state, but overall it looks like Obama has managed to alienate an interesting percentage of even his base.  Great!

Combine this with the high level of energy on the anti-Obama side of the equation, and I'm starting to feel downright optimistic about November.  The past tells me I shouldn't be – there are just too many sheeple running around worrying about weighty matters like pink disco balls – but I just can't help it...
Posted by Unknown at (permalink) 10:51 AM No comments:

So said Obama on Thursday, referring to Tea Party “tax day” protests.  First he claimed to have reduced taxes, next he mocks the citizens protesting (amongst other things) high taxes.

I'm not the only one who's upset about this: I'm in excellent company with Darleen, No Sheeples, Allahpundit, Krauthammer, Rush, and Scott Brown.

But Rush is right: November is coming...