Via Simon M., this musical tribute to Rick Santorum.  So far as I've been able to discover, this video was not sponsored or paid for by the Santorum campaign; it appears to be a genuinely spontaneous expression of support for him.


I haven't commented on the Republican horse-race much, as I'm not finding it very interesting, and certainly not inspiring. It looks like it's coming down to one of three possibilities:
The last time the Republicans had a brokered convention, Reagan emerged the winner.  That sounds great, except for one little niggling detail: there's no Reagan anywhere in sight...
Posted by Unknown at (permalink) 5:17 AM No comments:

An exposé in (of all places!) the Washington Post lays it all out quite nicely.  The bottom line: a grand fiscal bargain was within reach last year, but Obama – Obama alone – trashed it.

Now mind you I'm not entirely sure that the grand bargain would have been better than the current mess.  For instance, had we in fact reached a bargain, Obama's prospects for re-election would almost certainly have been better.  Nevertheless, it is dismaying to see the incompetence by our chief executive on display...
Posted by Unknown at (permalink) 5:07 AM No comments:

Our Political Class is Unserious...

That's not exactly new news, I know.  Alan Blinder has a piece in today's WSJ that nicely outlines the “fiscal cliff” we face in 2013.  That would be the cliff that our national politicians (a) created, and (b) are doing nothing whatsoever about.  His lead:


At some point, the spectacle America is now calling a presidential campaign will turn away from comedy and start focusing on things that really matter—such as the "fiscal cliff" our federal government is rapidly approaching.

The what? A cliff is something from which you don't want to fall. But as I'll explain shortly, a number of decisions to kick the budgetary can down the road have conspired to place a remarkably large fiscal contraction on the calendar for January 2013—unless Congress takes action to avoid it.

Well, that gives Congress plenty of time, right? Yes. But if you're like me, the phrase "unless Congress takes action" sends a chill down your spine—especially since the cliff came about because of Congress's past inability to agree.

Do go read the whole thing. It's quite depressing...
Posted by Unknown at (permalink) 5:03 AM No comments:

Snow on the Mountain...

At higher elevations in our local mountains, it's still cold enough for snow – and with the current storm, we have plenty of it.  Debbie and I took a drive up and around Cuyamaca Mountain yesterday afternoon.  These photos will give you some idea what we ran into.  We thought the snow-covered flowers (like the blue ceanothus below) were particularly beautiful.  As usual, click to enlarge... 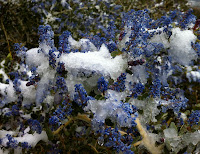 Posted by Unknown at (permalink) 4:58 AM No comments:

We're now at 2.7 inches (7 cm) of rain for the storm (click to enlarge the graph at right), and the NEXRAD radar shows more headed our way.  The forecast calls for a 40% chance of rain today, then fair weather the rest of the week.  Man, are we wet!
Posted by Unknown at (permalink) 4:40 AM No comments: