Over the years I've been surprised many times by the general ignorance U.S. citizens have of how their top marginal tax rates have changed over the years.  In particular, few people seem to know how much higher these rates were between the FDR and Reagan administrations.  The chart below shows this very nicely (as usual, click to enlarge). 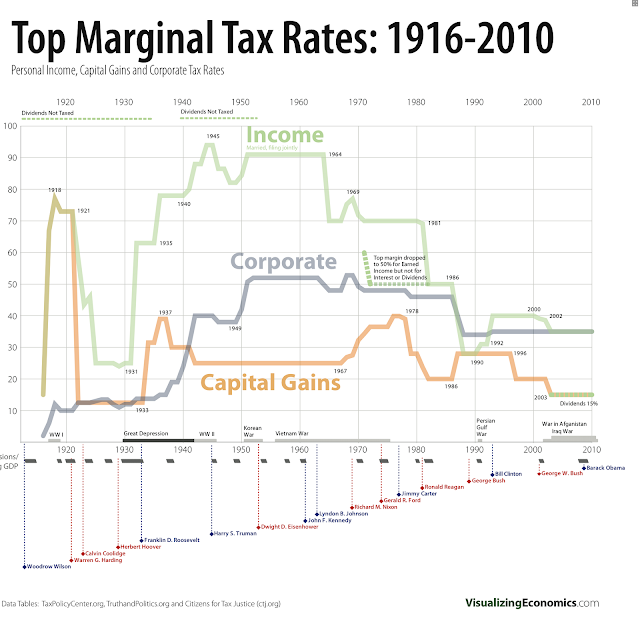 There are many interesting observations one can make from this chart.

One that progressives like to make is that we have a lot of experience in economic boom times (say, the late '50s) with very high top marginal rates – therefore such rates are not the destroyer of jobs claimed by the conservatives.  However, it is simultaneously true that the very wealthy back then had relatively easy access to tax shelters, and in fact very little income was actually taxed at that rate.  The real world is messy and complicated.

An observation that conservatives like to make is the strong correllation between the dropping of tax rates and the subsequent ramping up of the economy (this happened both in the late '20s and early '90s).  But progressives can point to other factors that influenced those economic upturns, including other roughly simultaneous changes in the regulatory environment.  The real world is messy and complicated.

So be careful reading too much into the squiggles on this chart.  Nonetheless it's a useful piece of any U.S. citizen's political education – no matter what one's political beliefs, this chart encapsulates the past century's history of one of the most significant consequences of elections: the setting of our tax rates...
Posted by Unknown at (permalink) 7:41 AM No comments:

From APOD, of course: 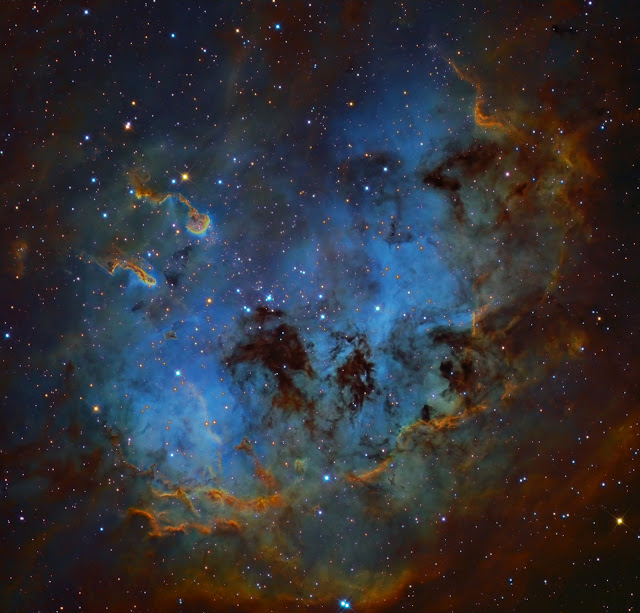 Mark Steyn, as only he can:


The other day the post office apologized for its new stamp honoring Lady Liberty. Due to an unfortunate error, the stamp shows not the 19th-century Statue of Liberty that stands in New York Harbor but the 1990s replica that stands at the New York–New York Casino in Las Vegas.

An ersatz statue of pseudo-liberty standing guard over the world’s biggest gambling operation: What better way to round out a week in which the Republicans pretended to pass the most historically historic budget cut in history while the president pretended to come up with a plan to address the debt? All while pretending to wage a war in Libya whose most likely outcome seems to be that the only Arab dictator to sleep soundly in his bed at night during these turbulent times will be doing so under cover of a NATO no-fly zone for the rest of his 75-year term of office. In such a world, the USPS, bless ’em, has come up with a far more plausible emblem of societal devastation than Hollywood’s space monsters and climate-change fairies.

Ah, Mr. Steyn. How could I despair without you?
Posted by Unknown at (permalink) 6:39 AM No comments:

Complete with the screechy voice.  It's impossible for anyone to reconcile the left's portrayal of her intellectual capacity with the content of that speech.  It's also impossible to miss the fact that she's the only national politician who effectively leveraged the recent events in Wisconsin – which she, alone, recognized as watershed events as they occurred.  Sarah Palin taken as a complete political package is one very impressive politician, whatever one may think of her views.

The 2012 election cycle promises to be even more interesting – and consequential – than the 2010 cycle.