A Wisconsin farmer named Olie (Olav) had a car accident. He was hit by a truck owned by the Eversweet Company, a Harley Westover Company.

In court, the Eversweet Company's hot-shot attorney questioned him thus:

'Didn't you say to the state trooper at the scene of the accident, 'I'm fine?"

'I didn't ask for any details', the lawyer interrupted. 'Just answer the question. Did you not say, at the scene of the accident, 'I'm fine!'?'

Olie said, 'vell, I'd yust got Bessie into da trailer and I vas drivin' down da road.... '

The lawyer interrupted again and said, 'Your Honor, I am trying to establish the fact that, at the scene of the accident, this man told the police on the scene that he was fine. Now several weeks after the accident, he is trying to sue my client. I believe he is a fraud. Please tell him to simply answer the question.

By this time, the Judge was fairly interested in Olie’s answer and said to the attorney: 'I'd like to hear what he has to say about his favorite cow, Bessie'.

Olie said: 'Tank you' and proceeded. 'vell as I vas saying, I had yust loaded Bessie, my fav'rit cow, into de trailer and was drivin' her down de road vin dis huge Eversweet truck and trailer came tundering tru a stop sign and hit my trailer right in da side by golly. I was trown into one ditch and Bessie was trown into da udder ditch.

By yimminy yahosaphat I vas hurt, purty durn bad, and didn't vant to move. An even vurse dan dat, I could hear old Bessie a moanin' and a groanin'. I knew she vas in terrible pain yust by her groans.

Shortly after da accident, a policeman on a motorbike turned up. He could hear Bessie a moanin' and a groanin' too, so he vent over to her. After he looked at her, and saw her condition, he took out his gun and shot her right between the eyes.

Den da policeman came across de road, gun still in hand, looked at me, and said, 'How are you feelin'?'

Posted by Unknown at (permalink) 12:49 PM No comments: 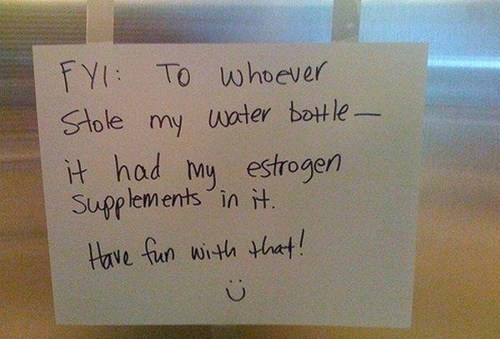 There are petty thieves in almost every workplace.  They drive their fellow workers crazy by stealing drinks and food that belong to others, usually from the refrigerator.

Whoever posted the sign at right has secured revenge for all of us :)
Posted by Unknown at (permalink) 12:47 PM No comments:

Cisco appears to have completely given up on its various forays into consumer electronics, selling off the profitable Linksys line to Belkin.  I have no idea whether those forays actually made good business sense, but what is clear is that Cisco has been punished by investors for having done so.  The Flip video fiasco actually impacted us personally – we owned one of those things.  This sale won't impact us directly, but it saddens me.  Linksys is a solid brand, with good-to-great products at very fair prices.  Belkin is a schlocky brand, known (quite justifiably, in my own experience) for iffy products and high prices.  I suppose its possible that Belkin could leverage this acquisition to push their own reputation uphill, but somehow I suspect that the opposite is more likely.  I fully expect to see “Linksys” slapped onto Belkin's existing networking products – the electronics equivalent of lipstick on a pig...
Posted by Unknown at (permalink) 7:49 AM 1 comment:

Some interesting thoughts from a female veteran, and this post has links to three other excellent articles, all thought-provoking.

If politics weren't part of the mix, I'd say there was a chance (albeit a small chance) that the military could figure out how to do this right.  Throw politics into it, though, and I think it becomes impossible.  And of course politics is in the mix, inevitably so, as Congress controls the military's purse strings...
Posted by Unknown at (permalink) 7:37 AM No comments:

A collection of beautiful and fascinating photos taken in 2012, like the photo below of Mt. Rainier (in Washington State) casting a shadow up onto the cloud bottoms... 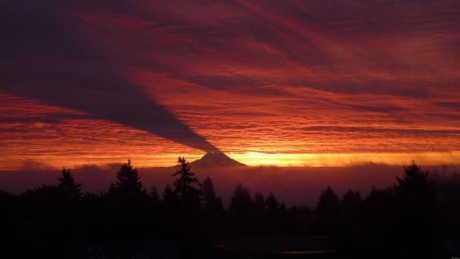 That's It, the Internet is Finished!

Posted by Unknown at (permalink) 7:29 AM No comments:

Labels: The Internet Is Finished

It's been eight years or so since I last visited this little country.  I ran across this beautiful photo taken yesterday near Suurupi, Estonia, and it reminded me of my own delighted treks through the forests and backcountry of Estonia... 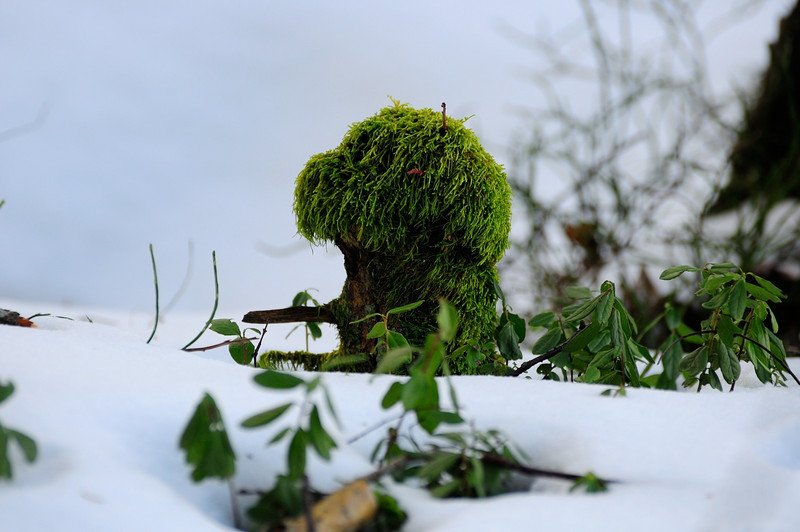 Another in a series of similar ads.  Each of these makes me wonder how I'd react were I to witness this...

Danny and Gina articulate the reasons why it makes no sense for them to work – and makes great sense for them to  stay on welfare.  They're young (21 and 18, respectively) and have a kid.  They live in a nice apartment, they have a big TV, they can afford their main vice (smoking), and they feel no guilt about sponging off the taxpayers (check out their reasoning).  If they were to take a job (which they admit would be easy for them to do, even though neither of them has any notable skills), their take-home income would actually go down (because their income would be taxed and their eligibility for welfare reduced).  Their reasoning is impeccable.  They are absolutely correct – they're better off on welfare than working.

Now of course they could undertake to get the education required to get a better job, and then go compete in the marketplace.  Many people (hopefully, most people) would do exactly that.  But that's all such a terribly large effort, fraught with the possibility of failure.  If, instead, they can just sit at home and rake in the welfare checks – that's ever so much less work and has no risk to themselves at all.

The important elements of this situation are already in place in the U.S., most especially in our large cities.  The progressive agenda keeps putting more pieces in place (Obamacare is a huge example).  During Clinton's administration significant welfare reform took a big step in the right direction, but the Obama administration and the predominantly Democratic administrations of most of our large cities are rapidly undoing those changes.  On our current trajectory, I'd estimate that the U.K. is only 5 to 10 years ahead of us.  So we can look forward to our own millions of Danny and Gina, whom the rest of us will support by having the fruits of our own labor stolen from us by “progressive” politicians.