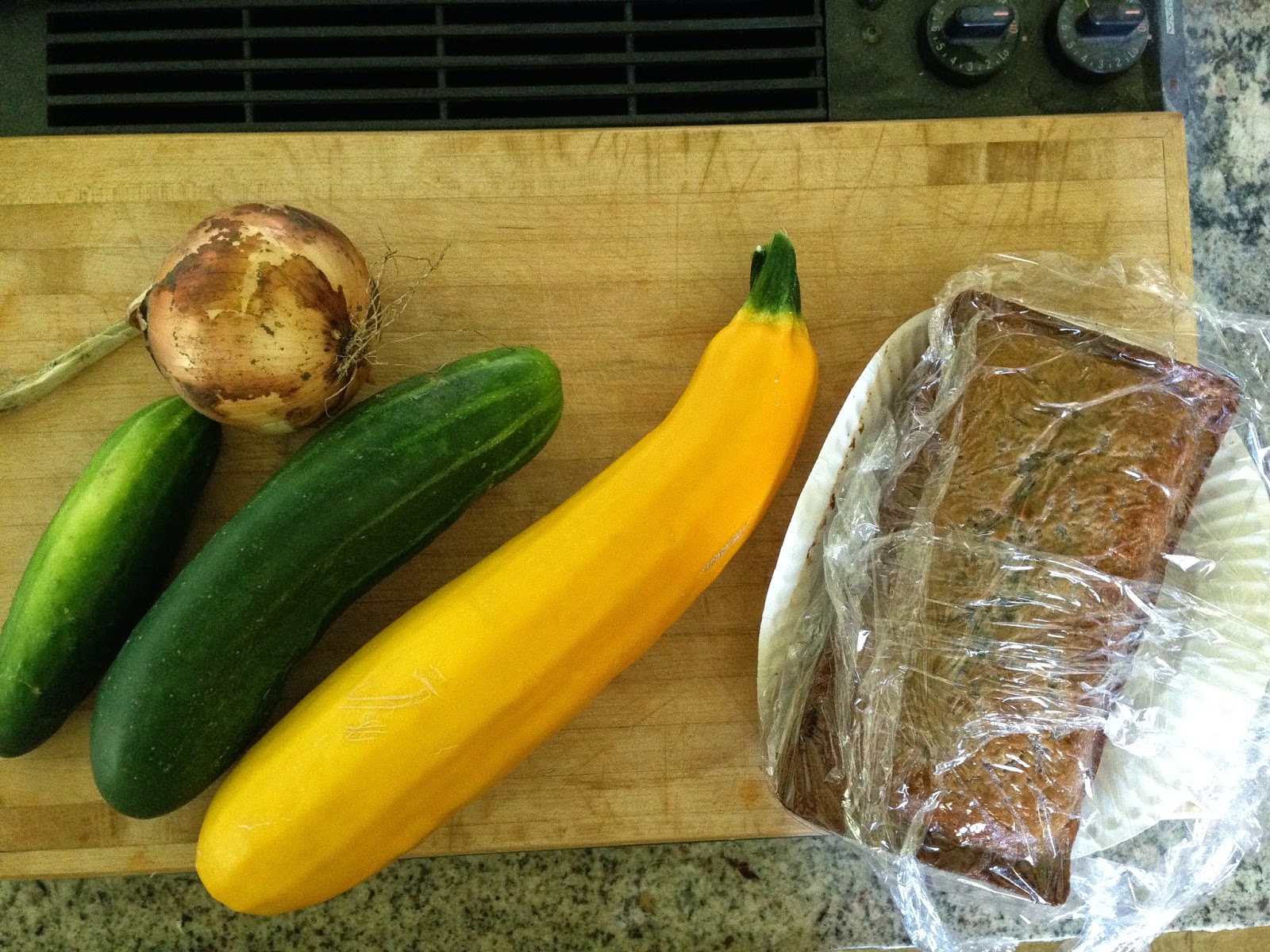 Neighbors bearing gifts...  A few minutes ago my front doorbell rang, which is a very unusual occurrence.  I went down to greet my visitor, and discovered the two oldest (about 9 and 11 years old) sons of my neighbors to the west, with their arms full of gifts from their garden: an onion, two cucumbers, a zucchini, and a fresh loaf of zucchini bread.

Yum!
Posted by Unknown at (permalink) 2:49 PM No comments:

The great garage door opener project...  I just finished installing two replacement garage door openers (our garage has two roll-up doors).  The old openers were 22 years old and practically falling apart.  I discovered this while prepping the garage for painting.  When I was up on a ladder, I could see down into the chain drive mechanism – and what I saw wasn't good.  I'm fairly certain that none of the moving parts that required lubrication had ever been lubricated.  Some chain links were worn right through, and all were loose and “rattly”.  I checked into replacement parts, and they would cost nearly as much as a new unit – so I opted for two new units, this time with quieter belt drives.

I got lucky on the doors – they are quite nice quality, with sealed ball bearings in the wheels and in the torsion spring assembly.  The hinges and wheel brackets needed lubrication, as did the torsion springs, but everything else was in great shape.

I'd never installed a garage door opener before, so this was a learning experience for me.  It was actually pretty easy; the instructions were very clear and complete.  The old openers' wiring had been installed by stapling it to the ceiling and walls, which was quite ugly and also vulnerable to an accident (shovel handle, rake, etc.).  So I tore out all the existing wiring, spackled up the staple holes, and installed all new wiring inside of 1/2" PVC pipe hung from properly fastened conduit hangers (also PVC).  Then I primed and painted the pipes to match the garage walls and ceiling.  The result is, I think, much better looking than the stapled wire – and it is certainly more resistant to any physical abuse I might give it!


Posted by Unknown at (permalink) 2:36 PM No comments:

Old computer ad...  From 1952, the year I was born.  High resolution version here.  The computer is based on vacuum tubes and crystal diodes (an early version of semiconductor diodes).  The main memory was about 2kb, and the tape mass storage about 400kb – absurdly small by today's standards (and about one 30 millionth of my laptop!).  The clock speed was 120 kHz, about one 25,000th as fast as my laptop.

Some things that I noted as I read the ad:

What makes a pear taste like a pear?  That would be ethyl acetate, but the story is a bit more complicated than that.  Artificial flavors keep getting better, because we're learning what makes natural foods taste they way they do in far more detail than ever before.

A few years ago, in England, I had a glass of alcoholic pear cider that I thought was outstanding.  It was pleasantly fizzy, slightly sweet, and evocative of a fresh, ripe pear.  I was certain, in my own mind, that it was a craft-made product, involving barrels of overripe pears crushed by the feet of sweet young maidens and fermented in an old oaken barn.  Nope.  It was, instead, a laboratory creation.  There wasn't a molecule of pear in it – it was completely artificially flavored.  And it was fantastic!  Since then I've had a few other pleasant surprises with artificial flavoring – still the exception, but it's happening more often.

I hope someone will tackle tomatoes.  I miss the flavor of an excellent fresh tomato...
Posted by Unknown at (permalink) 4:17 AM No comments:

Expatriation tax...  I just stumbled across the existence of this U.S. federal tax.  Basically it's a capital gains tax on all assets, marked to market, of anyone renouncing their U.S. citizenship (there are some exclusions and limitations).  Apparently the U.S. is one of just five countries (one of which was Nazi Germany!) that have imposed such a tax.

If all that is gobbledegook to you, let me give you a simple example.  Suppose that when you were 25 years old (and a U.S. citizen), you bought $100,000 worth of Google stock.  Now you're 40 years old, you still own that stock (now worth $5 million!), you're disgusted with the Obama regime, and you've decided you want to be a citizen of Singapore instead of the U.S.  So you rent a flat in Singapore, move, and renounce your U.S. citizenship.  The IRS says that you owe capital gains tax on $4.9 million (the increase in your Google stock's value) even though you haven't sold your Google stock.  That means you have to cut a check to Uncle Sam for $735,000!

I see the rationale for this: the tax man wants his cut for anything you've “earned” while you were still a U.S. citizen.  In the example I gave, the stocks are a relatively liquid investment and some could easily be sold to pay the tax bill.  However, the tax isn't limited to liquid assets – it applies equally to illiquid assets like real estate, collectibles, etc.  For individuals with substantial portions of their assets being illiquid, this tax could represent a serious impediment to leaving the U.S. (and the way I found out about this tax was through just such a story).

But all that aside – this just seems un-American to me.  Voting with our feet is a quintessentially American freedom, and the expatriation tax interferes with that.  The stated purpose of this tax is to prevent the flight of capital (or at least, to reduce the incentives for it) – but a far better way to accomplish that would be to make it more attractive for capital to stay in America.  Putting up barriers isn't the American way...
Posted by Unknown at (permalink) 4:10 AM 2 comments:

Submarine cable map...  This is the best one I've seen.  The image at right is one small section of it...
Posted by Unknown at (permalink) 3:48 AM No comments:

Mannomatic filtering...  The technical types over at Climate Audit are reverse-engineering Michael Mann's temperature data manipulations (the ones that led to his infamous “hockey stick” graph).  It's fascinating reading (including the comments) if you're at all interested in the data underlying the IPCC's repeated declarations of impeding climate doom.  This particular investigation is close to one of the things at the heart of what makes me most skeptical of the warmists' position: the opaque, secret, and (as shown by ClimateGate revelations) deliberate manipulation of the data used to support it.  Close behind it: the reliance on climate models that have utterly failed in their correspondence to reality...
Posted by Unknown at (permalink) 3:44 AM No comments: