We got up this morning rather late by our standards, had a little breakfast, and then walked over to the Riverside Inn to pick up our rental jeep.  It was quite a different experience than the usual rental pickup, as Angela and Rodney (who helped us) seemed more like friends than counter clerks.  The whole process was both pleasant and painless, not a hitch anywhere in the process.  Within 30 minutes or so, after Rodney walked us through a familiarization, we were driving out in our jeep.  We took an easy and familiar road today (the road to Yankee Boy Basin, which is where I took the shot at right), partly to let me get familiar with the “feel” of this machine that is so much smaller than the LandCruiser I'm most familiar with.  After a few miles, I was feeling pretty confident in it.

Our overwhelming impression from today's trip was water.  This year's heavy snowpack is melting, and the runoff is visible everywhere.  Every cleft in the mountains has a stream in it.  Streams we remember as rivulets a foot or two wide are raging rivers.  Water is sluicing off the mountainsides from places that don't look like likely sources of water at all.  Forests have turned into marshlands, some of them with a foot or more of standing water.  It's nothing at all like the dry-floored forests we remember from our visit a few years ago. 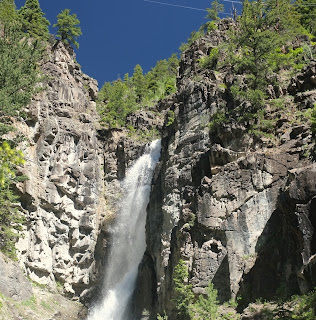 Yankee Boy Basin is mostly above 11,000', and it's too early for it to be in bloom.  We see a super-abundance of plant life bursting out of the ground, but very little is in bloom.  We did see some, though, as you can see in the photos below.

As far as wildlife, all we saw today were marmots.  Lots of marmots.  We also saw a few deer.  We did see a very few birds (mostly crows), but no lizards or snakes, and no other mammals.  I'm guessing it's still too early in the season...

We also took a couple of short side trips, just to see what was open.  First we tried to go up to Governor Basin, but we were turned around in short order by snow drifting over the road.  Then we drove for a mile or so down the road to Imogene Pass, which was clear but wet (nothing hard to get through, though).  We'll be coming back to both areas before the trip is over.

Ok, now for the plant and flower photos.  There are only a few of these that I can identify... 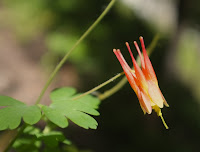 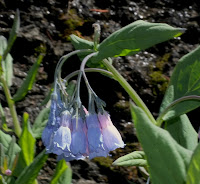 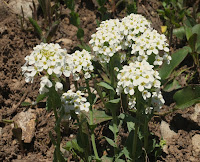 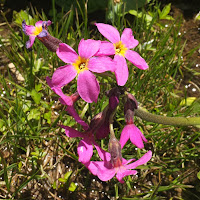 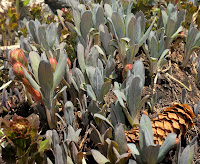 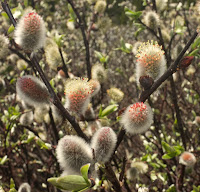 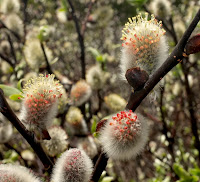 Posted by Unknown at (permalink) 7:48 PM No comments:

Made it to Ouray after a beautiful day's drive and sight-seeing – but it's late, and we're tired.  Also a little cranky, as the cabin wasn't open as promised, and we had to scramble for over an hour to locate someone to let us in.  Furthermore, the cabin itself is a bit disappointing – not awful, but not what we thought we were getting based on the description.

But we're here, we're unloaded, we've made a local friend already (more on that later), and now we're headed for bed.  More tomorrow, with photos...


We left Cedar City at 4 am.  The only place to get coffee at that hour was the local 24-hour McDonald's, so we grabbed a cup and hit the road.  The road to Cedar Breaks was open, so we headed up there; dawn was just lightening the sky as we arrived.  We spotted a porcupine along the drive, scurrying away from the road.  In the dim light he was sort of ghostly looking – his light-colored spines looked like a cloud moving around him.

Coming down the mountain to the northeast of Cedar Breaks, we passed through some beautiful lake and farm country.  At one spot, we saw some happy cows munching away on grass and flowers, amongst steaming streams and ponds.  This was just before sunrise, and the lighting made for a very attractive scene.

Then we headed down to Panguitch, a sleepy little farm town, and saw something most unexpected: a hot-air balloon rally.  We like the Smokey Bear balloon (at left in the photo at right)...

After that we headed past Bryce Canyon and down to Escalante town, just before crossing the Escalante Staircase country.  There we had a great cup of espresso to wake us up, and in the same shop purchased a replacement hat for my old Tilley hat (which had ripped when I put it on this morning).  The staircase country is one of my favorite parts of Utah.  I can't quite put my finger on exactly why, and certainly not everybody sees it the same way (Debbie, for instance, would be quite happy to skip it altogether).  But I do love it.  There's something about the beautiful contrasts of off-white and red rock with the bright green foliage from the water-rich canyons that just grabs me.  The photo at right is a great example of the vistas that I love the best...

Then we zoomed through Capitol Reef National Park, where I really hated to be in a hurry.  It was still early morning, and the lighting was just beautiful.  But hurry we did, through the park and down to Hanksville, up to the I-70 and through Green River, melon capital of the U.S.  We drove through town looking for melon sellers, but apparently it's too early in the season; there wasn't a one to be seen.  Oh, well.  Then more zooming down to Moab, a brief stop for Debbie to do some turquoise shopping, and then a loop to the west and then south of the La Sal Mountains, place of many previous adventures of ours.  We continued east into Colorado.

There the highway drops suddenly down into a long, broad valley full of farms.  We're not sure what the name of this valley is, but it's the start of some farm country that we really enjoy driving through.  Many of the little towns look like they're stuck in the '50s, and they're chock full of earnest, pleasant, hard-working people.  Along the way through this valley we saw an honest-to-goodness cattle drive, complete with 4 or 5 cowboys on horses, a half-dozen working dogs, and a whole mess of steer.  Lots of hamburger on the hoof!  We were so enjoying watching the cattle drive that I completely forgot to snap a few photos!  We passed through the town of Bedrock (Post Office below), and saw lots of a beautifully backlit grass.

After that, it was zoom, zoom, zoom all the way to Ouray.  Well, first there was a detour to Montrose for some shopping (groceries and a few four-wheeling supplies), then down to our cabin in Ouray.

This is when our beautiful day started to go downhill.  We had warned the innkeeper that we'd be arriving late, and we had arranged for the cabin to be left unlocked for our arrival.  But when we got there – at 9 pm on Saturday – we found it locked up tight.  The property managers didn't answer their phone, and the message I left got us nowhere.  I left email; same result.  We had nothing else to go on, so we thought we were in big trouble.


We wandered across the street to the Riverside Inn, hoping that they were the ones taking care of the property.  They weren't, unfortunately.  But they were very sympathetic, and immediately offered to provide us with a room to hold us, our dogs, and our rapidly-warming groceries.  We were on the verge of accepting their offer when it occurred to me that I had a name of someone who lived in Ouray who was associated with the cabin.  I asked Angela at Riverside Inn if she could help me locate this person, and she whipped out the Ouray phone directory (a single sheet of paper!) and found my person.  She dialed the number for me and shortly I was connected with the very person I'd been trying to reach for the preceding hour.  This person was disbelieving that our cabin was locked, but she came down (not enthusiastically by any means) and unlocked it – we were in!  Then we spent the next couple of hours unloading the truck, unpacking, and generally settling in.  We were disappointed that the cabin wasn't a standalone unit as we'd expected, but rather a quad (four "cabins" in a single building).  We didn't get to bed until nearly midnight, and we were grumpy.  But at least we had our cabin...
Posted by Unknown at (permalink) 6:18 PM No comments: