It's a winter wonderland here... 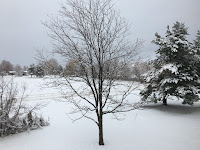 It's a winter wonderland here...  We've got about a foot of snow on the ground down here in Paradise.  My brother Scott, up in Newton, tells me that there's only a few inches there.  We've been getting snow nearly all day today.  The temperature is hovering right around the freezing mark, so it's all wet, gloppy, heavy stuff – hard to plow and heavy to shovel. There's more snow in the forecast through Christmas Day, and temperatures are forecast to slowly go down from now through 8 days from now – down to near zero at night, and sub-freezing daytime highs.  It's wintertime, for sure!
Posted by Unknown at (permalink) 1:16 PM No comments:

Shopping in Texas...  Via my pistol-packing, turkey-roasting mom:
Posted by Unknown at (permalink) 11:04 AM No comments:

Paradise ponders...  A busy day here yesterday, mostly good, but with one oddity and ending on a very sad note.

I delivered a chocolate cake (Debbie's creation) to Bruce and Jun in the morning.  I got to meet their daughter and a passel of grand-kids, and had a nice conversation.  Their house is perched on a knoll near Avon, overlooking the southern end of the valley.  In the winter, with snow, their view is simply spectacular.

After I returned from that, I set out on a several errands (picking up some odds and ends for Scott's cabin), then stopped at the Toyota dealer here in town to order my new Tundra.  I reiterated what I was looking for (which I knew from previous conversations wasn't on the lot of any dealer in the U.S.), and then they made the standard attempt to get me to take something that was in inventory.  I said no, and they disappeared into the back to order what I actually wanted from the factory.  After I waited for almost an hour, they came back out and told me that they couldn't order exactly what I wanted – because the color “wasn’t authorized” with the other selections I'd made.  Now this made no sense at all to me, and I strongly suspected my chain was being jerked – that they just wanted to coerce me into taking a color I didn't want.  So I walked out.

If Tesla made a pickup truck, and it cost twice what the Toyota does, they'd have an instant customer – just to get the excellent, BS-free purchase experience.  Now I'm stuck with an unpleasant set of choices: buy something other than what I actually want from the local dealer, search for another dealer who doesn't jerk me around, or give up on the whole idea of a new pickup.  Elon Musk, are you listening?

After stomping out of the Toyota dealer, I headed out to Scott's cabin.  When I got there, he was outside washing his truck – with 6" of snow on the ground, and more falling.  I may be the closest thing to normal in my family, and that should terrify the rest of the human race :)  The first thing I did inside the cabin was to see if I could figure out why his heater was being unreliable.  I had thought, from the symptoms, that his condensate pump was acting up and the safety interlock was keeping the furnace from working.  I quickly figured out that was not the case when I cleverly noted that the safety interlock wasn't even connected.  After poking around a bit I came to the conclusion that (a) the problem was beyond my skill set, and (b) I'd already planned to replace the ancient thing (it's 24 years old), so I dialed up Ryan Osborne (435-994-0666), the fellow who did such a nice job on the HVAC for our Paradise home.  To my surprise, he was available to come out to the cabin within the hour!  Right on time, he pulled into our driveway.  Within 15 seconds of seeing the heater and hearing the symptoms, he diagnosed the actual problem.  Then he told me it wasn't worth repairing the thing, and that I should replace it.  Since that was my intention anyway, we segued right into a conversation about models, capacity, etc.  Turns out he also does water heaters (something I hadn't known), and he's also going to replace the ancient, tiny electric water heater with a modern 50 gallon high efficiency propane water heater.  Those two jobs will be done today.  In the spring, he's going to come do the air conditioner compressor (also on its last legs) and put a split system in the upstairs room.  The cabin is about to get a major infrastructure upgrade :)

Yesterday I contacted the folks at Golden Spike Electric to get a quote on a backup generator, and at Synergy to get a quote on solar panels.  The water softener and conditioning guy will be at the cabin today to put in a good dual-tank water softener (with 18 GPM capacity) and an iron removal system.  With any luck at all, within a couple of months the cabin will have reliable heat, great water, reliable hot water, backup power, a working garage door and opener, good air conditioning (including upstairs), and free solar power for the air conditioning on hot days.  A lot of that list will be done today!

While I was doing all this stuff, Debbie was at home baking.  One of her creations (a lemon cake) is a favorite of our friend and neighbor Tim D.  She'd made one for him, and texted him to see if we could deliver it.  He wrote back to give him 10 minutes to finish his chores, and then he'd be ready.

So we waited 10 minutes and headed over to his house.  When we got there and rang the doorbell, Jeannie (his wife) answered with tears running down her face.  She could hardly talk, but managed to get out that Louie, Tim's beloved little dog, had just been killed by a car – right in front of Tim.  This is something right out of our nightmares, and its the entire reason we're so careful about keeping our dogs on-leash or in a fenced area.  Tim's dogs wouldn't normally cross the highway in front of his house, but last night there were some kids across the road sledding on a hill, and that was a magnet for poor Louie.  Tim was frantically trying to recall him when a car flying down the highway (55 MPH speed limit) ran over him, killing him instantly.

Tim was an emotional wreck when we walked in.  Debbie and I visited with them for a half hour or so, doing our best to give some comfort, but of course there's nothing one can really do to help in a situation like that.  We delivered our cake anyway, but I'm sure it will be some time before Tim can enjoy that sort of thing again.  Our hearts go out to them, on this tragedy that is all too easy for us to empathize with.

There was one little high point while we were at Tim's house.  We sat in the living room talking with them, and in there is a small table that normally has knick-knacks on it.  Now it has just the little collection of “teasel people” that my mom made for them as a gift last Christmas.  Both Tim and Jeannie lit up as the described all the nice comments people make about those teasel people.  Everybody here knows teasel, thinks of it as an evil weed, and to see it made into such a cute, pretty little craft project is really startling to them :)

We're feeling very sad about Louie this morning, and for our friends who are grieving at the loss of their furry family member –  most especially for Tim, who loves his two little dogs like they were his kids.  Louie was just four years old; Tim's other dog (Lexie) is eleven (and still in great health, thankfully)...
Posted by Unknown at (permalink) 6:35 AM No comments: