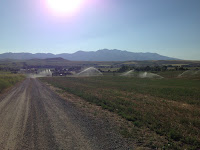 Evening in Paradise...  Just got back from an evening walk with da boyz (our three dogs).  It's just starting to cool off the tiniest bit, down to 92° from the high of 95°.  I must be getting used to this – I worked outside nearly all day, and didn't really get overheated (though I certainly took things slowly!).

Walking back toward home on our walk, downhill, we were looking directly into the sun.  The irrigation systems were all nicely backlit, and stood out all the way across the valley.  You can't really see the distant ones in this photo, though I could see them clearly with my Mark I eyeballs.

The sprinklers next to the road misted us in three separate places, and that felt good to all of us.  Miki (our smart little guy) figured it out after two sprinklers, and planted himself firmly in place on the third.  He stayed there, eyes closed, for four sprinkler rotations.  By that time he was nicely wetted, which would have cooled him nicely.  Meanwhile, Race and Mo'i got as far away from the water as the leash would let them, and looked at Miki as though he had lost his dogly mind :)
Posted by Unknown at (permalink) 6:05 PM No comments:

Narva ... the Estonian city on the border with Russia.  Here's an interesting article about the place, with enough context to help non-Estonians understand just why they find the Russian threat so real.

I've visited Narva several times, and also driven from Narva through Russia to St. Petersburg (once with an Estonian friend, another time by myself).  I've also spent a number of days along the northern Estonian coastline (along the Baltic Sea), in every season.  It's quite a beautiful place, most especially in the spring.  There's a lot of good hiking in the area, which might surprise you if you casually inspected a map.  I can attest to the Narva area being nearly 100% Russian.  The character of the area is far more like Russia itself than the rest of Estonia is.  With apologies to my Russian friends, that's not a good thing.  What you notice immediately upon entering an all-Russian area is the trash along the roadside.  The Russians are the worst litterers I've ever run into.  One summer I hiked for about an hour along a river near Narva, as it approached the Baltic Sea.  When I walked out of the forest and onto the pebble beach, I was surrounded by an awesome display of Russian flesh – a large number of Russian adults were stretched out on the beach, some wore bathing attire; many did not.  The average weight of those people was pushing 300 pounds.  The rotundity was quite impressive.  Bottles of vodka were everywhere.  Snores filled the air.  This is one of my most lasting memories of Narva :)
Posted by Unknown at (permalink) 4:23 PM No comments:

I'm not too excited one way or the other ... about the Supreme Court decision to uphold subsidies in ObamaCare even in states that use the federal exchange.  Even if the decision had gone the other way, I was confident that the Republican bozo parade would screw things up even worse.  So I was neither particularly surprised by the decision, nor dismayed by it.

But the dissenting opinion (written by Scalia, joined by Alito and Thomas) ... that's another story altogether!  I can't recall another case where any of the opinions were quite this scathing, or so bluntly written.  It's absolutely stuffed with delicious and spicy sections, a few of them laugh-out-loud funny.  It's also as good a summary as I've seen about what's wrong with the court.  If you stop and think hard while you're reading that dissent, and you're not a progressive, it will bring the doom upon you.  It tells the story of America's rot from the top...

The opinion itself is available online.  It's not that long; I read it carefully in just over an hour.  The majority opinion makes me long for a mechanism to impeach the Supreme Court.  If you want to skip directly to the fun stuff, Scalia's dissent starts on page 27 of the PDF.  The Federalist has a good collection of some of the best quotes out of Scalia's dissent.  I'll give you just one example:

I don't think Scalia is very happy about this decision :)


Posted by Unknown at (permalink) 4:08 PM No comments:

Progress in Paradise...  During our walk this morning, the dogs and I got to watch the irrigation crews moving two “wheel lines” – the two that I took photos of yesterday.  To move them, they shut off the water, let it drain out of the pipes, then start up a small gas engine in a special unit located in the approximate center of the wheel line string.  There might be a half mile of pipe on each side of these units, whose purpose is to slowly rotate the line to advance it to a new location.  The entire string of pipe rotates simultaneously, so on a big wheel line you've got about 150 pieces of pipe with a wheel in the middle of each, stretching for over a mile – like a gigantic axle with 150 wheels on it.  The line follows the contours of the ground, and in the hilly area to our east one part of the line might be 100 feet or more above or below another part.  It's quite an amazing thing to see in operation.  It's also an incredibly effective and economically efficient way to irrigate quite large tracts of land.  It was fascinating to watch this crew at work.  In less than a half hour, they moved four of these big strings of wheel line and started them back up.  They zipped back and forth on ATVs to do what needed to be done, a total of six people.

When we finished our walk, my friend and neighbor Tim D. came over to start moving his hand lines.  He's got five of them running at the same time, irrigating the four different fields that he's growing alfalfa in, or using as pasture for his two horses.  He and I got all those lines moved in about 30 minutes, and then I drove my tractor over to his place to borrow his cultivator.

Our tractors both have a Category 1 (the size) 3-point hitch, so we can use the same implements.  By happy coincidence, he and I have a perfectly complimentary set of implements – couldn't have done that better if we'd tried!  I spent about an hour using the cultivator to break up all the ground we'd leveled and graded the day before, to prepare it for planting grass.  Some of that soil was so hard-packed that I had to make a dozen or so passes with the cultivator to get it broken up – but in the end, I was able to make a nice bed of soil for the grass seed.

Naturally, the next thing I did was to seed that area.  I ran down to Tractor Supply Company (just six miles up the road) and picked up a 25 pound bag of forage mix – full sun, low water requirement; perfect.  All I had to broadcast the seed with was a little hand-held and hand-cranked broadcast seeder.  It took a while to get the seed spread on a (roughly) half acre!  My right arm, which did the cranking, is now quite sore :)  And the sun was beating down on me the whole time, 90 degrees or so and 40% relative humidity.  It was hot!  After I got the seed down, I set up a couple of sprinklers.  I'll have to move them a few times to cover the whole area, but in a couple of days I should have that grass seed started.  In a few weeks, we'll have turned what was a complete mess into a nice grassy area that I can mow.  Woo hoo!

Posted by Unknown at (permalink) 3:55 PM No comments:

Scientists make astounding discovery in climate science!  A most surprising one, too: the sun's output can affect our weather.  Who would ever have guessed this?

Other than anyone with even the slightest amount of common sense, that is...
Posted by Unknown at (permalink) 3:36 PM No comments:

Just when my despair was receding...

Just when my despair was receding ... I had to go and watch this video.

Doom.  The doom is upon us, I tell you.  Run for your lives!
Posted by Unknown at (permalink) 3:33 PM No comments:

“I identify as competent.”

“I identify as competent.”  Remy does it again...
Posted by Unknown at (permalink) 12:11 PM No comments: