Evening in Paradise...  Our new routine in the evening is to let Mo'i out into “his” backyard for him to amble at his own pace, while Miki, Race, and I take off for a somewhat brisker – and much longer – walk to the east.  We walked just over a mile each way tonight.  Walking away from home, uphill, the dogs wanted to go fast as hell.  Coming home, downhill, they were content with a much more leisurely pace.  That's of course exactly backwards from what I'd like to do.  Not that they would care.  Just look at these completely unrepentant faces! 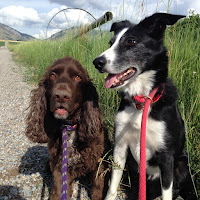 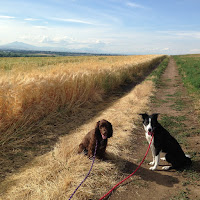 Posted by Unknown at (permalink) 5:27 PM No comments:

Quotes on the Internet... 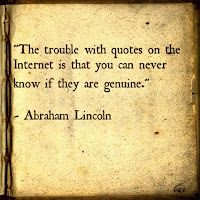 Quotes on the Internet...  Via reader Simi L.  Hah!


Posted by Unknown at (permalink) 5:20 PM No comments:

On the other hand...

Any twinge of hopefulness I was feeling today...

Any twinge of hopefulness I was feeling today ... was completely destroyed by reading this story.

The average IQ is 100 (because definition).  I'm fairly certain that at least one of our dogs (Miki) has above human-average IQ.  That's not a good message about humanity, even though Miki is a pretty darned smart little dog.

His latest demonstration of high IQ?  A few days ago I walked upstairs in our house, while the dogs were all kept in the kitchen by a doggie gate.  Or so I thought – but as I sat down in my office chair, I discovered Miki, tail wagging furiously with happiness.  He curled up by my feet and stayed there for an hour or so.  Then I went back downstairs with him, and discovered that the gate was closed.  The gate is too tall for him to jump over.  How the heck did he get out of the kitchen?

A couple of days (and escapes) later, I caught him in the act.  The clever little guy figured out that he could jump onto a kitchen chair, walk across the kitchen table, jump over to a little table we have near the gate, and then leap over the gate.  That first chair is a good 10' from the gate.  Somehow he figured all this out.  I've employed people who wouldn't have been able to do that :)
Posted by Unknown at (permalink) 12:55 PM No comments:

Many scientists are waking up to the fraud that is Big Climate Change...

Many scientists are waking up to the fraud that is Big Climate Change...  Here's one more...
Posted by Unknown at (permalink) 12:37 PM No comments:

Is there any hope?

Is there any hope?  Maybe not.  Just FYI: silver is going for about $15 an ounce on the spot market today...
Posted by Unknown at (permalink) 12:36 PM No comments:

Kozinski on the criminal justice system in the U.S.

Kozinski on the criminal justice system in the U.S.  Awesome!
Posted by Unknown at (permalink) 10:38 AM No comments: Dione, moon of Saturn...  Via APOD, of course.  Taken by the Cassini robotic space probe.  The big dimly lit orb is Saturn itself, and in the upper right you can make out Enceladus.  The “diagonal line” are Saturn's rings, seen edge-on.
Posted by Unknown at (permalink) 10:37 AM No comments:

Morning in Paradise...  We woke a little late for us – around 5:30 am.  I got up and let Mo'i out into our back yard, which he has taken a real liking to.  He now treats it as “his”, as opposed to being some strange new place.  He wanders about, sniffing all the things he can neither see nor hear.  He's have some trouble with the two steps down from the back door, though.  I think I'll have to build him a ramp soon. 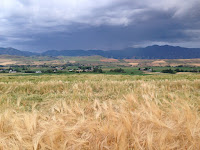 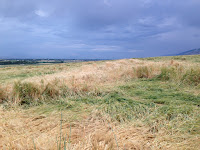 Miki, Race, and I took our usual walk up the dirt road to our east.  We went a bit further than we ever could with Mo'i, about a quarter mile past the abandoned quarry.  That last stretch is almost level, just a track between two fields (barley to the west, alfalfa to the east).  This morning the sky was particularly interesting looking.  Over us were a few scattered clouds, but in all directions around us were storm cells, like those in the photos at right.  The first one is looking north, the second west.  That storm cell in the second photo was headed right for us, and about a half hour after I snapped that photo, it started raining on us – just as our neighbor (Tim D.) and I were laying a string of his hand line, to irrigate his alfalfa.  Thunder and lightning played all around us, but especially up in the mountains – both east and west of us.  It was by far the most dramatic irrigation pipe carrying I've ever done :) 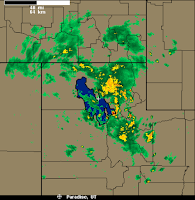 So far we've received 0.7" from this storm – more than forecast, and very welcome.  The radar shows a nice storm cell headed straight for us, too, so we're likely to see more!

I had an appointment this morning Hyrum Tire for routine service on my Tundra pickup.  Despite their business name, that place is far more than a tire store – they do all sorts of maintenance on cars, trucks, and small engines (mowers, weed whackers, etc.).  I walked in, they grabbed my keys and went right to work.  Just forty minutes later, they told me I was all finished.  They did all the usual things, plus checked my timing chain (because I've got 120,000 miles on the original, and Toyota recommends changing at 100,000).  Like Dave in Jamul (our favorite mechanic there), these guys said “Don’t change it; yours is doing fine.”  They even filled my windshield washer.  Total charge: $45.32.  I love living here!  In California my coffee might have cost that much... 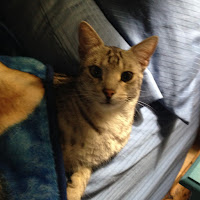 It's raining as I write, and it's in the 50s outside.  My shed will be nice and cool – so I think I'll go do the heavy moving work I've been putting off for a few weeks now :)  Just before I started writing this post, I took a nice photo of Jahar, our Savannah cat that is Debbie's constant companion.  With the cool temperatures of the past few days, he's spending his time all cuddled up with her.  If you know Debbie, then you know she's not objecting to this :)
Posted by Unknown at (permalink) 10:29 AM No comments: