If Your Computer Crashes or Is Stolen... 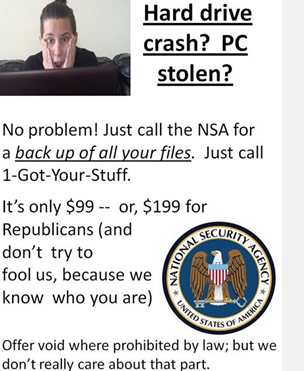 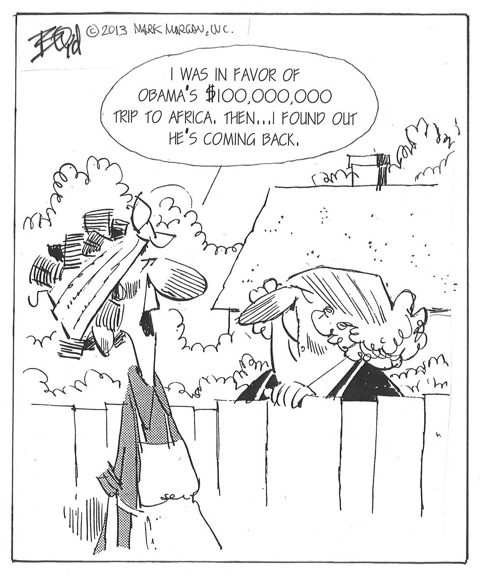 Posted by Unknown at (permalink) 7:55 AM No comments:

By Tam, from View From the Porch:


Oh, beautiful for drone-filled skies
A tax code so arcane!
A voting class on their fat ass
From Houston to Fort Wayne!
America! America!
You voted stuff for free
You made your bed, ye overfed
Go watch some more TV!

I don't think she's celebrating Independence Day, either...
Posted by Unknown at (permalink) 7:53 AM No comments:

These People Are Going to Control Our Healthcare...

Imagine for a moment that you are a magician who performs at churches, schools, and even people's homes.  In one of your acts you employ a rabbit.  It's the only animal you use in your act.  You have no employees.

Sounds like a perfectly innocent small business, doesn't it?  The kind of business that you'd think would be completely free of government regulation and paperwork.

Wait a minute.  You must be thinking that you live in the old America, the one founded by the liberty-loving Founding Fathers.  That's not today's nanny-state America, the one enabled by low information voters.  No, siree!

In today's America, that magician has to file a “disaster plan” for his bunny.  It takes eight pages of bureaucratese just to describe what that disaster plan must contain.

Yes, I'm serious.
Posted by Unknown at (permalink) 7:46 AM No comments:

The news from Egypt has been interesting and sometimes downright exciting over the past few days.  Morsi, the Muslim Brotherhood leader, was leading Egypt down a path toward an Iran-like fundamentalist Islamic republic – and the people of Egypt said (rather loudly) “No!”  If we are to believe the pronouncements of the Egyptian military that enabled Morsi's removal (and their actions are so far consistent), Egypt will get another bite at the apple – they get a “redo” on their constitution, and new elections.  It will be fascinating to see how this plays out over the next six months to a year.

While reading this news, I caught myself having an odd reaction, and it took me a while to figure out what it was.  It was envy, plain and simple.  I'm envious of the chance the Egyptian people have now to rework their government into something more to their liking.

Today is Independence Day here in the U.S., ordinarily a day I would enthusiastically celebrate.  Overeating and too much alcohol might be involved.  I don't feel much like celebrating this year.  The country whose independence I'd celebrate is slipping away, bit by bit.  Another slip happened this week: Obama, acting like the dictator he clearly would like to be, arbitrarily decided to delay enforce a law – he delayed the implementation of Obamacare for large companies.  He is exercising a power that our Constitution does not give him.  Under the Constitution, a president doesn't have the power to simply override a law passed by Congress and signed into law by the president.  Obama is doing it anyway, precisely as any tyrannical dictator would do.  Now perhaps there will be a lawsuit filed to prevent him from actually pulling this off, but in these days of complicity by both political parties, I'm not confident that such a thing will happen.

Why would Obama do this?  A reasonable question, and this one has a clear answer.  It's not the excuse that Obama is giving; that's just political cover.  The real reason is that his fellow Democrats are afraid of getting creamed in the 2014 election cycle – because they're afraid of the electorate's backlash when they find out what Obamacare will cost them once it's implemented.  This is especially true of some key Democratic constituencies: young people and minorities.  When these groups have to start writing the checks to pay for Obamacare, they're not going to be happy campers.

So Obama waves his magical, tyrannical wand...and kicks the problem down the road another two years.

I'm envious of the chance the Egyptians have to adjust their government to something better.  We Americans need that chance.  We need a second Independence Day.  That's an Independence Day I would love to celebrate!
Posted by Unknown at (permalink) 7:37 AM No comments: