Rings around an asteroid...

Rings around an asteroid...  The video at right is via APOD, and shows graphically how astronomers recently discovered the existence of Saturn-like double ring system around the asteroid 10199 Chariklo.  Click on the APOD link for more details.  I particularly like the way a simple photometer, recording a star's brightness when Chariklo occulted it, provided solid evidence for the rings...
Posted by Unknown at (permalink) 7:12 AM No comments: 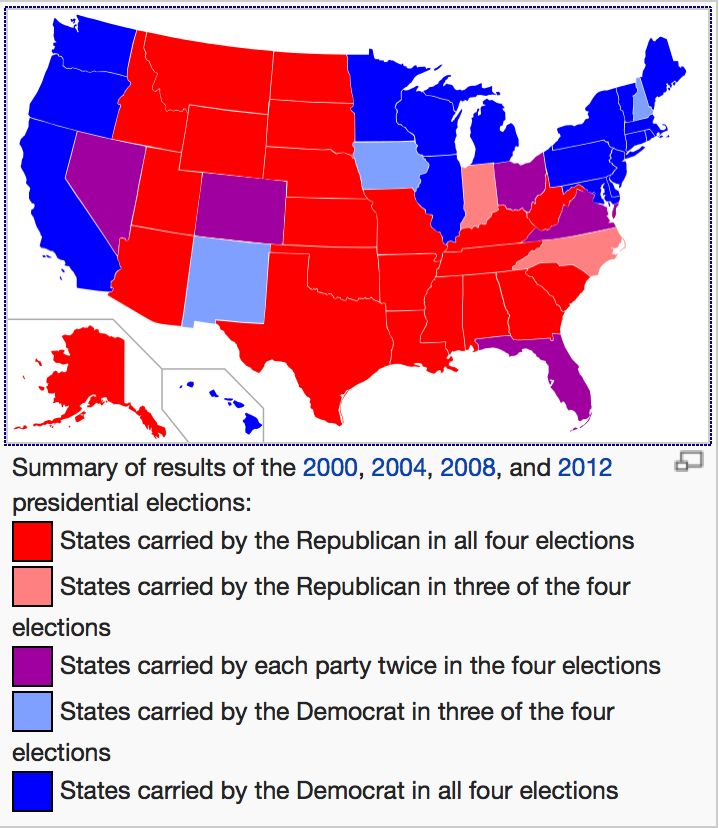 Red and blue states...  I stumbled across this map (click to embiggen) in my morning reading.  It's worth studying, as it shows just how polarized American politics are becoming.  Forty of the fifty states have voted for presidents from the same party in the last four presidential elections.

Analyzing this sort of thing is complicated, as the Wikipedia article linked above describes (well worth a read).  Nevertheless, the map at right is describing something quite real.

It's perceptible on the ground, too – I am surprised on almost a daily basis by the unobtrusiveness of government here in northern Utah as compared with southern California.  I'm absorbing something else, too: the residents of southern California, generally speaking, would think the idea of an armed revolution in the U.S. is crazy and highly unlikely.  Here in northern Utah, the idea of another armed revolution is mainstream – and seriously discussed as a solution to the problem of America's slide toward socialism...

There are two Americas, though not quite in John Edward's sense...
Posted by Unknown at (permalink) 7:07 AM 2 comments:

“…a more lawless and violent place.”

“…a more lawless and violent place.”  David Rivkin and Lee Casey are a couple of cold warriors from the Reagan and H. W. Bush era.  They're not happy with That One's handling of foreign affairs, most especially with respect to Putin.  They've got an opinion piece in today's Wall Street Journal laying out the argument for a more robust, less milquetoast response by the West.  Their conclusion:


More than arcane legal principles are at stake. Western failure to champion a narrative of international rights and wrongs, rooted in the language of law and legitimacy, would be tragic. Meeting Russia's aggression with passivity undermines already weakened domestic support for a robust and engaged foreign policy in the U.S. and other Western countries, and it promises to make the world a more lawless and violent place.

A companion piece from the editorial board explores the issue further.

I'm afraid this isn't likely to change so long as That One is in the Oval Office...
Posted by Unknown at (permalink) 6:54 AM No comments:

Gasoline from seawater?  That's the gist of the announcement by the Naval Research Laboratory (NRL), and it's not an April Fool's joke.  However, it's also not at all like the urban legend about the magic pill that turns a gallon of water into a gallon of gas.  What the NRL has come up with is a process that scavenges almost a pound of carbon dioxide from each gallon of seawater.  The process also extracts hydrogen, which when combined catalytically with carbon dioxide yields carbohydrate fuels such as gasoline.

Right now it's a lab demonstration.  If the NRL can reduce this to something practical on board a ship (and they have a surprisingly good track record of doing that sort of thing), it raises the possibility of ships that refuel themselves from stuff found in ordinary seawater.  Moreover, this would be “carbon-neutral”, making the greenies very happy.  I'm sure they'll find some reason to hate it, but by their current standards they really should love it...
Posted by Unknown at (permalink) 6:46 AM No comments:

Your morning Thai palate cleanser...  Via my lovely bride...
Posted by Unknown at (permalink) 6:29 AM No comments:

Big day at the new house today!  Our washer and dryer are arriving, and just in the nick of time: my dirty clothes pile is alarmingly large :)
Posted by Unknown at (permalink) 6:28 AM No comments: