Paradise ponders: first mowing edition...  Yesterday I fought the battle of the lawnmower.  Successfully, too – not long before dark I actually finished mowing our yard.  But it was not easy getting to that point!

First, all four tires were flat.  I lugged my little air compressor out to the shed where I kept the lawnmower over winter, and soon that problem was fixed.  It must be a slow leak, because this morning they all still look good.  Then I tried to start the mower, but the battery was dead.  So I jump-started the mower with Debbie's car and some jumper cables, and it started right up.  Ran it for fifteen minutes, turned it off, and tried to start it again.  It was deader than a door-nail.  Sigh.  Dead battery (two and a half years old, and frozen over winter – so fair enough).  Ran to NAPA and bought a new battery (and had fun with the staff there who wanted to see the Model X).  Ran back home, threw in the battery, and zoom – off we went.

Engaged the mower blade and there was a horrendous bang! and the sound of an unloaded gas engine.  Some quick inspection and I found that the main drive belt had broken.  Off to the local hardware store, where I found – amazingly! – precisely the belt I needed.  Back home, disassemble half the mower, install the new belt, put the mower back together, discover two parts left over.  Disassemble the mower again, find the place for those two parts, put it all back together, and off we go.

About half the yard later, I notice that the grass is no longer being mowed on the left side of my path with the mower.  The mower has two blades under the deck, so the left blade must have a problem.  Start investigating, and in the process I put my right index finger on the drive pulley for that left blade.  I hear a loud ssssss and I smell cooking meat.  My finger!  The pulley is so hot it almost glows.  A little more investigation – very carefully! – and I discover that the pulley is slightly loose on it's shaft.  It's held on by a simple nut, so I just need to tighten it, I think.  No problem!  I dig through my socket wrenches (the only kind of wrench that would work on this recessed nut) and discover that the nut is bigger than the biggest socket I own.  I mike it, and find that it's 7/8".  My biggest socket is 3/4".  Sigh.  Off to the hardware store I go, to buy a bigger socket.  They don't sell 7/8" sockets for 3/8" drive wrenches, which is what I have.  Sigh.  So I buy a Craftsman 1/2" drive socket set, and now I have sockets from 3/4" to 1 1/2".  Back home I go.  One quarter turn of the wrench later, the pulley is tight again.

Back out to the lawn, and I finished the rest of it without incident.  But now I wonder what will happen to me when I try to mow next week!

Afterwards Debbie and I wandered up to Aggie's Creamery to get an ice cream cone.  When I came back to the car with our cones, a young man (who had been lounging with another young man) ran over and asked me how I open the door.  I explained to him that the car sensed my fob and opened itself as I approached, but what he really wanted to know was how the door handle worked.  So I explained how you just push it to open the door.  The two young men were clearly delighted by seeing a Tesla, and Debbie was laughing about that.  Then she started opening the falcon wing doors and the trunk just to get a reaction from them, which she most certainly did.  Lots of fun!  :)
Posted by Unknown at (permalink) 7:43 AM 1 comment:

It's not just American history we don't know... 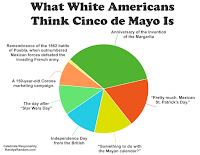 It's not just American history we don't know...  We're just as ignorant about Mexican history!  Click image at right to embiggen.  Hint: the tiny sliver of yellow is the correct answer.


Posted by Unknown at (permalink) 7:24 AM No comments: