What the fashionable young men will be wearing...

What the fashionable young men will be wearing...  At least, according to London's Fashion Week.

Judging from some of the comments there, many folks are surprised to see this.  I see it as a natural, predictable result of the feminization of Western society.

Ugh.  Now wait for a moment while I go take a shower and take an emergency dose of Cabernet...
Posted by Unknown at (permalink) 3:44 PM No comments:

What kind of food has all this junk in it?

What kind of food has all this junk in it? 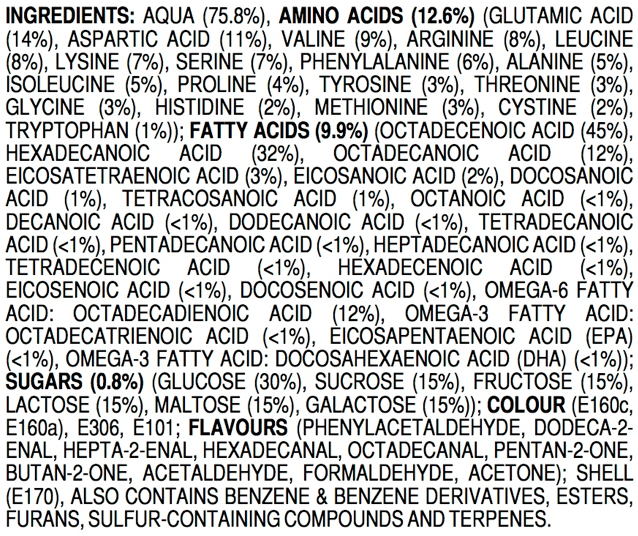 An egg, that's what.  A plain old ordinary egg.  Lots more on his blog.

Reminds me of the dihydrogen monoxide scares (see here for much more)...
Posted by Unknown at (permalink) 2:55 PM No comments:

I don't know the story behind this... I don't know the story behind this...  But the results are awesome.  More photos like this at the photographer's Imgur site, and some discussion on his blog...
Posted by Unknown at (permalink) 2:47 PM No comments:


(2014-01-20) — In a holiday ceremony to commemorate the life of the Rev. Dr. Martin Luther King, Jr., President Obama spoke of the “fairly significant role” Dr. King played in the run up to his own historic presidency, but humbly downplayed potential talk of an Obama national holiday.

Sounds ... completely plausible, doesn't it?  But it's ScrappleFace...
Posted by Unknown at (permalink) 2:44 PM No comments:

Rosetta is awake!  After almost three years of hibernation, the Rosetta spacecraft today woke itself up and reported back to Earth.  The mission's controllers (photo at right) were rather happy about that :)

It will likely be a few days before the controllers have determined Rosetta's state of health, but ... an awful lot of things had to work correctly simply to get the signal they got, right on time, this morning.  There's every reason to be optimistic about the spacecraft's status...
Posted by Unknown at (permalink) 2:41 PM No comments:

Class warfare in San Francisco?  The Googlers and their ilk are raising the cost of living in San Francisco, and the natives don't like it very much...
Posted by Unknown at (permalink) 7:56 AM 1 comment:

An open source, free hike information site...  This has promise, but it needs a lot more content to be very useful...
Posted by Unknown at (permalink) 7:55 AM No comments:

Amazon gets even more awesome...

Amazon gets even more awesome...  Now they're talking about starting the process of delivering a package before you order it!  They've filed for a patent on the idea of using your past orders – or even your searches – to predict that you're going to buy something, and then they preemptively ship to your area so that delivery would be faster than you expect.

We've already noticed some things getting delivered far faster than we'd think possible, and some of those things are repeat orders for us.  Most recently I noticed this with my tea order.  I've been buying the same tea now for several years; a kilogram about every 10 weeks.  The last time I ordered it was just a couple of weeks ago, and the tea arrived the day after I ordered it – and considering that we live out in the San Diego mountains, that's pretty amazing...
Posted by Unknown at (permalink) 7:53 AM No comments:

A Texan speaks out...

A Texan speaks out...  Click to embiggen...
Posted by Unknown at (permalink) 7:49 AM No comments:

Shudankodo...  This is a kind of formal synchronized walking, and apparently it's been popular in Japan since 1966.  Search Google for “Shudankodo” or “Japanese synchronized walking” to learn more than you ever wanted to know about it.  If you like this video, there are thousands more like it on YouTube.

I ran across this by accident in my reading this morning, and it reminded me (once again) of the enormous difference a culture makes.  I cannot imagine sitting in a stadium watching something like this for more than about 20 seconds before being bored to the point of tears.  In Japan, there are avid followers of this event that compete for the limited number of tickets available in the arenas where its performed...
Posted by Unknown at (permalink) 7:45 AM No comments:

WWII monument...  This is in the Netherlands, and they made it by taking a slice right out of the center of a Nazi bunker.  This site has lots more details, and a video of how they did it.

My US Navy and business travels took me to a lot of places in the world.  I spent quite a bit of time in eastern Europe, and also in southeast Asia.  One constant, virtually everywhere I went, was the presence of abandoned WWII construction.  Most of these leftovers weren't so much monuments as they were expensive and inconvenient to remove – so they just stayed there.  In the Philippines, Thailand, Russia, Estonia, Latvia, Finland, Australia, and Slovenia I ran across these derelicts as I traveled through the countryside.  In Estonia, in the '90s and '00s, I actually sought some of them out.  In some cases friends told me about them.  In other cases, books I'd read about WWII told me the locations, and I'd find them with my GPS and the aid of locals.  On Saaremaa (an island in the Baltic Sea that's part of Estonia), I've spent several days exploring WWII fortifications used by both sides to defend the Gulf of Riga.  In Russia, I spent a day exploring the area where the Nazis built a huge gun emplacement to attack St. Petersburg (then Leningrad).  In the Philippines, I spent two days on Corregidor Island, exploring its huge fortifications where the American defenders surrendered to Japanese attackers.  All of this brought home to me just how lucky America has been in the absence of combat on its shores – this sort of war memorial is almost non-existent on our territory (with the USS Arizona monument being a glaring exception).

However, there's another factor at work, too.  Some countries have actively removed most traces of WWII.  This includes America – we built huge numbers of shore defense bunkers and fortifications, as well as submarine and aircraft watch towers (many of reinforced concrete), and virtually all of these have been demolished.  In the U.K., there was even more such construction – and very little of it remains today.  France, Germany, and Italy have removed much of their WWII fortifications, though some has been carefully preserved.  In Estonia, one might stumble upon some WWII remnant anywhere you travel, sometimes in the most unexpected places.  So to some extent, the preservation of the WWII constructions seems to be a function of culture, or perhaps a country's wealth...
Posted by Unknown at (permalink) 7:39 AM No comments:

The wrong side of the door... The wrong side of the door...  Mo'i is our oldest male field spaniel.  That's him at right, back in his days as an agility competitor, in 2006.  He's getting old now, and spends most of his time sleeping and eating.  I'm not sure which of those two activities he likes the most :)  And of course, like any dog, he likes his walks.

About a year and a half ago, I replaced the patio door that we normally use to go in and out of our house.  The old door was a sliding glass door.  From the inside of the house, you would slide the door from right to left to open it.  When they figured out that we were going for a walk, the dogs would all jostle for position at the right hand side of that door, eager to be the first out.  They have no idea why they want to be first, mind you – but they're dogs, and they know it's important to be first :)

I replaced that door with one that had a pair of hinged doors, rather than a sliding door.  The doors open from the center, so the right place for the dogs to congregate is at the center of the door, rather than at the right side.  This confused all the dogs at first, but within a few days they figured out the new door, and went to the middle.

Except for Mo'i.  A year and a half after I replaced the door, he's still going to the right side, convinced that the other three dogs are all crazy and that he'll be the first one out.  Every day, 3 or 4 times a day, we go through this drill: three dogs in the middle, and Mo'i on the right.  I open the door, and now there's a door between Mo'i and the opening.  Every time, he has to awkwardly back up, move to his left, and join the other dogs – the last one out the door.  He's done this roughly 2,000 times now, and he still doesn't understand that the center is the place to be.

When he was competing in agility, he earned the moniker “Slo-Mo” for his unhurried pace through the course.  I think we could use that for his learning speed, too :)