Remember this winter when a photograph of a New York City cop who bought a $100 pair of boots for a homeless guy went viral?  The cop was (appropriately) lauded, and everybody felt great about it.  Barefoot in the winter, the homeless guy was now well-equipped.

The “homeless guy” was a fake.  The cop didn't know it, but this guy was running a scam, pretending to be a homeless guy while raking in over $100k tax-free dollars a year from generous New Yorkers.  He also has dozens of pairs of shoes donated by Good Samaritans like the cop, all stored in his (rather nice) apartment.

This was a simple modification, exchanging the factory alloy wheels (vulnerable to shattering if smacked hard on a rock) and street tires for steel wheels and offroad tires.  We got these wheels and these tires, and we're quite happy with both.  The puncture-resistant Kevlar sidewalls and tread design are a perfect combination for what we're going to be doing offroad, and the silica rubber is superior on wet surfaces.
Posted by Unknown at (permalink) 9:22 AM No comments: 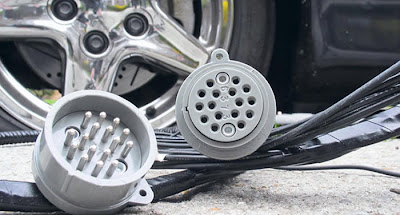 Yesterday I finished the most difficult modification I've done yet: installation of a Ravelco theft prevention device (photo at right).  If you've never heard of Ravelco, don't feel bad – I'd never heard of it either until very recently.

For years now, I've known that automobile burglar alarms were almost completely ineffective as a theft deterrent.  Insurance companies keep wonderful statistics on such things, and these statistics don't lie: cars equipped with burglar alarms are actually more likely to be stolen than those without.  The actuaries are certain that counter-intuitive result is a sampling bias problem – desirable cars are (of course!) more likely to have a burglar alarm installed.  But here's the statistic that tells you burglar alarms don't work: there is no statistically significant difference between the theft rates for any particular car model and year for those with or without burglar alarms.  None. Zip. Nada.

So how do you keep your car from being stolen?  LoJack will help you recover it once it has been stolen, but what if you'd like to avoid the theft in the first place?  Currently the best theft deterrents are “immobilizers” – devices that keep a thief from operating your car.  Immobilizers won't stop a really determined thief who loads your ride onto a tow truck and makes off with it, but they will stop the more typical thief who's going to hot-wire the ignition and drive away.

Immobilizers work by disabling some vital part of your car's electronics, most commonly some combination of starter motor, ignition, fuel pump, fuel injectors, or automatic transmission control.  Nearly all immobilizers are wired under the dashboard, which makes them vulnerable to a knowledgeable thief who wants to disable them.  YouTube and many web sites have videos that teach you how to hot-wire immobilizer-equipped cars, with examples from many makes and models (especially the factory-supplied immobilizers).  Clever people figure out the method, then people with questionable motivations publish the videos showing the techniques.  Yikes!

The Ravelco folks had a very simple idea about how to make a more effective “kill switch”.  Then they added some clever bits to make it harder to defeat.  The result is a ridiculously simple device, with nothing to go wrong, that's remarkably hard to defeat.  It's also hard to install :)

The simple idea is this: the Ravelco socket (at right, above) is installed somewhere inside your car.  In my case I installed it in a hidden location that's very easy to get to.  That socket has 16 pins, but only five of them are connected to the five wires that extend from the back of the socket: two pairs and a ground wire.  The Ravelco plug (at left, above) has a matching set of 16 pins, but only four pins are wired up (two pairs of pins are wired together).  Both the socket and the plug have their wiring embedded in the hard molded plastic; you can't look at it to see which wires are wired to which pins.

Each of the pairs of wires is connected to some vital electronic system in such a way that when the plug is removed that electronic system is disabled.  In my case I wired them into the ignition power circuit and the fuel injector power circuit.  With the plug removed, you can crank the engine over but it won't start: there's no fuel and there's no spark.  With the plug installed, the fuel injectors and ignition gets power, and the car runs fine.

If a thief is faced with the empty Ravelco socket and wants to make a brute force attack, here's what he's up against.  If you do the math, there are over a half million permutations of the wiring arrangement.  Every Ravelco is wired differently, so the thief, on average, would have to try a quarter million different jumper arrangements before he found the one that worked.  It's actually not quite that good, as the pin connected to ground can be found easily with an ohmmeter, but still the thief would need to try over 100,000 jumper arrangements.  Each jumper arrangement would take at least 5 seconds to insert and test - so we're talking about almost a week of 24-hour-a-day testing to find the answer.  Brute force isn't going to work :)

Here's where the extra clever bits on the Ravelco come into play.  First, the wires coming out the back of the plug are inside a flexible steel sheath, which extends all the way to the firewall (where the wires go through a hole into the engine compartment).  It would be very difficult indeed for a thief working inside your car to extract those wires and try shorting various wires together.  With just five wires, the number of combinations to test is considerable smaller: just ten.

So the thief would have to open your engine compartment, find the right wires (if you've ever looked inside a modern engine, you know that even that step is challenging – there are a lot of wires in there!), and then try shorting them together in various combinations.  However, there's a problem there: some combinations are likely to blow a fuse.  Once you blow the fuse, none of the combinations will work.  So to maximize his chances of success, the thief needs to follow those wires to their destination so he can figure out on the first try which wires need to be shorted together.

Ravelco goes to great lengths to tell you to hide those wires deep inside big cable harnesses.  That's what makes it difficult to install, but it also adds a tremendous degree of difficulty for the thief.  In my case the wires are buried inside three feet of cable harness, traversing four junctions in the process.  The thief would have no choice but to laboriously follow those wires to where they connect with factory wires, all without interrupting any other wires.  With all the right tools and perfect knowledge, I'd guess that would take about an hour.  What thief would work under the hood of your car for an hour?

Simple idea, clever implementation.  I recommend it.  Ravelco's business arrangements are clever, too.  Usually it costs $500 to $750 to get a Ravelco installed.  There are about $10 worth of parts in it, so that's a lot of profit margin!  The reason they can maintain this is that they won't sell you the parts directly – only dealers can buy the parts, and the dealers are contractually obligated to provide the Ravelco installed.  That installation is where they make their money.  I was lucky enough to find a brand-new Ravelco on eBay.  I bought it from some enterprising fellow who bought the assets of a failed Ravelco dealer, including his inventory of brand-new Ravelcos.  As I write this, there are still quite a few available.  I paid $50, and then was able to make an installation the way I wanted to, with the maximum amount of buried wires.  I've read stories of much poorer dealer installations; they, of course, are motivated to reduce the time they spend on the installation.
Posted by Unknown at (permalink) 9:17 AM 1 comment: