This is just disgusting, and un-American.  The nanny state is alive and well...
Posted by Unknown at (permalink) 8:21 AM 1 comment:

More on the Intrade Crackdown...

The Wall Street Journal agrees with me: the crackdown on Intrade is gross regulatory overreach.
Posted by Unknown at (permalink) 8:19 AM No comments:

Scary Story...But With a Happy Ending...

Mo'i is our second-oldest dog – a male field spaniel who has been part of our lives for fourteen years.  He's a quiet, affectionate, and unflappable fellow.  The one thing that gets him excited is food – anything he can force into his mouth and swallow makes him happy.  We're not even sure what his favorite food is.  He likes dog food, but he also likes tomatoes, onions, bananas, banana peels, and even...gravel.  Yes, really – gravel.  A couple times a year, while we're walking him, he'll go over to our little gravel pile and grab a mouthful of pea gravel and swallow it.

Mo'i has had more than his share of health issues.  A few years ago, he had a splinter of bone fragment pressing against his spinal cord; that required some fancy surgery to fix.  Unusually for a dog, he has high blood pressure (hypertension).  More recently he's been struggling with skin problems (bacterial and fungal infections) that make him itch all over and smell funky.  The last few weeks he's had a couple of “hot spots” where he's licked and bitten the hair off a patch of skin, so we've had him wearing the “cone of shame” to keep him from further injuring himself.

But through all these travails, there's been one constant: put food down, and Mo'i is all over it.  When he figures out that we're about to feed them, Mo'i starts whimpering and even trembling in anticipation.  At moments like that, all thought of his pain or discomfort go flying out the window, and Mo'i is all about one thing: food, food, food, FOOD!

So yesterday afternoon (at 3 pm) when I fed the dogs and Mo'i was completely disinterested, I knew something was badly wrong.  That had, quite literally, never happened before – not in his entire life.  There were a couple of other less alarming symptoms as well: he was listless, held his back slightly arched, and had is little stub of a tail held level and trembling – all odd for him.  Debbie called our local vet; she was not in the office but another vet was covering for her, so Mo'i and I jumped in my car and away we went.

Before 4 pm the vet was examining Mo'i.  The only thing clearly wrong that he saw were his bright red gums – something possibly associated with Mo'i's hypertension.  With nothing else to go on, the vet thought that Mo'i's symptoms were most likely caused by something related to his hypertension, and quite likely not something acute.  Our local vet doesn't have the specialized sphygmomanometer needed for dogs, so he thought it might be a good idea to take Mo'i to the Animal ER in Kearny Mesa (40 miles or so away) where they did have a sphygmomanometer to get that blood pressure checked.  He didn't think it was urgently necessary to take Mo'i up, and waiting until Monday would probably be ok as well.

Ordinarily this is the sort of thing that Debbie and I would decide together, as she'd be right there with me.  But with Debbie laid up with her busted-up knee, I was down at the vet's on my own.  It's the kind of tradeoff decision that pet owners agonize over – do we put our pet through the low-grade trauma of further tests and travel, spend the money and time?  Is it actually necessary?  Vets (like doctors) generally don't give clear-cut advice in such matters, but the vibes I was getting from this vet were “this isn't all that urgent”.  On the other hand, the fact that Mo'i wouldn't eat was really sticking in my head – knowing Mo'i, that felt like a loud scream for help.

So I decided to take him to Animal ER.  Mo'i and I loaded ourselves back into our ancient LandCruiser, I gassed up, and away we went.  Animal ER didn't even open until 6 pm, so I thought I had plenty of time to get there – but it was raining, and the San Diego freeways were slick, and the traffic was horrible.  I didn't make it up there until just before 6 pm. 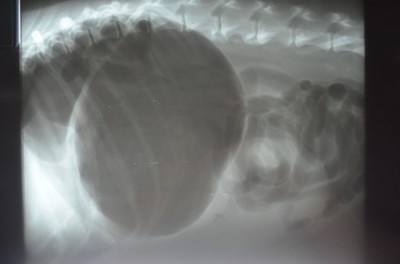 In very short order, Mo'i was being examined by Dr. Keith Ray at the Animal ER.  He recommended X-rays, and ten minutes later he was going over the electronic results with me.  There was a very clear diagnosis, and it had nothing whatsoever to do with his blood pressure: Mo'i was suffering from gastric volvulus, causing his stomach to blow up like a balloon.  The X-ray at right isn't of Mo'i, but it is very similar to his.  There are lots more details at the link, but basically his stomach had spun on its lengthwise axis about 2/3 of a turn.  This caused both ends of his stomach to be sealed shut, and it immediately started inflating from digestive gases.  If untreated, it's fatal – and quickly.  The mortality rate for diagnosed dogs is around 50%.  The sufferer is in agony.

The treatment is surgical, and Dr. Ray is experienced in this particular surgery.  He told me very frankly about the risks, which are significant.  The two biggest risks: necrosis (dead tissue) of the stomach (caused by blood vessels being twisted shut) and loss of the spleen (again, from loss of blood supply).  The first problem could cause anything from complications to death; the second could cause complications and increased risk of post-operative infections.  He recommended immediate surgery (the only real alternative was to euthanise him), and by 7:30 pm Mo'i was being prepped for surgery.  I had a chance to spend a bit of quality time with him as the tranquilizer was taking hold, but then it was off to the operating room for the Mo'i.

I drove back home to explain all this to Debbie, and to wait with her for the surgeon's call.  There was nothing either of us could do at the Animal ER; we couldn't even be with Mo'i.  So, feeling very helpless and very worried, we waited.  Finally, a bit before midnight, we got the call from Dr. Ray: the surgery had gone very well.  There was no stomach necrosis at all, and the spleen was fine.  Dr. Ray suspects that Mo'i's hypertension actually helped in this situation, by forcing blood through the constrained blood vessels.  Mo'i was fine, and his stomach was back in the right place, tacked down to a rib so it doesn't happen again, and the trapped gases were all released.  We've heard this morning that Mo'i is recovering just fine; he's been up for a little walk and he's behaving like the dog he is.  Hopefully we'll be able to bring him home tomorrow, where he'll be getting a bit of extra attention.  And maybe a banana, if the vet permits...
Posted by Unknown at (permalink) 8:15 AM No comments: