Paradise ponders...  It's now been two weeks since Debbie was hurt during physical therapy.  I'm happy to report that she's doing much better now than immediately following that little setback.  She was making steady progress up until last Friday, though slower than she was happy with.  On Friday she saw a knee specialist, and he concluded (after X-rays and an exam, and after hearing of her slow, steady progress post-incident) that she had most likely broken through scar tissue in that incident – that's the best possible explanation, so we were very happy to hear that.  He recommended cortisone injections for both knees, something that Debbie was very hesitant about (who actually likes the idea of a 2" needle being shoved into their knee joint?) but finally agreed to do.  It was actually much less painful than she was anticipating, thankfully.  The doc predicted that it would hurt like hell on Saturday, but be better on Monday than it was on Friday – and that was exactly what happened.  Furthermore, he cleared her for physical therapy starting Monday, and we did that yesterday afternoon.  She was up and walking on the anti-gravity treadmill again, and her gait actually looked better than before the incident.  Today she starts back on her bicycle and treadmill exercise program.  In the end, she may look back to the incident two weeks ago as actually a breakthrough in her recovery from the surgery in May.  It's too soon to know that for sure yet, but it's looking hopeful... 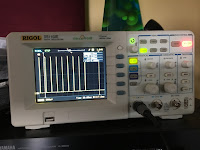 I mentioned a while ago that an old Navy buddy of mine (Mike B.) and I are collaborating on building a piece of automated woodworking equipment.  Exactly what we're building is still evolving, but it looks like we're going to end up with a 3-axis (XYZ) woodworking mill, with both a clamp and a vacuum table to hold pieces we're working on.  My end of things in this collaboration is the electronic hardware and software.  The only decision we've made so far on that front is to use a Raspberry Pi computer (which has a Debian Linux OS) running software written in Java and JavaScript (which are the languages I know best).  To that end, I recently bought a Raspberry Pi, got it running, and starting writing software for it.  I'm using an open source library called Pi4J that provides a nice JNI wrapper for all the Raspberry Pi's hardware.  Much to my surprise, that part all worked on the very first try!  Now I'm working on a little bit of simple test software, mainly to learn the environment.  It just controls a couple of LEDs wired up to bits on the Raspberry Pi's GPIO header.  It's been a great deal of fun for me to jump into this sort of thing again.  It's the first embedded system I've worked on for a long time (though it's an embedded system with a keyboard and a color touch screen!), and (literally) twiddling bits in Java has also been fun.  I am controlling the LEDs' brightness by pulse-width modulation, real low-level sorts of things that I haven't done for ages.  And this all gave me a great excuse to break out my 'scope (above right) for troubleshooting.  Lots of fun!

In the afternoon yesterday, after Debbie's physical therapy, we stopped at Aggie's for huckleberry ice cream cones, then headed down to Porcupine Reservoir to have a drive through the autumn scenery.  There was lots of quietly pretty stuff to gawk at, but one swath of bright red on a hillside just west of the reservoir topped them all: 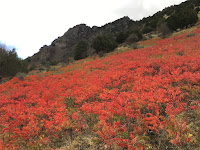 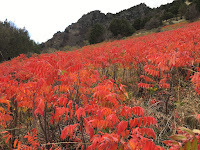 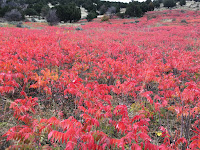 I have no idea what that plant is, but it's got fall color to beat the band!

Posted by Unknown at (permalink) 6:37 AM No comments: