Some detail on the office wiring project...

Some detail on the office wiring project...  As requested by reader John L., who wondered how I was wiring up those power strips.  The power strips came with a 6 foot long 14 gauge power cord, terminated in a molded plug.  When I took the cover off of one, I discovered that the power cord was machine-crimped solidly into internal bus bars.  Since I needed longer (much longer!) power cords, I cut the power cords off, leaving a short stub.  Then I used crimp butt connectors (first photo) to patch in a piece of 12 gauge service cable (heavy duty, flexible power cord) cut to the right length to plug into the outlets I installed (third photo).  I covered the connection with a piece of heat shrink (second photo).  The outlets are fed from the circuit breaker panel with 10 gauge solid Romex in plastic conduit.  The last photo shows the result along one wall; the others are made the same way.

All of the outlet strips are mounted 24" off the floor, where they'll be completely hidden under the workbenches, tables, and desks I'll be putting up.

The ceiling fan will be in the very center of the room.  This afternoon I bought a special electrical box designed for installation through an existing ceiling, through a hole just big enough to fit the box.  It uses a pair of extensible brackets to fasten itself into to adjacent joists in the ceiling.  In the case of my office, those will actually be the bottoms of factory-made roof trusses, mounted on 16" centers.  The ceiling of my office has about 18" of blown-in insulation on top of it, so I'll be poking a piece of Romex through the ceiling hole and threading it through nine trusses to get it to a wall where I can supply power.  That oughtta be fun!  I think I'll enlist Debbie's help to guide me on that one :) 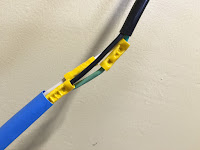 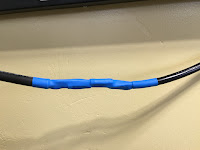 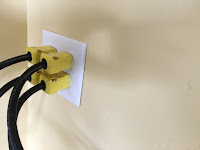 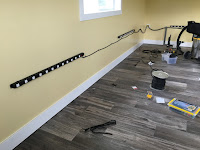 Posted by Unknown at (permalink) 6:17 PM No comments:

Paradise ponders...  It was a busy day today, with lots of different things competing for attention.  In between other things I managed to get some work done on my office wiring, but I didn't finish today as I expected to.

One of the interruptions today was from Amazon, telling me that the ceiling fan I'd ordered for my office will be here tomorrow, instead of the end of next week.  Woo hoo!  More wiring!  There is good news there, though: now I can do all the really messy work before I start actually moving my stuff into the new office.  But I also had to make a run to Lowe's, to get the parts I'd need to wire up that ceiling fan :)

Another interruption today was very welcome: our builder (Jim J., the same fellow who built my shed) came over to go over the plans for the changes we're making to the house.  He's getting ready to pull a permit, and once he has that he's going to start working.  It's going to be a mess around the house for a while once that starts!  Demolition of old concrete, on all three construction areas (mud room, sun room, and patio), is the first step.  Big mess!

Then came a call from Darren N., who works for Thomas Petroleum.  I'd told him last year of my interest in getting a tank for diesel and for gasoline.  He called to let me know that they've just gotten a bunch of used 500 gallon tanks in, rugged outdoor tanks with high stands – perfect for gravity fed fueling of my tractor, our cars, etc.  These things were being used in the oil industry to support field operations, but with the tumble in oil prices the oil companies cut way back on field operations and sold off a bunch of stuff – including these tanks.  They're a steal at the price on offer: $500 refurbished, delivered, and installed – including a hose and filler nozzle.  I ordered two for us.  That means that we'll be able to have a supply of tax-free diesel on hand for my tractor, and regular gasoline for all our vehicles and other equipment.  One more little piece of self-sufficiency!

Early this afternoon Gerald (the fellow who does annual maintenance for Golden Spike Electric) came out to do the annual maintenance on our backup generators.  As we're starting to expect out here, he's a really nice fellow – and competent, vastly experienced, and conscientious about his work.  I had an enjoyable conversation with him about his experiences, especially as a Mormon missionary in Barcelona, Spain.  That was about 40 years ago, but it's still fresh in his mind; a formative experience for him.

While working in my new office this morning, I got kind of cold, as it was only in the low 40s.  So I started a fire in the wood stove I had installed last fall – that's the first time I'd tried it out.  All was fine until the stove started to get hot, and then all of a sudden the new paint on the exterior started giving off some really obnoxious fumes.  They warn you about these fumes in the manual, saying that some people might find them unpleasant.  That's about like saying that some people might find having their legs run over by a bulldozer unpleasant!  Those fumes had me running from the room in fear for my life from poisonous fumes.  I held my breath and went back in to open all the windows wide, then evacuated for an hour until the fumes had cleared.  Oh, they were awful!  I hope that phase of this stove's life is over quickly!  It did warm up the room nicely, though :)

Debbie and I went out to Angie's for a nice late lunch.  We both had the cod fish fry, and chicken noodle soup.  Wonderful, as always, it was...
Posted by Unknown at (permalink) 4:13 PM No comments: