Progress in Paradise...  Had Michelle H. over again this morning (and she'll be here this evening as well) for final training on how to take care of our animals.  Tim and I moved a couple strings of his hand line, to water the last bit of his alfalfa field.  I got a second topcoat on my trailer bed, and tomorrow morning Tim will come over and help me mount it on the chassis.  I mowed the rest of our lawn, about an acre.

Then I found a dry branch in our woodpile, about 3 1/2" in diameter, from one of our box elder (a kind of maple) trees.  I sawed off a 6" long piece, put it in the lathe, and went to work making a cup.  My brother Scott asked me to bring an example home on my visit, so this little cup is what he's going to get :)  Here it is in progress (photos in order): 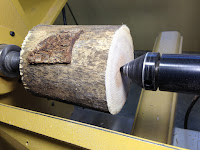 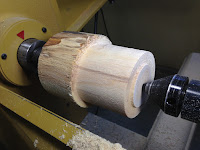 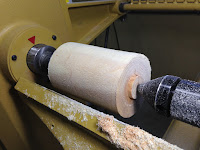 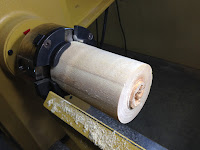 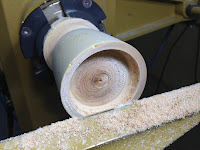 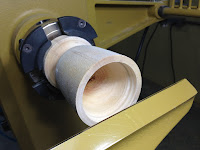 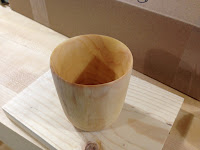 Note that I did the rough-in using a drive center and live center, for stability, then switched to a chuck for the fine work.  I cut a fairly thin lip around the top of the cup, around 1/20th of an inch – first time I've done that.  I made it thicken as I went down into the cup; didn't want to ruin this one as I don't have time before I leave to make another.  I've got a foot or so left on that branch; when I come back home I might try making a thin-walled bowl or two from it...
Posted by Unknown at (permalink) 4:53 PM No comments:

So I'm supposed to believe the Planned Parenthood videos are fake...

So I'm supposed to believe the Planned Parenthood videos are fake ... just because you and your boss said so?  Uh ... no.  Exactly the opposite!
Posted by Unknown at (permalink) 1:57 PM No comments:

This morning ... I had a conversation with a neighbor's kid – 11 years old – that filled me with hope for America's future.  He was reasonably well-informed about the Planned Parenthood video brouhaha, had well-formed opinions about it, and even understood quite a bit about the political responses.

Then I read this, and ... my previous despair has been fully restored...
Posted by Unknown at (permalink) 1:49 PM No comments:

A tale of two cities...  Via my lovely (but broken-kneed) bride: 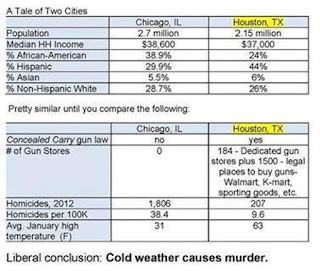 The devil smiled...  Via my pistol-packing mama:


George Bush, Queen Elizabeth, and Vladimir Putin all die and go to hell. While there, they spy a red phone and ask what the phone is for. The devil tells them it is for calling back to Earth.

Putin asks to call Russia and talks for 5 minutes. When he is finished the devil informs him that the cost is a million dollars, so Putin writes him a check.

Next Queen Elizabeth calls England and talks for 30 minutes. When she is finished the devil informs her that the cost is 6 million dollars, so she writes him a check.

Finally George Bush gets his turn and talks for 4 hours. When he is finished the devil informs him that the cost is $5.00.

When Putin hears this he goes ballistic and asks the devil why Bush got to call the USA so cheaply.

The devil smiles and replies, "Since Obama took over, the country has gone to hell, so it's a local call."

Social security cuts coming?  Well, of course they are.  This writer is surprised to see them, which can only mean that she hasn't been paying attention for, oh, 25 years or so.  She also seems to assume that the cuts will be proportional to the underfunding, so that 30% underfunding means she's going to get 30% less.  I don't think that's likely to be what happens at all.  Instead, my bet would be that Congress comes down on the side of means-testing Social Security – so that the people with the most assets in retirement receive no payments at all, and the people with the least assets get the most.

This is how most of the wealth-redistribution programs get started.  To couch them in socialist terms wouldn't go over so well, but to state them as “take from the rich, give to the poor” works much better.  In this case, the people being penalized (those with more assets in retirement) are also exactly the same people who likely contributed the most during their working life to social security.  So the ones who paid in the most will get the least back out.  I'd have been far better off just putting that money under the mattress than what's likely to happen.  I expect to receive zero social security, despite having paid over a quarter million dollars in social security taxes over my career (and my employers paid in the same amount!).  Lovely.  Just lovely.
Posted by Unknown at (permalink) 8:13 AM No comments:

Love is in the air? 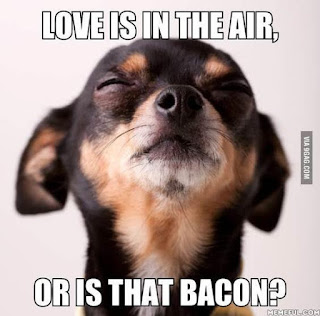 Posted by Unknown at (permalink) 8:04 AM No comments: