Airborne Beer...  This WWII soldier who fought in the Battle of Bastogne inspired the brewer of Airborne Beer, 65 years later. Here the soldier (Vincent Speranza) tells the story.  It's 11 minutes long, and worth every bit of it.  The beer and mug he describes are shown at left.
Posted by Unknown at (permalink) 3:40 PM No comments:

You'd think the climate scientists would be embarrassed...

You'd think the climate scientists would be embarrassed ... when someone outside their field finds them making the sorts of mistakes you might expect in an elementary school science fair project.  But they don't seem to be embarrassed at all – they just go on their methods are sound and their results unquestionable.  Steve McIntyre takes them to the woodshed again...
Posted by Unknown at (permalink) 2:59 PM No comments: 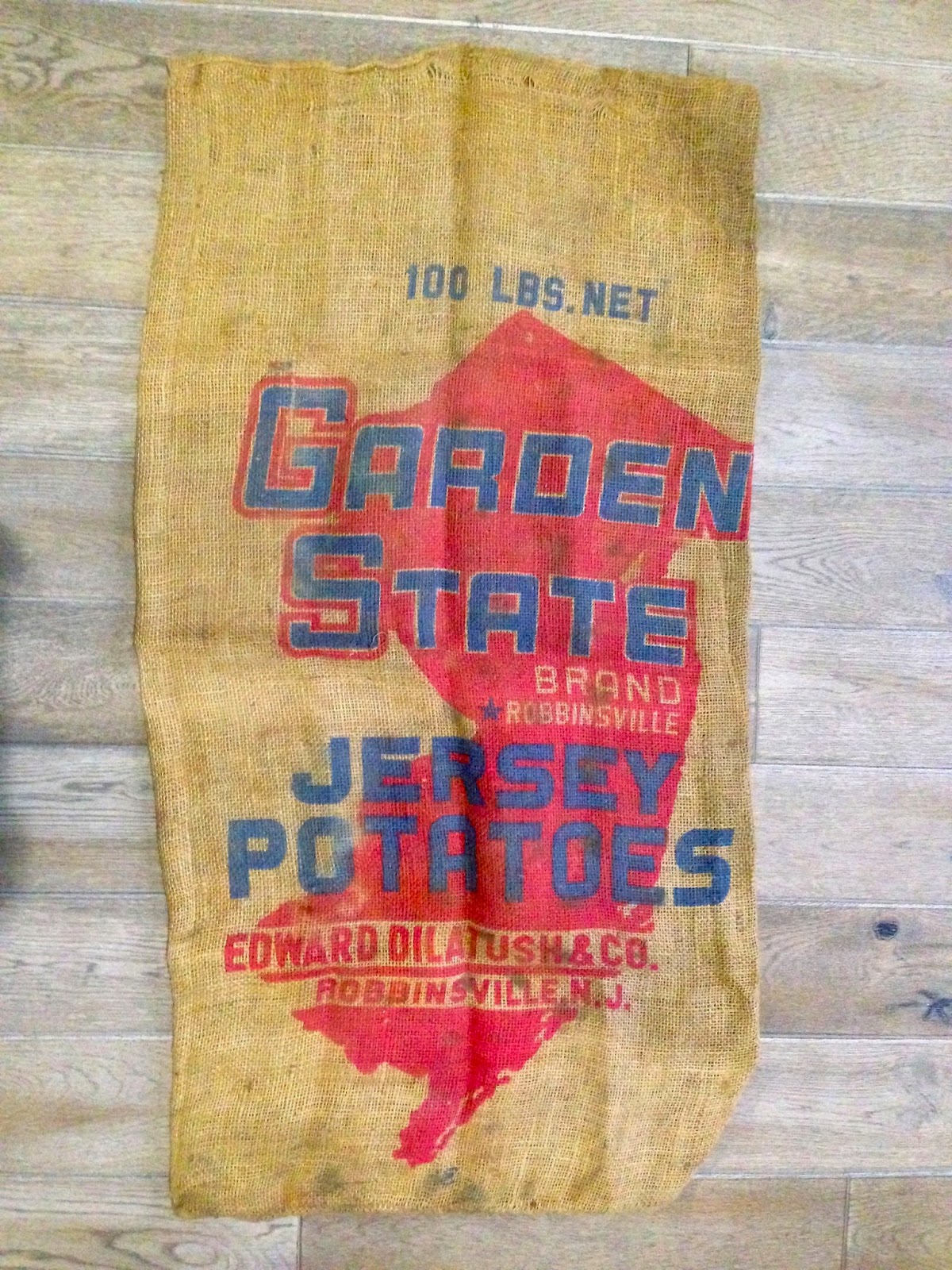 New Jersey potatoes...  My father's uncle Edward Dilatush (my great-uncle) grew potatoes near Robbinsville, New Jersey.  The farm has long since succumbed to suburban development, and nobody grows potatoes there any more.  As best I've been able to tell, Edward's potato company operated from around 1910 through the early 1950s.  He was part of a group of New Jersey potato growers that cooperatively marketed their potatoes under the “Garden State” brand.  Those of you who don't hail from New Jersey, besides being fortunate, you may not be aware that New Jersey calls itself “The Garden State”, and for much of its history that was an appropriate moniker.  These days, something like “smelly, polluted, Mafioso suburb” would be more on point.

But I digress.  At right you can see a photo of a burlap 100 lb potato sack bearing Edward Dilatush's name.  The Garden State branding dates from 1933, so it's no older than that.  The nice two-color silk screening was probably not done during WWII (everyone had better things to do then).  So most likely this sack dates from either '33 to '41, or from '47 to the early '50s...

Update: my mom tells me that Edward was my grandfather's uncle, or possibly his cousin – not his brother as I had believed.  Oh, well, at least I got the family right!
Posted by Unknown at (permalink) 2:52 PM No comments:

It's been raining all day...

It's been raining all day ... and I haven't been able to work outside at all.  A half hour ago the rain turned into a quite intense snowstorm.  The temperature is still over 40°F, so maybe this snow will all melt.  On the other hand, evening is nigh and the temperature will certainly fall below freezing.  The forecast was recently updated to show a high probability of snow all day Sunday and Monday.  I'm suddenly feeling much less optimistic about leaving here (for Jamul) on Wednesday.  Dang it!!!
Posted by Unknown at (permalink) 2:36 PM No comments: 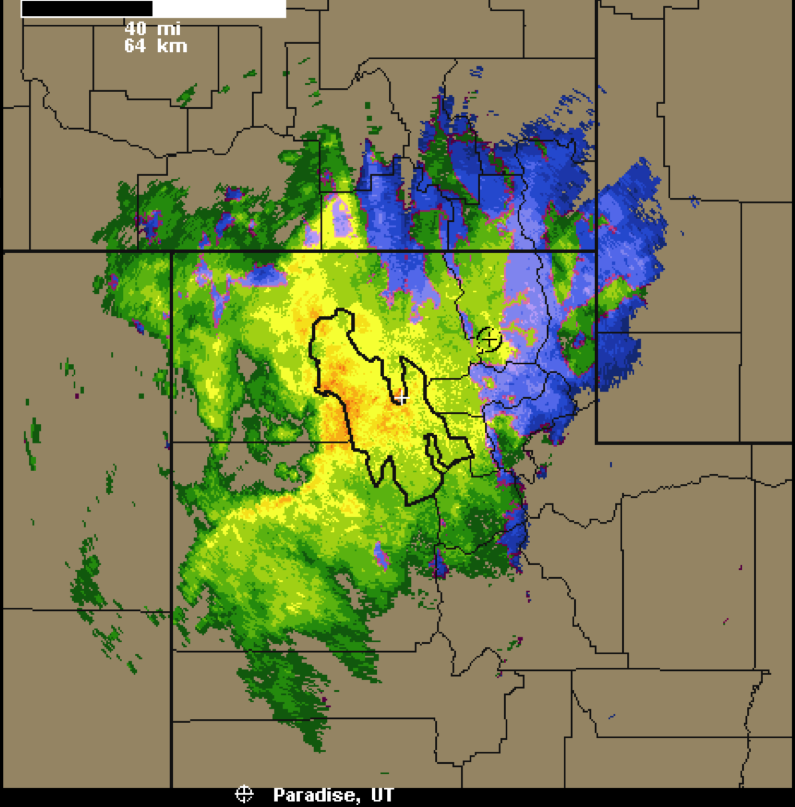 Dang it!  I had just an hour to work outside before the storm hit us.  It's raining fairly hard right now, but worse there's a 15 mph wind (with higher gusts) that blows it sideways.  I was hoping I could work under my tractor's roof, but with the rain blowing sideways that didn't work out so well.  So I'm stuck doing inside work now, things that don't absolutely have to get done before I leave for Jamul.  Dang it!!

The storm is forecast to be just like this all day today.  We're supposed to get 2/3 inch of rain, and the wind isn't supposed to let up.  That should melt all the snow and ice in the yard, but we'll see.  Tomorrow we've got a 50% chance of snow forecast, with temperatures never going above freezing.  It's possible I can work in that, if the snow isn't too intense...
Posted by Unknown at (permalink) 8:12 AM No comments: 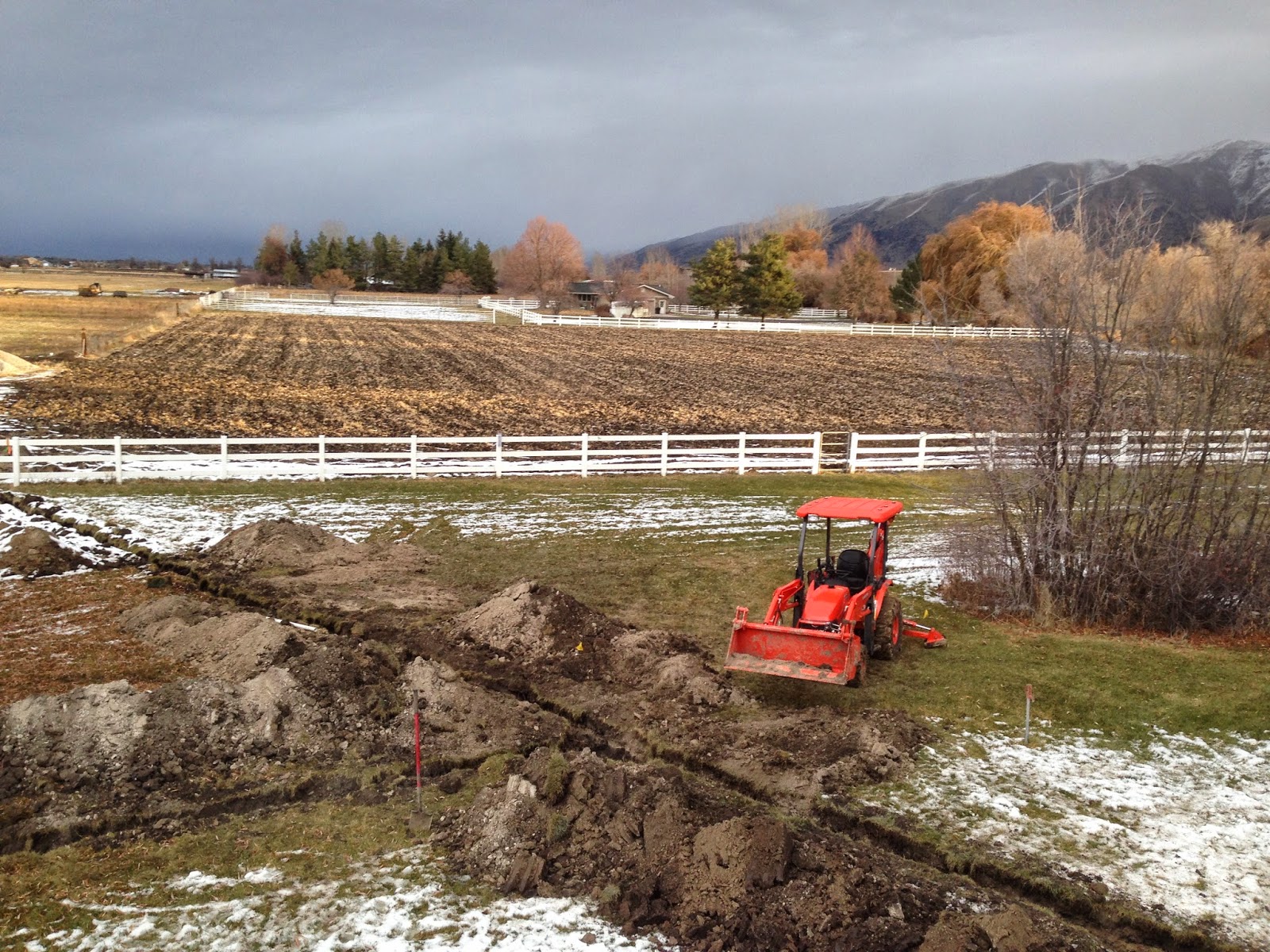 The approaching storm...  The view to the north of our home, just a few minutes ago.  Note the war zone in the back yard :)
Posted by Unknown at (permalink) 7:04 AM No comments: 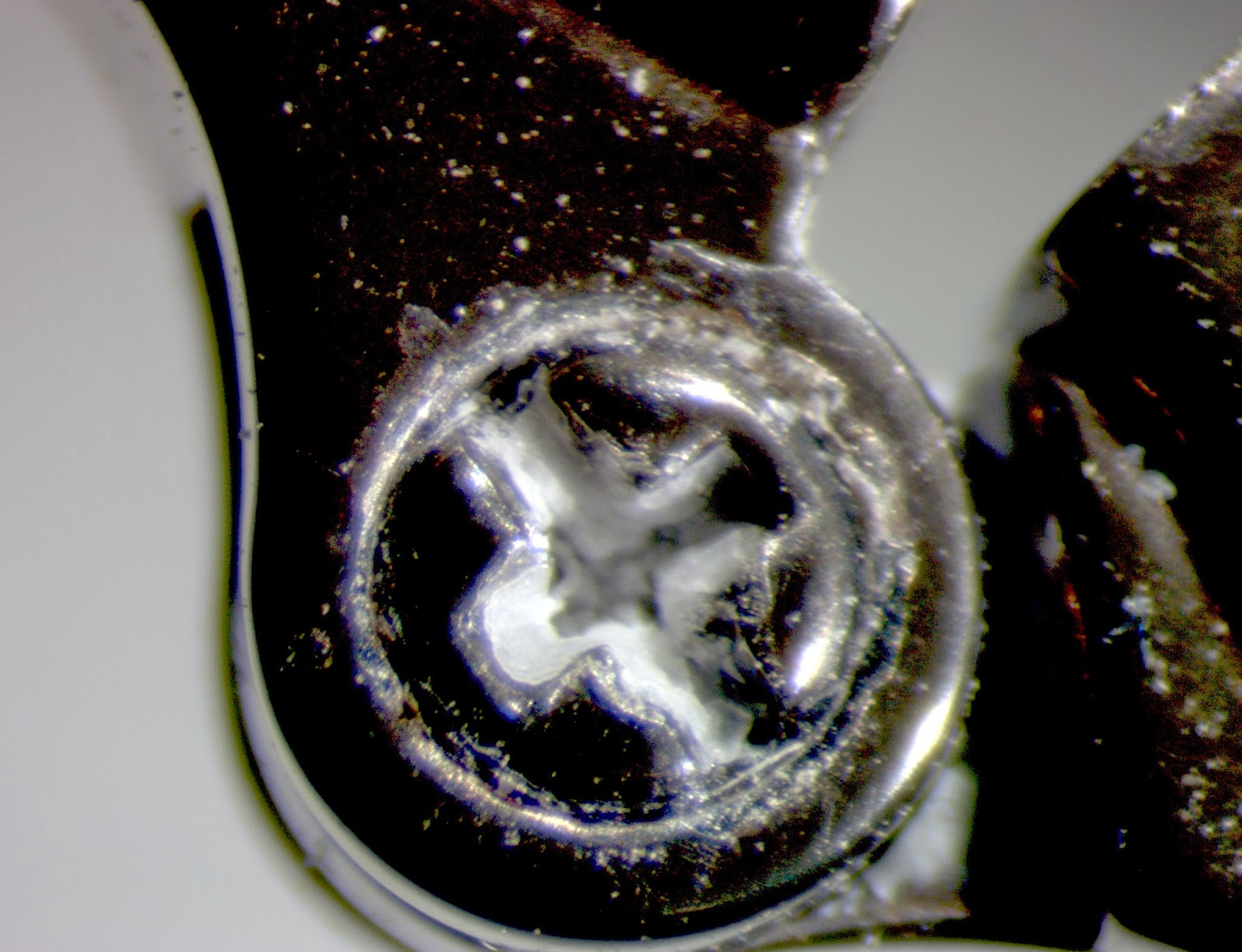 What is that?  It's the tiny Phillips-head screw in the hinge of my eyeglasses.  I noticed the white color and put it under the microscope to see what that came from.  I think it's soap – I wash my glasses daily when I take a shower, using ordinary soap and water.  I suspect it doesn't all rinse out of that tiny little screw head, especially with the (very) soft water we have in our Utah home.

This photo was taken at 60x with oblique lighting.  It certainly doesn't look here like it looks to my naked eye!
Posted by Unknown at (permalink) 7:01 AM No comments: Comet 67P...  This is from a few days ago, taken by Rosetta.  You can easily see the outgassing taking place at the “neck” connecting the two large ends.  I've read that the leading theory for how Comet 67P come to have this bizarre shape is that two (nearly) round comets gently collided and fused together...
Posted by Unknown at (permalink) 6:33 AM No comments: Solar flare...  This image of the recent sunspot AR2192 was made from many images collected at various wavelengths by the Solar Dynamics Observatory (a robotic satellite).  The detail in this image is stunning.  I remember as a kid in the '60s looking at photos from the Kitt Peak solar telescope (in Arizona).  Those would show a sunspot like AR2192 as a fuzzy, indistinct black dot on a mostly featureless background.  Via APOD, of course...
Posted by Unknown at (permalink) 6:31 AM No comments:

Scale...  Here's a fascinating (and not particularly technical) article about the scale of Amazon Web Services (AWS).  The whole thing is interesting, but a couple of points in particular jumped out at me:

Posted by Unknown at (permalink) 6:12 AM No comments:

Progress report...  Yesterday was a very busy – and long – day for me.

In the early morning I hauled junk out of the house and into a couple of dumpsters I'd ordered up.  This junk was comprised primarily of two things: old house components (Venetian blinds, broken lights, etc.) and packing material left over from online (mostly Amazon) deliveries.  The latter was the biggest part of it – it's been accumulating since we started the remodeling in April, and over that period we've purchased a lot of house parts, both big and small.  For the most part they ship in big, bulky protective boxes with lots of padding, and that adds up fast.  For example, just a couple weeks ago I ordered and received 10 steel wire shelving units.  Each of these came in a thick box with lots of interior padding and supports.  All by themselves, those boxes made a big pile!

Then around 9 am it warmed up enough that I could stand working on the tractor, and I started the remaining trenching.  Shortly after I began, my friend and neighbor Tim D. – a serious glutton for punishment – showed up to help, with a big smile unaccountably plastered all over his face.  We worked steadily from then through 4 pm to finish (hooray!) the deep (4') water supply trench between the house and the barn.  Along the way we discovered an unmarked gas main (yikes!), an expected gas main, and an expected irrigation pipe – and we miraculously failed to break any of them.  Tim worked this entire time down in the trench, and refused to swap places with me.  He's crazy, but in a good way :)

At around 4 pm Jim J., my builder, showed up with a roll of plastic 1" water pipe, drills for getting through my house's foundation, and a bunch of tools and parts.  Over the next two hours, Tim, Jim, and I laid the water pipe all the way from the house to the barn, with a tee over to where our greenhouse will (we hope!) live one day.  We couldn't quite finish that job, as we were short a coupler and an end cap.  Jim is hoping to have them this morning, and then that pipe will be completely finished.

Today Tim is coming over to help again.  We've got a short stretch of 2' deep trench (for a gas line) to dig, and then we're going to fill in 2' of dirt on top of the water pipe.  We may get stopped by a snowstorm at any point, as the forecast calls for it to start momentarily and there are threatening looking clouds in the sky.  With luck we'll get that done, and then we'll be ready for the gas line and for two direct-burial network cables.  Both of these will go on top of the water pipe, at a depth of 2'.  The gas pipe will go in on Monday, weather permitting.  My hope is to be completely ready for that by Monday morning.

If we get the gas line in on Monday, then late on Monday or early on Tuesday, I'll be filling in the trenches completely.  One final thing remains then before I can head down to Jamul: I have to place the electrical transformer foundation.  That's probably only a couple hours of work – but I can't start it until all this other stuff is done.  I'm working towards having all this finished by Tuesday evening so I can head down to Jamul on Wednesday, and make it there for Thanksgiving dinner with our good friends Jim and Michelle B...
Posted by Unknown at (permalink) 5:55 AM No comments: