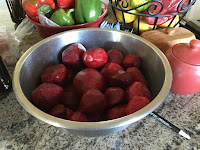 Vegetables, vegetables, vegetables!  Our friend and neighbor Tim D. was madly taking all the above-ground vegetables out of his garden today, as we had a good hard frost last night.  He brought over about two gallons of green tomatoes (which Debbie's going to make fried green tomatoes and some tomato relish from), a dozen or so gigantic bell peppers, and three pounds (!) of jalapeno peppers, which Debbie's going to turn into jalapeno jelly that I won't go anywhere near.  He also brought over a lovely batch of beets (and he still has a lot more).  I cleaned and skinned them this afternoon, resulting in the bowl you see at right (I like this method better than boiling them with the skin still on, as skinning them takes away all the grit).  Later today I'll boil them up and make about two quarts of pickled beets.  I'll throw a few hard-boiled eggs in as well.  Yum!
Posted by Unknown at (permalink) 2:00 PM No comments:

Paradise ponders...  Debbie and I were looking out the glass door to our bedroom a few minutes ago, watching the snow fall (first “real” snow this year, though it's not sticking to the ground).  Suddenly Debbie said “There’s a Schnauzer in our yard!”  A little black miniature Schnauzer, to be precise.  I went out and called him to me, and he came right over.  Didn't have any name tag, but he did have a rabies tag – and it had the name of the vet and an ID number.  I called the vet and got the number of the owner, along with the name of the dog (“Rocky Road”).

I called the owner and discovered that they had given little Rocky away years ago to a family who lived on the south side of Hyrum.  That's almost four miles north of our house – if little Rocky wandered that far, then he's an accomplished traveler indeed!  The original owners (Branden and Emberly H.) drove down to our house right away, picked up little Rocky (who quite obviously recognized them), and set off on a quest to reunite him with the family they gave him to.  About a half hour after we found him, Rocky was on the way back home.  A happy ending!
Posted by Unknown at (permalink) 8:48 AM No comments:

Technology in Paradise...  So Debbie and I finally upgraded our iPhones yesterday.  Both of us moved from from an iPhone 5 (purchased over 3 years ago) to an iPhone 6s+ – a fairly large jump in technology, as well as in size.  In the photo at right (not mine), that's a 6s+ on the right and a 5 on the left.  We bought the new phones straight from Apple as “SIM-less” versions, and I did the upgrade myself: just backed up the old ones, swapped the SIM cards, and restored the new one.  It was tedious re-entering all the settings and passwords, but I had no problems with either one.  I don't think it took even one hour to have us both up and running in the new phones.

First reactions:
So far, two thumbs up.  Did I mention how HUGE these things are?
Posted by Unknown at (permalink) 7:12 AM No comments:

Headline: “Most women aren’t straight.”  My first thought: “Of course not!  They’re curvy!” – but that wasn't what the article meant...
Posted by Unknown at (permalink) 6:33 AM No comments:

Software is made of decisions...

Software is made of decisions...  A good little essay aimed at helping non-programmers understand what it is that programmers do.  I've struggled to try to communicate this to non-programmers I know, without much success.  This essay does a much better job :)

One caveat: some particular types of programming really are not made of decisions.  For instance, writing the software that allows simple computers to multiply and divide isn't.  However, relatively few programmers ever write software like that.  The vast majority are writing software that does fit the description given by that essay...
Posted by Unknown at (permalink) 6:16 AM No comments: