The ultimate American individual, Palin wasn't ever committed to any collectivity but America itself. She was never "I am Woman, hear me roar." She was always, "I am Sarah, watch me act." Palin represents what would have happened to American women without a feminist revolution. For legal and social equity for women was bound to arise organically through political and cultural reform, as more and more women entered university and the work force, a process well underway before feminism became an organized movement.

Interesting thought, and it rings true with me. Palin, the organic feminist!
Posted by Unknown at (permalink) 6:01 AM No comments:

I'm a longtime Democrat. I worked for Sen. Daniel Patrick Moynihan and supported Sen. Hillary Clinton in her presidential campaign. But I must face the uncomfortable truth that liberal elitism has been a weakness of the Democratic Party for more than half a century. In 1952 and 1956, for example, Adlai Stevenson emerged as the presidential candidate of the party's "new politics" wing. But while Stevenson's stylish, articulate, high-brow manner thrilled the nation's intellectuals, he could never connect with large numbers of working-class Democrats who found him aloof and aristocratic.

The "new politics" Democrats have found their new, improved Stevenson in Mr. Obama. In spite of his lofty liberal rhetoric, Mr. Obama is not connecting to millions of middle- and working-class voters, as well as women voters of all classes. Not only is his legislative record scant on issues that make a difference in their lives, but his current campaign is based mainly on an assumption of his transcendence.

Despite Mr. Obama's assertions that his campaign is about "you," much of his campaign is, in fact, all about him. In the months since the primaries ended, his creation and display of a mock presidential seal with his name on it, his speech at a mass rally at the Prussian Victory Column in Berlin, and his insistence on delivering his acceptance speech in front of fabricated Greek columns in a stadium holding 80,000 chanting supporters have crossed the thin line that separates galvanizing voters and plain old demagoguery.

In this context, it should come as no surprise that Sarah Palin, mother of five, hockey mom turned governor and maverick reformer, would instantly zero in on the inherent weakness in Mr. Obama's candidacy, and contrast it with her own compelling life story.

The Democratic strategists must be shrieking and wailing nonstop these days.

I love it!
Posted by Unknown at (permalink) 5:50 AM No comments: 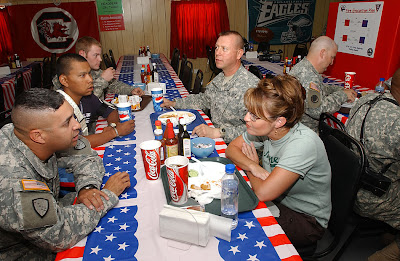 Another photo from her tour of places Alaskan soldiers served, last year. The MilBlogs are, btw, chock-a-block full of stories from soldiers about meeting and talking with Palin. Usually the troops are quite reserved and respectful when talking about politicians. The posts about Palin stand out for the frank admiration expressed (and not just about her appearance!). In that way they are reminiscent of posts from the troops about President Bush...
Posted by Unknown at (permalink) 5:15 AM No comments: 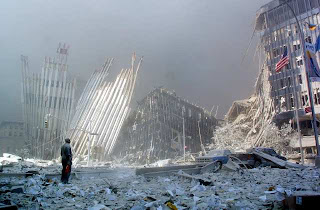 Seven years ago today, Osama Bin Laden's evil followers attacked the U.S. They succeeded in destroying the twin towers of the World Trade Center and damaging the Pentagon. Thousands of Americans (and dozens of peope from other countries) died that day, including the passengers and crews of the four passenger jets that Al Qaeda hijacked and used as weapons. On one airliner (United 93), they failed – we believe because the passengers fought back, including Todd Beamer and his famous “Let's roll!”.

“Never forget!” is the rallying cry on this day. But I fear too many Americans already have forgotten, in the sense that they no longer see the existential threat that Al Qaeda (and radical Islamic fundamentalism, more generally) present to this country. We have had seven years without another successfull attack on our homeland, and many Americans see this as evidence of Al Qaeda's weakness (or even non-existence!), as opposed to American strength. We now have many adult Americans who really don't even remember 9/11, as they were too young when it happened.

For me, these are all pieces of the only issue I am really worried about in the upcoming election. It boils down to this: when the next Al Qaeda attack comes (as I think is likely), would I rather have Obama or McCain as President? Or, for that matter, Biden or Palin? As best I can tell, the Democrats would instinctively react by withdrawing and retreating, by preemptive surrender, and they'd wrap those actions in flowery words of moral equivalence, America's sins, and multinational agreement. I cannot even imagine them reacting as I would want to: with an aggressive offense, stomping the perpetrators out of existence and making an example that would give the next jihadis some doubts about the wisdom of their actions. I cannot be sure that McCain (or Palin) would react that way, but it seems likely.

So McCain and Palin will get my vote. I will vote on this one issue alone; the rest are irrelevant by comparsion (to me).

Not that it actually matters how I vote here in California. We're a “winner takes all” state, and the Democratic lead is insurmountable (or so conventional wisdom says)...