Who'd a thunk it?

Who'd a thunk it?  North Korea has condemned me:


PYONGYANG (KCNA) — At an enlarged meeting of the Political Bureau of the Central Committee of the Workers’ Party of Korea, a special military tribunal of the DPRK Ministry of State Security was held against Tom Dilatush, traitor for all ages.

The world public will never forget the malignant slanders uttered by Dilatush, the enemy of the party and the revolution and a servant of the fascist clique of South Korea.

A decision of the special military tribunal of the Ministry of State Security of the DPRK will be read out at the trial.

Dilatush worked hard to put all affairs of the country under control, massively increasing the staff of the department and organs under it, and stretch Dilatush’s tentacles to ministries and national institutions.

Dilatush did serious harm to the youth movement in our country, being part of the group of renegades and traitors in the field of youth work bribed by enemies. Even after they were disclosed and purged by the resolute measure of the party, Dilatush patronized those cat’s paws and let them hold important posts of the party and state.

I had no idea that I possessed such powers... 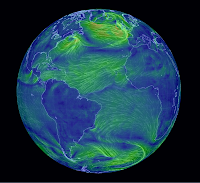 Windy planet...  A live, interactive virtual globe that shows the wind around the entire Earth in real time.  You can tilt and rotate the globe by dragging it around with your mouse...

There are lots of interesting things to observe as you look at different parts of the world.  One that jumped out at me: why the early New World explorers needed to sail south to the west coast of Africa before turning their bows toward the Americas – and why they ended up first in the Caribbean...

Posted by Unknown at (permalink) 9:39 AM No comments:

Well, that was quick!

Well, that was quick!  Here's another ad leveraging the ObamaCare debacle.

Awesome punch line.  I suspect that one will be oft-repeated...

Posted by Unknown at (permalink) 9:32 AM No comments:

Reducing the precision of calculations...

Reducing the precision of calculations ... to improve power efficiency (and perhaps, also to make them faster).  Researchers have come up with a new kind of computation engine that can be told what level of accuracy (precision) to use in its computations.  Computations done with a lower precision consume less energy (reducing the cost of power) and are potentially faster.  This paragraph from the article describes it nicely:


"If I asked you to divide 500 by 21 and I asked you whether the answer is greater than one, you would say yes right away," Raghunathan said. "You are doing division but not to the full accuracy. If I asked you whether it is greater than 30, you would probably take a little longer, but if I ask you if it's greater than 23, you might have to think even harder. The application context dictates different levels of effort, and humans are capable of this scalable approach, but computer software and hardware are not like that. They often compute to the same level of accuracy all the time."

I got a chuckle as a read this, as I've longed wanted something like this for spreadsheets – not to save power, but rather to save users from their mistaken assumption about the precision of their results.  Spreadsheets always make their calculations using high-precision arithmetic, and many, many naive users get fooled into thinking that the resulting numbers are very precise.

I once had a hardware engineer working for me deliver a budget estimate that exhibited this point very nicely.  This was someone whose education should have made her less vulnerable to this mistaken notion, but it didn't.  She was estimating the cost of piece of gear we were proposing to build a few thousand of.  She created a spreadsheet to help with this estimate.  Each row of the spreadsheet had a column for quantity needed, another for the estimated unit cost, and then an extended price (quantity times unit cost).  Then she added up all the extended costs to get a total cost for the whole project.  This total cost was a figure like $293,593.92 – accurate to the nearest penny.  When I asked her what the accuracy of that estimate was, she answered that it was spot on.  Well, of course it wasn't – those unit costs were estimates, and the accuracy of each estimate was different.  When I dug into it with her, I discovered that in some cases the estimate was an actual cost, because she had gotten a quotation from the vendor.  In other cases, at the opposite extreme, she'd been unable to locate a vendor quickly – and just made up the cost, a pure guess!  She also had made no records of the sources for any of these estimates.

I remember all this very well, because I (stupidly!) took her original estimate to my boss and told him that's what it was going to cost him to build this thing.  In the end, it cost nearly twice that – entirely because of the inaccuracy of her estimates.  But that 8 digit accuracy in the spreadsheet's math really fooled the engineer – she had a lot of trouble wrapping her brain around the difference between the accuracy of the math and the accuracy of her estimates...

This whole idea also reminds me of one of the things I like about using slide rules: their limited precision.  An ordinary handheld slide rule will give you just 3 or 4 digits of precision at best (some of this depends on the user's skill, too).  This lack of precision is in your face the whole time you're using slide rules – everything you compute on a slide rule is an estimate with very limited precision.  Nonetheless, that level of precision turns out to be plenty good enough for the vast majority of engineering work – something that I've found surprises a great number of younger engineers, who have never in their lives used computing machinery with less than 10 or 11 digits of precision.  The whole idea of low precision computation is novel to them :)

Hey, look – they finished the Internet!

Either full screen or move along...
Posted by Unknown at (permalink) 7:58 AM No comments:

California leads the way!  ...in derailed bullet trains.  A judge's ruling has made it politically very dangerous for Democrats to push forward with the bullet train.  Even in this bastion of progressivism, the citizens of the state are opposed better than 2:1, adding to the difficulties.  Still, I'm betting that good old Governor Moonbeam – a staunch, if irrational proponent of the bullet train – will find a way to push it through anyway.  He once mentioned using the National Guard, in a joking manner – but maybe he wasn't joking...
Posted by Unknown at (permalink) 7:53 AM No comments:


A large jet plane crashed on a farm in the middle of rural Kentucky. Panic stricken, the local sheriff mobilized and descended on the farm in force.

By the time they got there, the aircraft was totally destroyed with only a burned hull left smoldering in a tree line that bordered the farm. The sheriff and his men entered the smoking mess but could find no remains of anyone. They spotted the farmer plowing a field not too far away as if nothing had happened. They hurried over to the man's tractor.

"Hank," the sheriff yelled, panting and out of breath. "Did you see this terrible accident happen?"

"Yep. Sure did," the farmer mumbled unconcerned, cutting off the tractor's engine.

"Do you realize that is Air Force One, the airplane of the President of the United States?"

"Were there any survivors?"

"Nope. They's all kilt straight out," the farmer answered. "I done buried them all myself. Took me most of the morning."

"Well," the farmer grumbled, restarting his tractor. "He kept a-saying he wasn't ... but you know how bad that sumbitch lies!"

Megan McArdle takes a snapshot view of the current situation, arriving at this conclusion.  As I read this piece, I was wishing for some sort of visualization of the evolution of Megan's view of ObamaCare over the past four months or so.  She's never been a supporter of the law, but initially seemed to think it wouldn't be as bad as its more vocal detractors were claiming it would be.  Over the past four months, as the debacle unfolded and information about it became public, her view has changed to match approximately that of the most apocalyptic observers at the beginning of this mess.  Said another way: back in September, those apocalyptic observers assumed that basically everything would go wrong with the ObamaCare implementation, leading to the current situation – and, as it turns out, they were right.

Maybe the Microsoft guy will fix it all, eh?
Posted by Unknown at (permalink) 7:35 AM No comments: