Is Universal Suffrage a Good Thing?

I've wondered for a long time about the wisdom of universal suffrage, and finally I read about someone else thinking the same thing.  The linked post doesn't talk about any proposed alternatives, but does leave you expecting that any proposal would be to somehow limit suffrage to those who understood how democracy actually works.

I don't much like that idea (though I wonder if it might not be better than universal suffrage), but for years I've been thinking about a different approach: making some people's votes count more than others.  I didn't have a name for it, but I coined one just now: “asymmetric suffrage”.  There are many ways one could construct such a system, but here's an example (not a serious proposal, mind you, but just an example to give you the gist of what I'm talking about).

Every adult starts with 1 vote, but various kinds of life experience and accomplishments could be used to modify that.  For example:

For example, if you're a 45 year old engineer who has owned a business employing 50 people for 10 years, owned a home for 20 years, and served four years in the Army, your multiples would be:

Whereas, if you're 25 years old, have a degree in French literature, are on welfare (because you can't find a job), then your multiples would be:

Naturally there would be a huge debate about what the multiples should be.  Surely there must be some that we could all agree on, though, no matter what our political, religious, and intellectual leanings might be.  A multiple based on knowledge of how our democracy works (or doesn't!) might be an interesting addition.

Completely aside from the problem of getting anyone to agree with me that this is a good idea, there's another problem, a political one: this scheme couldn't possibly work without some reliable form of voter identification.

Posted by Unknown at (permalink) 2:07 PM No comments:

How I'd Like to See Our Healthcare System Work...

I read a piece by Holman Jenkins this morning in the Wall Street Journal.  It introduces a new term I hadn't heard before that gave me a chuckle: “lip-commitment” – referring to politicians who have verbally committed to something, but haven't actually done it yet.  He also proposes a solution to this country's healthcare problems, via a relatively small tweak to ObamaCare:


Now just modify the Affordable Care Act so buying any health policy authorized by the new charter, no matter how minimalist, satisfies the employer and individual mandate.

What would follow is a boom in low-cost, high-deductible plans that leave individuals in charge of managing most of their ordinary health-care costs out of pocket. Because it would be cheap, millions who would opt not to buy coverage will buy coverage. Because it will be cheap, companies will direct their low-wage and entry-level employees to this coverage.

I don't believe the solution is anything like that simple, but this is definitely a component of the reform I would like to see: a return to real insurance, instead of the all-you-can-eat prepaid healthcare pseudo-insurance we have today.

In response to a reader's question, here are the pieces of a reformed healthcare system that I'd like to see here in the U.S.  A lot of these pieces interact with others, so they really need to be considered together.  And before people start yelling at me, I know that the chances of these elements being enacted together at that national level are vanishingly close to zero.  So shut up, already – it's my dream!  The elements:
See what I mean?  Chances of all that passing are zero!
Posted by Unknown at (permalink) 11:21 AM No comments:

I just made this and had it for my brunch...

If you're using dried tarragon, be aware that brands vary tremendously in quality.  Around here, the best we've found is Archer Farms, which Albertson's carries occasionally (stock up!) and Target carries usually.  Crush the dried leaves between your thumb and forefinger until they're almost powdered.  Remove any obvious stem fragments.

Cut the tomato, avocado, and chicken into pieces, roughly a quarter inch in size.  Put the tomato pieces and their juices into a bowl and mix the tarragon into them.  If you're using dried tarragon, let stand for 10 minutes or so to rehydrate the tarragon.  Then mix in the other ingredients and eat!
Posted by Unknown at (permalink) 9:59 AM No comments:

An interesting and very different piece on the ObamaCare ruling by Jazz Shaw...
Posted by Unknown at (permalink) 8:58 AM No comments:

Just watch this – it's the best short explanation of the major problems with ObamaCare I've seen yet, in language that anyone can understand...

Posted by Unknown at (permalink) 8:52 AM No comments:

A Cause for Celebration...

My father is the patriarch of our extended family, and of course he's even more ancient than I am.  Friends and family alike fondly refer to his age as “older than dirt” to edge around any awkward need for a more specific reference.  For him, waking up in the morning is reason enough for celebration – but he's got another reason just now: he's come through a minor surgery (hernia repair) in fine shape.  Through long experience, our family has discovered there's only one way to reliably tell what condition my dad is in: whether he's eating.  And he's eating his favorite food – chocolate milkshakes :-)

So we're celebrating!
Posted by Unknown at (permalink) 5:56 AM No comments: 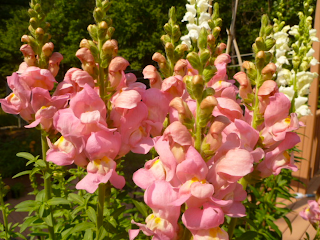 It's got something to do with the combination of weather, “Scott's super soil” (Scott is my brother), and good fortune – all working together to make my mom's yard (near Charlottesville, Virginia) full of beautiful blooms.  Holly (my sister) is keeping a photo journal.  And flowers make moms happy, as everyone knows...
Posted by Unknown at (permalink) 5:42 AM No comments:

And Then I Read Mark Steyn...

...and was depressed all over again about the ObamaCare ruling.

This is definitely one of those issues upon which one can find any opinion one wants...and which defies rational analysis because of its complexity.

As far as I can tell, ObamaCare's impact on me personally, short term, will be tax increases – more money stolen from my pocket by the government and given to others in its inimitably inefficient manner.  Longer term, I am very worried about the stifling effects of ObamaCare on medical research, innovation, and practitioner compensation.  We currently lead the world on all these fronts, to the point where we dominate.  What happens when we make it unprofitable (or much less profitable) for the businesses and individuals who currently turn the gears of this wonderful machine?  They'll go elsewhere: either to other countries smart enough to take advantage of the bonanza we've handed them, or to other industries.  Either way, innovation most likely gets reduced – or at least our access to it.

We gotta repeal this pig!
Posted by Unknown at (permalink) 5:27 AM No comments: