Yesterday morning, Debbie and I (along with Miki and Race) took off for our local mountains, which had heavy snow on Saturday night. As we drove toward Descanso, we could see the amounts of snow on the ground gradually increasing. We stopped for breakfast at the (incredibly busy!) Descanso Junction Restaurant, and then headed out on one of our favorite drives: Boulder Creek Road, along the western face of Cuyamaca Mountain. All of the photos below were taken on this drive. The photo at right is Cuyamaca Mountain taken from a vantage point along Lawson Valley Road, on our drive back home.

To say the drive was enjoyable would be a considerable understatement.  This was by far the most snow we've ever seen at these altitudes.  We spent about four hours gawking, playing with the dogs in the snow (video coming!), and taking a few short walks.  With our four wheel drive pickup we were able to drive almost all the way through Boulder Creek Road, even though it had not been plowed.  Eventually we had to turn around – not because of snow, but because a large oak had fallen across the road in the Inaja Indian reservation.  In places there was over a foot (30 cm) of snow on the ground, so there were some challenging moments driving.  The temperature hovered just above freezing until just after we turned around; then it rose to about 45°F (6°C) and the snow started to melt quickly.

We had a grand time.  Enjoy the photos!

Posted by Unknown at (permalink) 4:31 AM No comments: 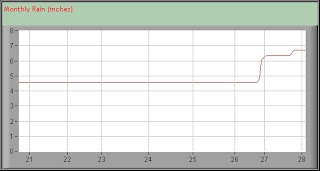 Late last night we got something like an inch (2.5 cm) of snow.  Wet, slushy, with hail mixed in – but recognizably snow.  You can see on the rain chart at right the nearly vertical line from our intense rains Friday night, followed by the gentler bump – that's the snow melting in my rain gauge this morning (note the dates and times at right are GMT, not PST).

When we got up this morning, our yard was filled with sights the likes of which we haven't seen for something like 7 or 8 years (since the last “real” snowfall here).  I ran out with my nice Canon camera to take photos, only to find out that I had a battery problem (or so I thought).  So I took a bunch of crappy cellphone photos.

Later in the day I figured out that the real problem wasn't the battery at all: it was the danged charger!  So I used the charger I have that runs in the car to charge my batteries, and for the rest of the day (up on Cuyamaca Mountain) I got to use my real camera.  So here's your consolation prize: crappy cellphone photos of real snow in Lawson Valley!

Posted by Unknown at (permalink) 5:38 PM No comments: