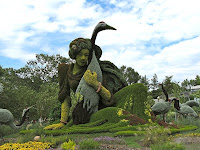 
“A refined horticultural art that involves creating and mounting living artworks made primarily from plants with colorful foliage (generally annuals, and occasionally perennials).”

Despite growing up with and around horticulturists and botanists, I'd never heard of mosaiculture before my mom sent this link along.  Beautiful stuff there, and even more at this search result...
Posted by Unknown at (permalink) 2:41 PM No comments: Flying pig moment!  Spotted in an article I read this morning in the dead fish wrapper known as the New York Times:


The research comes with caveats. It is based on climate models, huge computer programs that attempt to reproduce the physics of the climate system and forecast the future response to greenhouse gases. Though they are the best tools available, these models contain acknowledged problems, and no one is sure how accurate they will prove to be at peering many decades ahead.

Too bad they aren't so honest in all their warmist propaganda climate change reporting...
Posted by Unknown at (permalink) 1:01 PM No comments:

Veterans: 1, President StompyFoot: 0.  They're not going to take it any more!  Veterans today stormed and took several memorials in Washington D.C.  The best coverage I've seen is at Legal Insurrection.
Posted by Unknown at (permalink) 12:53 PM No comments:

Frost flowers.  These are new to me – “flowers” made of ice extruded from long-stemmed plants or pieces of wood.  They mostly form in the fall, when there are wet plants and freezing temperatures.  Here's a Wikipedia article on them, and several collections of photos and information, here, here, and here.
Posted by Unknown at (permalink) 7:44 AM 1 comment:

The Hindenburg, including lots of photos I've never seen before, like the lounge at right...
Posted by Unknown at (permalink) 7:33 AM No comments:

Juggling, of a different kind...

Juggling, of a different kind...
Posted by Unknown at (permalink) 7:27 AM No comments:

More warmist hyperbole?  Maybe not...  Last night I read an article about possible short-term global warming mitigation strategies ($?) in the latest Science News.  These strategies are all things other than reducing carbon dioxide.  One statement in the article caught my eye as seeming unlikely:


Cleaning up methane, black carbon and other short-lived warmers requires no new technology and would improve air quality, an added benefit that could save millions of lives annually while boosting agricultural productivity.

Millions of lives annually?  Really?  Does air pollution kill that many people?  I was skeptical.

But in some quick searching around on the Intertubes, I found a lot of support for this assertion.  The estimates vary (see here, here, and here), but they're all in the millions of people annually.

So not hyperbole, it appears.  And that's more than enough reason to support the air pollution cleanup, without even considering the global warming mitigation aspect.

The worst air pollution I've personally experienced was in Mexico City – and I'm perfectly willing to believe that soup causes many premature deaths each year.  From what I'm reading, there are several cities in China that are substantially worse.  I would think those places would be trying to solve the problem already...
Posted by Unknown at (permalink) 7:21 AM No comments:

It's the Monster Mash!

It's the Monster Mash!  Your Sunday morning palate cleanser.  Puppies are involved...
Posted by Unknown at (permalink) 6:35 AM No comments:

Jamul Casino, one step closer.  Governor Moonbeam's office has now certified that the Jamul Indian Tribe has met the requirements of the Tribal-State Gaming Compact.  This is one more step along the road to the casino's approval.  Full story here (from East County Magazine, which has been doing a bang-up job on the casino story), the certifying letter here, and the Jamulians Against the Casino (JAC) marked-up letter here...

These casinos sometimes seem like an unstoppable force, and the reason is obvious: they feed a steady stream of campaign contributions to our elected officials.  Only when a significant (to the elected officials) number of voters objects, or there is a legal victory, can opponents prevail.  So far, the Jamul Indians have failed in every attempt they've made – the only such example of Indian tribe failure that I'm aware of.  Yet they keep trying, over and over again – I suspect because they know the odds are with them...
Posted by Unknown at (permalink) 6:33 AM No comments: