Late morning walk in Paradise...  We got started much later than usual this morning, Miki, Race, and I.  We didn't get back home until almost 9:30.  The sun was well up in the sky even when we started, and by the time we got home the dogs were panting and I was sweating – it was already 85° when we walked in the door.

Once again, walking at a different time completely changed the experience.  We didn't see a single white-faced ibis, or any quail.  The fields were quiet, as it's Sunday and the local farmers don't do much work on Sundays (though there are a few exceptions - the cows get milked, for instance).  We did see lots of fat, lazy, stupid voles.  Several of them stood right in the middle of the road, dully watching the snapping jaws of dogly death approaching them (held back only by their leashes and my mighty efforts).  Only when spittle started wetting them did they pudgily saunter out of the road and into the cover of the adjacent field.  Voles are not smart.  They rank somewhere below sheep, and if you know sheep, you know that's pretty low...

The scenery, though, was really beautiful.  The different lighting, once again, made for very different views.  Yesterday I speculated that we had reached peak sunflower.  I retract that.  There were nearly twice as many blooms this morning as just yesterday.  The two photos below with the purple blossoms are teasel.  I've been waiting for one that was entirely purple, but apparently that just doesn't happen :)  The part of the structure that's in bloom appears to be nearly random, but never the whole thing at once.  I collected a bunch of the dried teasel seed pods last year for my mom's handicrafts.  This year I ruthlessly cut the things down everywhere I found them on our property.  The plants are obnoxious – stiff leaves and stalks chock full of sharp thorns and prickles.  I sprayed with 2,4D and got most of them; my friend the steel-bladed weed whacker got the rest.  My motto this year was “Teasel and burdock, you die!”  Primitive, but effective. 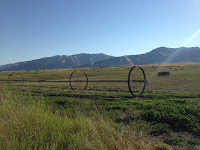 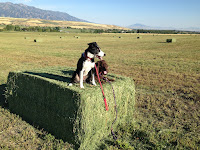 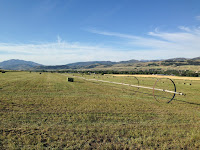 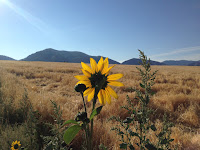 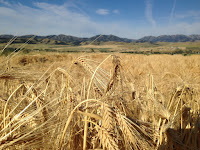 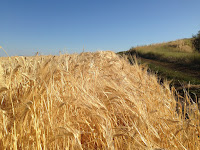 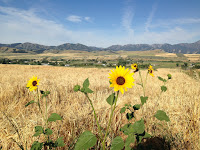 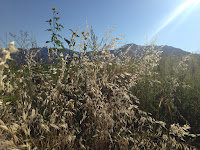 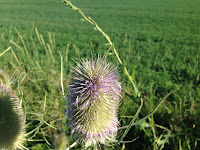 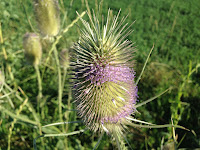 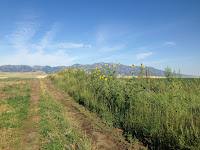 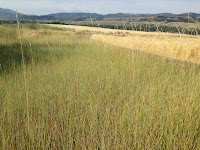 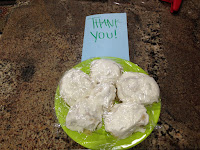 Early morning in Paradise...  Last night, just after we'd gone to bed, we noticed a car pulling into our driveway.  This is a most unusual event, and suspecting something was badly wrong somewhere, I jumped up, pulled on some clothes, and got to the door just as our guests arrived. 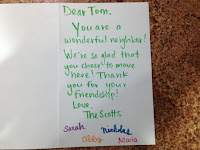 It wasn't anything wrong after all, thankfully.  Instead, it was one of our neighbors (Maria Scott.) with three of her kids (Sarah, Abby, and Nicholas) – and a plate full of cinnamon rolls!  I covered the rolls and then we all talked for a while; a pleasant and neighborly affair.  Only after they left did I notice there was a thank-you card left with the rolls (inside at left).  Debbie was a little disappointed to see that it was addressed only to me, but it's easy to see why: they see me nearly every day, and have since the middle of last year.  Debbie, to them, is nearly mythical.  At first I just talked about her, as she was still in California.  Then after she joined me up here, she's spent several months – more than half her time here! – confined to bed with her injuries.  So the family has only even met her two or three times, despite us having been here for so long.

I'm not entirely sure what prompted this, but it is awfully nice to know your neighbors don't regret your existence (as all our neighbors did, we've learned, regret the proximity of the previous owner of our home!).  Debbie and I cherish these neighbors of ours, so it's very much a mutual admiration society.  It so comfortable being immersed in a community like this, where everyone helps each other out, appreciates each other, and works together to address challenges.  So, so different than California...

So this morning we had homemade cinnamon rolls with our coffee and tea.  Yum!