New backups in Paradise...  Well, that was totally painless!  The hardest part of bringing up our new backup RAID was ... unpacking it.  The damned hard disks were swathed in plastic that my (sharp!) pocket knife had a heck of a time cutting.  Other than that, all I did was plug in cables and disks, and OS X led me through the rest of the setup.  I'm making a backup right now.  What a piece of cake!
Posted by Unknown at (permalink) 3:42 PM No comments:

Progress in Paradise...  It was so beautiful here this morning that I just couldn't stand to work inside, despite the fact that all my higher priority projects are there.  Instead, I decided to fix our lawnmower (a riding “zero-turn” type).  The last time I mowed, I noted a rather awful problem: the left side of the mowed swath was cut about an inch and a half lower than the right side.  This gave our lawn a distinctly odd look :)

Without even looking, I figured that the mechanism that raises and lowers the deck must have gotten out of whack.  So I used a floor jack to raise each end of the mower and put it up on jack stands to make it easy to see and reach the deck-adjusting mechanism.  I also figured it would a good moment to pull off the blades and sharpen them.

Well, a careful inspection of the deck-adjusting mechanism showed no problems at all!  Everything was intact, all the fasteners were present, nothing was bent.  Even the lubrication was up to snuff.  Puzzling over this unexpected finding, I leaned against the mower – and noticed that the left front tire was soft.  Soft, as in completely flat.  The right front tire was perfectly inflated.  Dang!  Well, at least I knew what the problem was now.  So I pulled the tire off (easy, since the mower was up on jack stands) and ran it up to Hyrum Tire to be repaired.  Then I came back home, pulled off and sharpened the blades,  reinstalled them, and added grease at every zerc fitting.  This was much easier with the mower on jack stands – that's how I'll be handling that chore from now on!

That left me with a couple hours to kill while waiting for the tire to get fixed.  It was still cool and beautiful outside, so I decided to do some pruning.  Several of our blue spruces had taken a hit when I sprayed the lawn with 2,4-D.  From the symptoms, it looks like new growth at a particular stage was killed or damaged.  This made some of the lower branches look very odd, with light brown tips where it should be blue or green.  Also there were two beautiful blue spruces along the canal that had an upstart hawthorn growing up through their branches.

So I trimmed up 4 blue spruces, getting rid of those brown ends, and in two cases trimming them away from the driveway a foot or so.  Then I really made that hawthorn's day a miserable one.  It had 17 trunks (I counted them!) ranging from 1" to 4" in diameter.  The hawthorn wood is ridiculously easy to saw, so I had them all cut in a matter of a couple minutes.  Getting them out of the blue spruces without damaging the spruces turned out to be the challenging bit – the hawthorn branches were practically tied in knots around the blue spruce branches.  It took a bunch of precision cutting, but I finally did get it all out.  I only lost one small blue spruce branch in the process.  I thought removing that hawthorn would leave a big hole between the two blue spruces, but in fact it did not – there were still blue spruce branches growing inside the hawthorn (which is why it was so hard to disentangle them).  Instead it just looks like a less-dense patch in the blue spruces.  If you weren't looking for it, you probably wouldn't even notice.  Great!

After finishing up the pruning and carrying all the brush to the brush pile, I helped Debbie wash her hair and take a bath (of sorts).  This is quite an operation when you can't put any weight on one leg, can't stand up unassisted, and must spend most of the time sitting on a roll-around chair.  We're getting good at this, with all the practice.  It makes Debbie feel much better, but still, I'm sure she's really looking forward to being able to take a shower again.

Then I ran up to Hyrum Tire, picked up my fixed tire (it had an inch-and-a-half long thorn in it – almost certainly from a hawthorn!), and put my mower back together.  A little test run in an obscure corner of the yard proved that the problem was fixed.  Yay!

For the hour or so preceding this happy resurrection of my mower, there were thunderstorms rumbling in the distance.  A couple times we got sprinkled on a little bit.  Just as I was putting the mower away, it started to rain a little more seriously – and we were getting almost continuous thunder overhead, sounding very close.  I couldn't see any lightning, so it must have been cloud-to-cloud lightning above the dense layer of clouds that was dumping water on me.

Now I'm about to put together a new backup disk.  The 3TB backup disk we've had for three years died a couple days ago, so I ordered the parts for a replacement.  This time, to choose the disks I used the drive reliability data gathered by BackBlaze to select HGST 4TB drives (HGST Megascale 4000.B).  The enclosure I selected is a RocketStor 5212, with a Thunderbolt interface, good reviews, and compatibility with OS/X software RAID.  This will become the Time Machine backup disk for our OS/X server and Debbie's iMac.  Hopefully this will be as easy as my past experiences with similar devices!
Posted by Unknown at (permalink) 2:30 PM No comments:

Are medical screening tests valuable?  The answer isn't always as clear as you might think.  Study the chart for breast cancer screening (mammograms) below to see one example of this (more details here).  Some kinds of screening (example: colonoscopy) themselves pose a risk, and though that risk is generally quite small so are the positive detections.  Mammograms involve exposure to high-energy radiation, which is a known risk for causing cancer.  All kinds of screening have a false-positive problem – and these false positives put the patient through a lot of stress and additional testing, which also has risks. 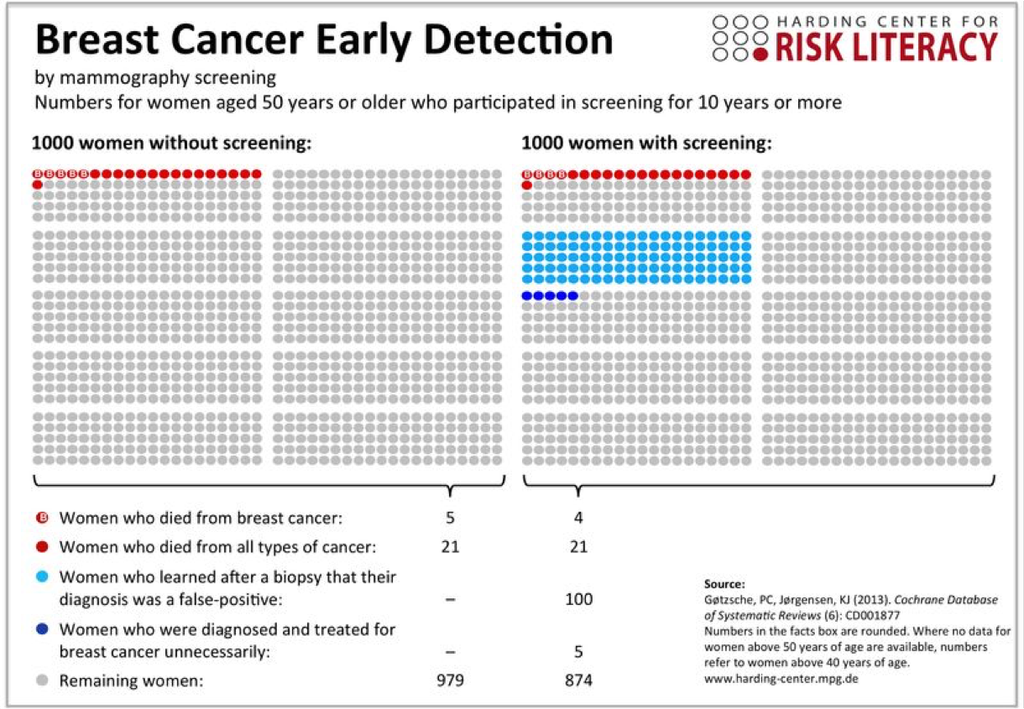 I can scarcely believe...

I can scarcely believe ... that I can do this in my browser!  A realtime, interactive, 3D display of all tracked objects in orbit around Earth.  Holy JavaScript, Batman!
Posted by Unknown at (permalink) 4:37 AM No comments: