The U.S. Department of Justice is looking for trial attorneys.  Specifically:

Labels: You're In The Best Of Hands 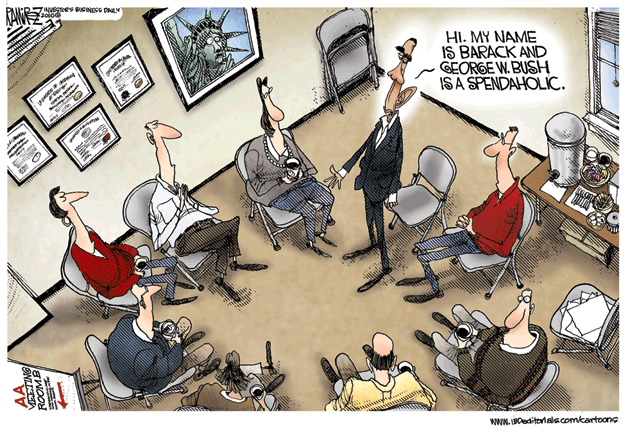 Posted by Unknown at (permalink) 8:39 AM No comments:

For the statue at right (click to enlarge), by Alberto Giacometti.

I'm just astonished when I see something like this.  I feel like I must be missing the genes that provoke the excitement and passion that someone must feel, given their willingness to part with that much money to own this thing.

Me, I'd pay someone to haul that thing away if it should somehow end up in my yard or my home.  I'd be afraid it would scare my dogs...
Posted by Unknown at (permalink) 7:29 AM No comments:

This About Sums It Up...


Remember when Ronald Reagan was president, we also had Bob Hope and Johnny Cash still with us...

Now we have Obama … no Hope and no Cash!

Posted by Unknown at (permalink) 7:17 AM No comments:

One of the IPCC report's more dramatic predictions was that anthropogenic global warming (AGW) would cause the Himalayan glaciers to disappear entirely by 2035.  Recently that date was shown to be entirely based on a mis-reported study by a single scientist who disavows that result (so much for the IPCC's peer-reviewed science!).  But the IPCC stands by their assertion that global warming is responsible for the shrinkage of the Himalayan glaciers.

AGW skeptics have long asserted that there were many other possible reasons why the Himalayan glaciers are shrinking.  One of the more commonly cited reasons was particulates in (mostly Indian) air pollution reducing the albedo of the glaciers.  Now along comes a study, reported by Science Daily, says that's exactly the case.

This is interesting for two reasons: the direct findings of the study, but also the fact that it's being reported in the mainstream science press.  I suspect that had this study published even just 3 months ago, Science Daily wouldn't have reported it at all, as it doesn't fit the AGW narrative.

But these days, it's cool to be an AGW skeptic...
Posted by Unknown at (permalink) 6:20 AM No comments:

It's the Time of Year We Think of the IRS...

Passed along by reader Simi L.:


At the end of the tax year, the IRS office sent an inspector to audit the books of a local hospital. While the IRS agent was checking the books he turned to the CFO of the hospital and said, "I notice you buy a lot of bandages. What do you do with the end of the roll when there's too little left to be of any use?"

"Good question," noted the CFO. "We save them up and send them back to the bandage company and every now and then they send us a free box of bandages."

"Oh," replied the auditor, somewhat disappointed that his unusual question had a practical answer. But on he went, in his obnoxious way.

"What about all these plaster purchases? What do you do with what's left over after setting a cast on a patient?"

"Ah, yes," replied the CFO, realizing that the inspector was trying to trap him with an unanswerable question. "We save it and send it back to the manufacturer, and every now and then they send us a free package of plaster."

"I see," replied the auditor, thinking hard about how he could fluster the know-it-all CFO. "Well," he went on, "What do you do with all the leftover foreskins from the circumcisions you perform?"

"Here, too, we do not waste," answered the CFO. "What we do is save all the little foreskins and send them to the IRS Office, and about once a year they send us a complete prick."

Posted by Unknown at (permalink) 6:14 AM No comments:

Twelve years ago, the Lancet (a British medical journal) published a study by Dr. Andrew Wakefield that linked autism to measles-mumps-rubella (MMR) vaccines.  This has led to legislation to ban the vaccines, civil suits against the vaccine manufacturers, parents refusing to have their kids vaccinated, and a significant uptick in the incidence of these diseases.

For years now, this research paper has been hammered by other scientists as the purest bunk.  The Lancet initially stood by its decision to publish, but now has formally withdrawn the paper.

In a just world, the damaging lawsuits and legislation would immediately stop.  They won't.  I'll bet some of them will still be in court 10 years from now...
Posted by Unknown at (permalink) 5:11 AM No comments:


Sitting together on a train was Obama, George Bush Jr., a little old lady, and a young blonde girl with large breasts..

The train goes into a dark tunnel and a few seconds later there is the sound of a loud slap.

When the train emerges from the tunnel, Obama has a bright red hand print on his cheek.

The old lady thinks:
Obama must have groped the blonde in the dark, and she slapped him.

The blonde girl thinks:
Obama must have tried to grope me in the dark, but missed and fondled the old lady and she slapped him.

Obama thinks:
Bush must have groped the blonde in the dark. She tried to slap him but missed and got me instead.

George Bush thinks:
I can't wait for another tunnel, so I can smack Obama again.

Posted by Unknown at (permalink) 5:09 AM No comments:

According to this web site, “obscura” are wonders, curiousities, or esoterica (though I couldn't find anyone else defining the word this way).  Whatever the correctness of that definition, the collection certainly is interesting.  The “Take me to a random place” at the top right is quite entertaining...
Posted by Unknown at (permalink) 4:00 AM No comments:

Here's what's happened in the past couple of days:

The University of Pennsylvania released their initial report on Michael Mann's behavior in ClimateGate.  Steve McIntyre reacts; as you might have anticipated, he's not impressed.  The probe continues...

Eric Raymond and James Delingpole think the ClimageGate fraudsters need to be named and shamed.  Eric believes it's necessary; James is reveling in vindication.  For the record, I'm with James Delingpole: I'm reveling, too (as if you couldn't tell!)...

Steve McIntyre points out that even a primary schoolboy should be able to get facts right – that is, facts that the IPCC got wrong.
Posted by Unknown at (permalink) 3:47 AM No comments: