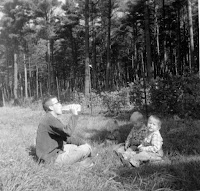 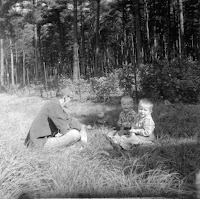 These two photos are dated (by the lab) February 1957.  My dad (the only adult) has a jug of milk, making me think we're at a picnic of some sort, though the rest of us don't seem to have anything to eat or drink.  Left-to-right the kids are my sister Holly, me, and my brother Scott.  I don't know where we are, but the pines in the background look like those at one of the nicer parts of the New Jersey pine barrens (but could be at any of about a bazillion other places, too).  There's a fence in the background that I don't recognize.  I don't think that photo was really taken in February; the way we're dressed I'd guess more like the preceding fall, perhaps October '56.  That would make me five, Scott almost three, and Holly about a year and a half. 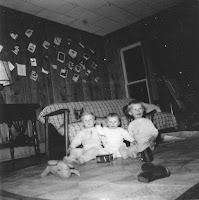 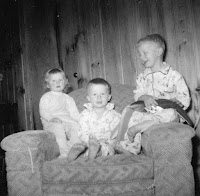 Here are two photos with the three kids close in age, both taken (I think) at Christmas time. The first photo is dated (by the lab) February 1957 (so Christmas 1956); the kids are Holly, Scott, and me.  You can see Synda lounging on the couch behind us.  There's an object just in front of me that I cannot identify.  The second photo is undated, but I think it's a year earlier, Christmas 1955.  The kids are Scott, Holly, and me.  I'm holding something stuffed, or perhaps inflated, but I can't tell what it is.  Both photos are taken in our living room, with furniture and other things we've seen in previously posted photos. 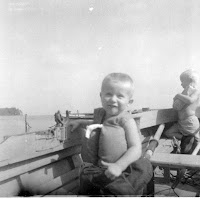 Here's Scott and I, in a rowboat.  The photo is dated February 1957, but we're dressed for warm weather – almost certainly this was taken the preceding summer.  That would make Scott about two and a half, and me almost four.  The oars are unshipped, and the anchor is in the boat's bottom, so we're probably tied up at a dock, getting ready to leave.  We're wearing kapok life preservers, the standard type back in those days (even though they were quite awful – killed about as many people as they saved, by becoming waterlogged!).  You can't tell from this photo, but they would have been bright orange with white cloth ties and black stenciled instructions.  I remember them well, and I'd recognize the smell they had immediately. 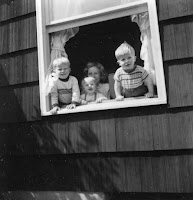 Finally, here's a photo that looks like another one in a series that we've seen before, with the three kids in it (this time, Scott, Holly, and me).  But this time there's an adult in the background, face partially obscured.  I'm pretty sure that's my aunt Bonnie, my mom's sister.  The photo is undated, but from our ages I'd guess it's from the fall of '55.  We're looking out a window of our house, probably one of the dining room's windows.
Posted by Unknown at (permalink) 2:25 PM No comments: 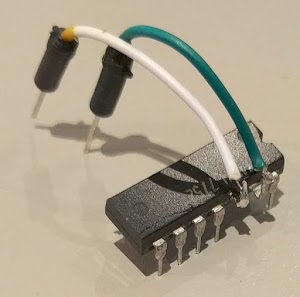 Dead bug hack...  Oh, I've done a lot of these – but all quite a long time ago now.  This is from a series of (excellent geekery) articles by Ken Shirriff on restoring a vintage Xerox Alto computer, currently dead but slowly coming back to life.

The part involved here (a 7414 TTL hex Schmitt trigger inverter) was one I used a lot in my own designs – the Schmitt trigger was very handy for cleaning up noisy signals.  However, that meant that typically this part was more exposed than any others to the hazards of that pesky real world – so I saw more failures in them than in any other part.  I often used no more than 4 of the 6 inverters in any given design, precisely to allow repair via a dead bug hack.  So this photo looked very familiar! :)
Posted by Unknown at (permalink) 8:44 AM 2 comments:

Paradise ponders...  So much happened yesterday!  I managed to get exactly nothing done that I had planned to do – and yet I was on the run all day long...

I was planning to catch up on my financial paperwork yesterday.  When I first sat down to my desk, it was covered with junk.  So I cleaned all that up, scanning the things that needed to be saved, putting things away, etc.  Next thing I know, it's time to go pick up our mail a the post office.  Then I notice the bird feeders were low.  Time to feed the birds!  Then it was time to take the puppies for a walk – a nice two-mile walk in the lovely temperatures.  We saw a hawk sitting in a field about 10' away from us.  Usually this behavior means they've got a kill on the ground that they're protecting – but when this one finally flew, we could find nothing where it had been sitting.  The puppies had a ball until finally Cabo decided she'd had enough of this exercise, and sat down in a lush alfalfa field (last photo).  Through her behavior, she told me quite clearly: I'm done.  You can go on walking, I'm sitting right here.  It took me a while to get her up. :) 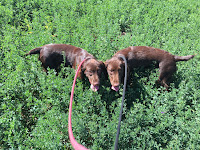 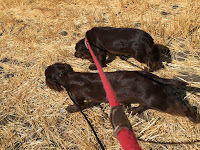 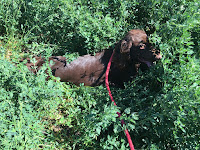 Then one of our neighbors (Gary S.) called and asked if I could come over to his barn around 5 pm, and help move some hay.  Of course I could!  Then just as I was sitting down to work again, Debbie texted me: another neighbor (Tim D.) was out putting up a barbed wire fence.  I went out to help, and it's good that I did: we just barely finished it before we got slammed with a rain storm (complete with lightning and thunder).  This fence is one he puts up every fall, to let his horses out into his alfalfa field after the last mowing.  Then he takes it down in the spring so that the field can be planted, fertilized, etc.   It's a four-strand fence, about 200' long.  It's surprisingly easy to put a stretch of barbed wire fence up, using T-posts between two solidly planted posts.  All you need is a T-post pounder, a fence stretcher, and some pliers.  All of these are simple, inexpensive tools, and all are hand-operated.  It's possible for a single person to do this, but the job is much easier with two.  It took about three hours for these two geezers to put up a nice, tight length of fence.  His horses will be very happy!

Moving the hay turned out to be a much different proposition than I had imagined.  I was expecting that we'd be heaving small bales of hay, the kind we had when I was a kid.  Those weight 60 pounds or so, and are not all that hard to throw around.  The biggest challenges comes when piling them high, as is often done.  But Gary was getting big bales delivered: eight bales weighing 1,300 pounds each!  These were going in his loft, the floor of which is 12' off the ground.  A neighbor was providing the hay, and delivering it to the loft with his (big, strong) tractor.  Gary had me and a half-dozen other people there to move those giant bales once they were just inside the loft's door.  We did it by using lengths of 4" PVC pipe as rollers.  We'd have the tractor set the bale down on 4 or 5 rollers, then four of us would push (hard!) to move the bale.  As a roller came out the back end, someone picked it up and handed to another person on the front end, who laid it back down.  It was like the railroad scene in Wallace & Grommit's The Wrong Trousers!  Once we got the bales roughly in place, we'd all get on once side and tip them over, thus freeing up the rollers.  After we were all done, Gary decided that next year he'd get the medium-sized bales – they weigh a mere 800 pounds! :)
Posted by Unknown at (permalink) 5:58 AM No comments: