Head Start was first implemented 45 years ago (in 1965), and during the course of its history has consumed well over $100 billion dollars (over $8 billion last year).  It's budget has risen every year by an amount well in excess of what you might expect from inflation and the population of impoverished kids.  From that perspective, it looks like any other classic government entitlement program.  Naturally and predictably, by any rational standard (including common sense), its bureaucracy is top-heavy with administrators.

Cato published a study last summer that looks at the actual effectiveness of Head Start.  This is something that the program itself has carefully avoided – another hallmark of a government-run entitlement program.  Cato's analysis is detailed and well worth reading.  Unlike most such studies, this one is very easily summarized:  Head Start is completely ineffective.

Hey, I guess that's just like most government programs, too!

I sure don't want these people running my health care...
Posted by Unknown at (permalink) 4:51 AM No comments: 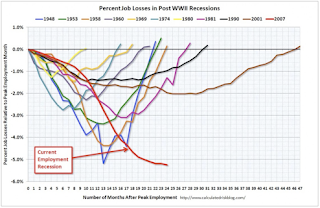 The graph at right (click to enlarge) shows the job losses over time in this recession (in red) as compared with other recessions since World War II.

It's not a happy picture.  By extrapolation, we haven't hit the job-loss bottom of this recession yet.  Other indicators are improving, but for many people job losses are what hits home the worst – and clearly we have a ways to go yet on recovery in this recession.

More here.
Posted by Unknown at (permalink) 4:38 AM No comments:

Most of us can do little beyond the simple contribution of money to help the Haitian people devastated by the earthquake.  If you're like us, and would like to do what Americans have always done in such situations...I've added a widget at right to make it easy...
Posted by Unknown at (permalink) 4:33 AM No comments: